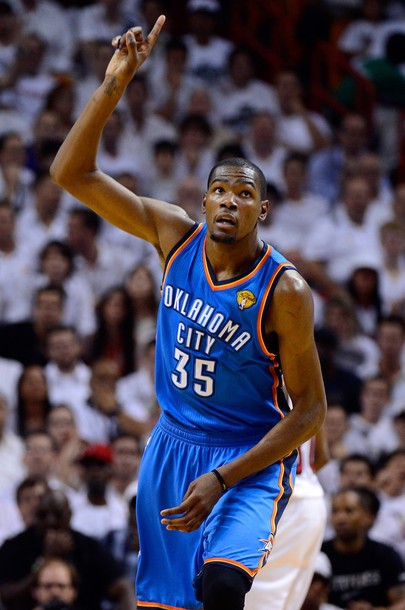 Kevin Durant vs. LeBron James is shaping up to be one of the greater basketball rivalries of all time. While James currently has the upper hand, winning last season’s MVP and the NBA Finals against Durant’s Oklahoma City Thunder, it is still a close gap. Durant won the scoring title for the third year in a row and stole the show at the Olympics in London this summer.

Even though Durant made it to the Finals and his team continues to improve every year, it is a pretty popular opinion that the Thunder are behind the Lakers and LeBron’s Heat this season in competitino for that coveted championship.

A lot of people think since Durant and his teammates Russell Westbrook and James Harden are so young, their time has yet to come, but Durant says that is not the case.

“I’ve heard a few times, in three or four years, this league is going to be yours. . . . I don’t like that. Because I think I’m established now. My time is now,” Durant said. “I feel as though I’ve proved myself these last five years that I can be one of the top players in the league. I’ve got a long way to go to being the ultimate best, but I think my time is now. And I’m starting to enter my prime.”

If Durant is right and we have not seen his best yet, then the league better watch out. He is one of the greatest scorers of all time already, proving time and time again to be nearly unstoppable when he is on top of his game. And he will not be 24 for another month.

I agree with the consensus that Durant’s Thunder will be playing the underdog role to the Lakers and Heat, but I have also learned never to doubt what Durant is capable of. He will have a tough road to get his first NBA title, but he seems confident and prepared enough to do it.