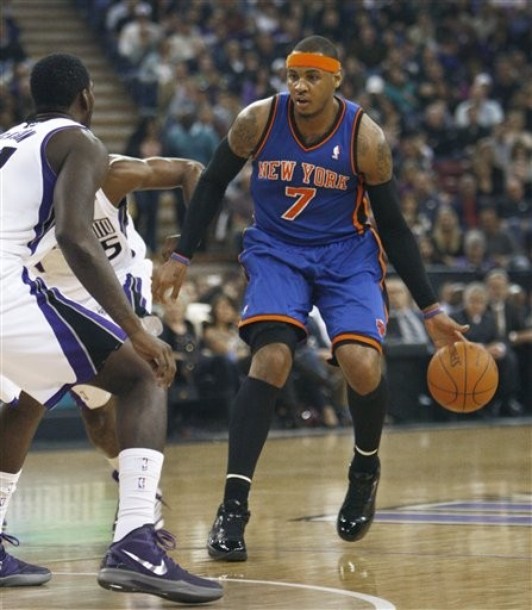 Carmelo Anthony is an NBA All Star. He was a National Champion at Syracuse, two-time Olympic Gold Medalist, and he could even win a third Gold down in Rio four years from now. But all that doesn't do enough to escape one simple fact: Carmelo Anthony's friends are better at basketball than he his.

Not his friends from Syracuse, or Baltimore, or anywhere else either, but the NBA circle he associates himself with. He's not as good as those guys. Or at least, to be fair, he's not as accomplished. I'm not sure he ever will be either.

His star will always be loosely linked to the careers of the guys he came in with; LeBron James, Dwyane Wade, and so on. It's also linked to this most recent class of Olympians too. But he's not amongst the NBA's elite. I think some of that has to do with his lack of desire on the defensive end. The remaining drivers I'm not as sure.

Ken Berger recently touched on this subject for an article at CBSSports.com, where he offered the following:

Anthony just completed his ninth season, making the playoffs every year but advancing out of the first round only once. His gifts as a scorer are beyond reproach, but there has to be more from Anthony if he is to join the likes of James and Dwyane Wade — contemporaries from the 2003 draft — in the conversation about those who will carry the NBA into the post-Kobe Bryant years. In fact, with the likes of Paul, Williams, Durant and Russell Westbrook, Anthony already is in danger of being passed by fellow stars who came into the NBA after he did. Being shunned in this conversation has long irked Anthony, who has brushed it off as unfair, uninformed criticism. A couple of years ago, while he was still a Nugget, Anthony told me, "If people are having talks and I'm not in the conversation as a top-five player in this league, then they shouldn't be talking about it." Since then, the greatest success Anthony has experienced involved a flexing not of his on-court talents but his off-court muscle in orchestrating the trade that sent him to New York with a max extension and the keys to the franchise. Thus far, he has a jettisoned coach, two first-round playoff exits and the departure of point guard Jeremy Lin to show for it.>Berger's comment regarding Lin was made tongue-in-cheek, but the rest of what he said is valid. Furthermore, I think Anthony already been passed by Chris Paul and Kevin Durant on the NBA pecking order for sure. Russell Westbrook's not too far behind either. I mention all this to say that it's not necessarily a bad thing. Anthony's still great, he's just not on that Mount Rushmore of the NBA's greatest. To reference back to that NBA Draft of 2003, he's more Chris Bosh at this point than Dwyane Wade. Still an All Star to be sure, still an explosive talent, but not amongst the best of the best. Maybe he was once, maybe could've been, but it doesn't look like he will be. And maybe, we should just all stop asking him to be something he's not. Unless, of course, he wants to somehow bring an NBA Title back to New York. Then all of this would sound ridiculous.