Believe it or not, the NBA's regular season is two weeks away. To get you ready, Crossover Chronicles will be profiling a team each day for the next few weeks. This week is the Southwest Division. Today is the Memphis Grizzlies.

The Grizzlies feature one of the best starting lineups in the league, mixing a solid group of veterans that work well together. Some like Rudy Gay and Mike Conley and Marc Gasol seem to be in their prime or just hitting their prime while players like Zach Randolph and Tony Allen are more than serviceable and more than able to contribute on the downsides of their careers.

Memphis, even with Randolph missing most of last season, was a very dangerous team. The Grizzlies play solid defense, have a bullish front line led by Marc Gasol. Gasol turned in an All-Star caliber year with 14.6 points per game and 8.9 rebounds per game. It seems like Gasol is due for continued improvement even with Randolph returning and his rugged defense is exactly what the Grizzlies need.

That is where this Memphis team finds its identity. Tony Allen starts solely because of his stellar defense on the perimeter. Rudy Gay, one of the most underrated and unknown stars in the NBA, is a capable scorer, is deadly on the fast break and is a solid defender. 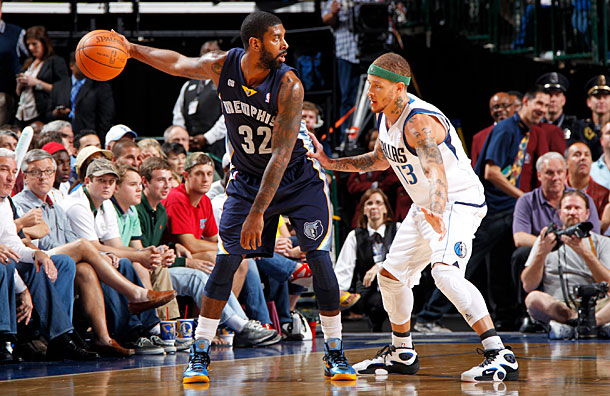 Losing O.J. Mayo hurts this Grizzlies team. Memphis relied on Mayo to provide some scoring punch off the bench and a really bright spot for this team's future. While many of the players on the Grizzlies are in their prime or preparing for the back half of their careers, Mayo was a rising star and someone who could potentially become a star.

Mayo averaged 12.6 points per game, shooting 40.8 percent from the floor in 26.8 minutes per game off the bench. Mayo accepted his role off the bench and played well, but he clearly wanted the chance to start. That might be why he opted to go to Dallas.

It leaves the Grizzlies with a pretty sizeable hole on their bench and someone is going to thave to step up. Each player on that second line of the depth chart above has something to prove this season and none of them have really shown the kind of consistency to take over the Sixth Man role and anchor the second unit offensively.

Certainly Jerryd Bayless, Marreese Speights and Wayne Ellington have the talent, but in their short careers to this point they have not shown the ability. Lionel Hollins might have to resort to bringing Zach Randolph off the bench like he did last year when he was afraid to disrupt the team's rhythm right before the Playoffs and he wanted to work Randolph slowly back into the rotation after missing the majority of the season. The Grizzlies are going to go through some changes.

A new ownership group is set to take over the franchise and that usually means change is coming as the new owner wants to bring in his people and build the team in his image. Perhaps the Grizzlies are in a different situation because of all the success Chris Wallace has had building up this franchise and getting them to this point. The last two years have been some of the best in franchise history.

Yet, there is still the sense the team is in that awful limbo in the middle of the Western Conference — not quite good enough to say they are competing for a championship, but perhaps one or two pieces away from doing so. And clearly Memphis is cutting some costs as the organization let its most valuable young asset leave in free agency.

That seems to suggest that time is running out for this run for the Grizzlies. Will Memphis spend to keep Marc Gasol, Mike Conley and Rudy Gay? What is Zach Randolph's future with the franchise? These are big questions that Memphis will have to answer very soon. And under new ownership.

Perhaps this year will be a step back to restock the bench for a future run with the players currently in the core group.

Have thoughts or predictions on the Grizzlies? Leave them in the comments below or drop us a line @CrossoverNBA on Twitter or join the discussion by using the hashtag #GrizzliesDay. We will be back with a closer look at the Grizzlies throughout the day.