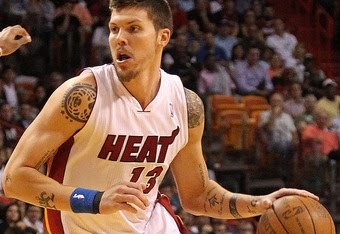 Mike Miller waited until the very last game of the NBA season to make his mark. The Miami Heat sharpshooter had a very underwhelming season, missing 27 of the team’s 66 games and not logging a lot of minutes when he did play.

But in Game 5 of the NBA Finals against the Oklahoma City Thunder, Miller went seven for eight from outside the arc, scoring 23 points and reminding everyone that he can still nail the three-pointer right before we all went on summer vacation.

One game does not make up for a whole season of injuries and underperformance, but the 32-year-old Miller says he is getting himself in shape and getting ready for next season.

Nice to know Mike Miller tweets like a 14-year-old girl.

Heat President Pat Riley has said the team would not use its amnesty option this offseason, but maybe he did not consider Miller would be returning after all the surgeries the past two years. Miller is due $6.2 million next year which makes him way overpriced on a team that is already shelling out loads of cash to keep its All-Star core intact.

While Miller may be able to return to the NBA for the final three years of his current contract. His life afterward probably will not be with the Miami Heat. He would have to take a massive paycut in his next deal, if he makes it that far. During his 12-year career, Miller has played for five different teams and just got his first NBA title.

I love to see guys stick around and play for as long as they can, but maybe it is time for Mike Miller to ride off into the sunset. Why not go out on top? He could always say that in his last NBA game he was on fire, he could not miss and he helped the Heat win their championship. I would rather go out on that note than him inevitably only playing half a season and dwindling away until he is no longer of use to any team.

Think about it, Mike.