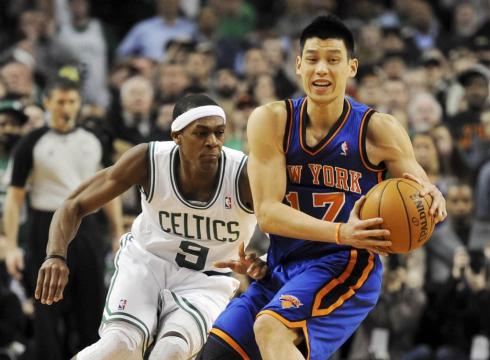 With Jeremy Lin headed off to Houston to play for the Rockets, he and Rajon Rondo are no longer division rivals. The two point guards will only see each other twice next season instead of the four times they would play if Lin was still on the Knicks. But there is still a potential rivalry brewing there if Lin can step up and play to his potential.

Rondo gives a lot of credit to Lin for his breakout season last year, but still thinks things might be a little tougher for him from now on.

"It's a different season," says Rondo. "He's going to be in all the scouting reports. I'm sure he's up for the challenge as well. He's played against the best so he knows.

"I hope he has success with the Rockets, except against the Celtics. We plan on beating the Rockets pretty bad this year and hopefully I have something to do with it. But he is going to compete and I wish him well."

Rondo is right in that Lin will have to really bring his “A” game to Houston. Teams now have film on him and analysis of his play. He’s not taking anyone by surprise anymore.

This season will be the true test of Lin’s ability to play point guard in the NBA. We will finally be able to determine whether what happened for a couple weeks in New York last year was a fluke or signs of the start of a productive career.

My money has always been on fluke. I think before Lin got injured he was already exposed as being a turnover-prone point guard that lacked the right court vision. Maybe in the right system he could prove me wrong but I think he is going to have a harder time in Houston than he did in New York, playing on a team with less overall talent.

Rajon Rondo is one of the NBA’s elite point guards. Is Jeremy Lin on his way to join him? I think we’ll find out pretty quick.