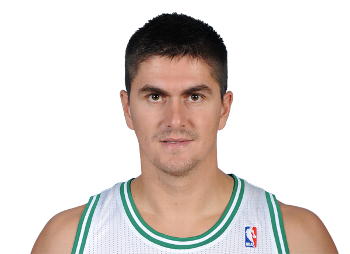 I have done the research. Darko's name is the punch line to 85.3 percent of all NBA jokes. He is the NBA equivalent of ".. .and what's the deal with airline food?" at this point.

And now he is going to be a Celtic.

For Darko, well, his name is Darko, first of all. Secondly, he was the second pick in a draft ahead of Carmelo Anthony, Chris Bosh and Dwyane Wade… which might make him the worst draft pick of all time (sorry, Michael Olowokandi).  I count seven second round picks in the 2003 draft (Jason Kappono, Steve Blake, Zaza Pachulia, Matt Bonner, Mo Williams, James Jones, and Kyle Korver) that have been significantly more productive NBA players than Darko.

So being an uber bust makes us pay closer attention to him than these other guys because, partly, we wonder if there is ever a glimmer of hope that he will be productive. Ever.

Now he is with Boston, his first championship contender since his victory cigar days in Detroit. So we are asking the question one more time. Darko is stepping into a veteran-laden team with a ton of All-Stars and a championship pedigree. He is walking onto a team with Kevin Garnett as the vocal leader, with Rajon Rondo as the floor general, and with Doc Rivers as the coach. If you cannot succeed with one of the most skilled big men, perhaps the best pass-first point guard, and a coach considered no worse than second among the NBA elite… you cannot succeed anywhere.

Beyond that, Darko is probably 11th or 12th in the rotation at best. He will get emergency minutes in case of injury or foul trouble. Whenever he is in there, he will be on a second unit that features Jason Terry, Courtney Lee and Jeff Green… all scorers to varying degrees who can penetrate and draw attention.

If Darko can learn from the leadership of a Kevin Garnett and Doc Rivers, simply catch Rajon Rondo's passes (or whomever might be throwing him the ball), and rebound whatever misses might come his way, he will actually be a productive member of a very good Eastern Conference team.

I cede the floor to the representative from Minnesota, Mr. Zach Harper.

Yes, he'll be with Kevin Garnett this time but he's been with Rasheed Wallace and Ben Wallace before. He's played under Rick Adelman, Lionel Hollins, Larry Brown, Flip Saunders, and Mike D'Antoni. It's not like Doc Rivers will be the first good coach to ever throw him into a scheme. There is no realization for him.

I wish you the best in these dark(o) times. He won't be fun, even in the minuscule moments he's on the court. He'll crush your soul in ways losing a Game 7 to the Lakers in the NBA Finals can't even compare to. He's a numbing agent that Novocain will never be able to compete with. He is a pebble in your shoe that will never shake out. He is a sliver under your fingernail, that can't be tweezed out. You know what they say about teaching an old dog new tricks. He won't learn them if he has spent nine years not listening to you and making almost $47 million in the process.

It is hard to believe a guy going into his 10th year who, at 27, has already made more than 23 times what the average college graduate will make in a lifetime (that is an actual statistic), will do anything besides exactly what he has done previously.

He is a lazy goof who does bad things that make you say "that's a very Darko thing to do." Not only will he not learn from KG, he will piss KG off so much that Garnett will unleash a fury akin to Nazis opening the Ark of the Covenant in Raiders of the Lost Ark.

Will he contribute to the Celtics? The better question might be when will he be cut by the Celtics so he can collect a paycheck for doing nothing and go home?

I am going to backtrack for a second to hit this point one more time for effect:

Darko Milicic… widely regarded as one of the NBA's worst ever draft picks and a punch line to countless NBA jokes, has made nearly $50 million in the process of earning that reputation. So… who is really laughing right now? He is a tall guy on a team that does not have tall guys. The Celtics need tall guys because a pretty good tall guy, Andrew Bynum, now lives in their division. So a tall guy with six fouls, regardless of how hate-able he is, has value. He might spend some games as an inactive in a suit. But his presence allows another tall guy who is not very good right now, first round pick Fab Melo, to go to the D-League and work on his game while Darko plays the mop-up role.

It is a minimum contract, so if he is so truly horrible that he becomes the subject of a team murder plot, Boston can cut him with virtually no impact to the team's bottom line.

This will be a thousand-word piece on a scrub. Why?

Because his name is Darko.

Because Joe Dumars stamped a glimmer of hope on him that fans of every team he plays for will notice. Because he has been such a spectacular failure, we still pay attention to him.

The point is, as long as you do something spectacularly, whether it be succeed or fail, people will pay attention.

That may be good. It might be bad. But I do know one thing.