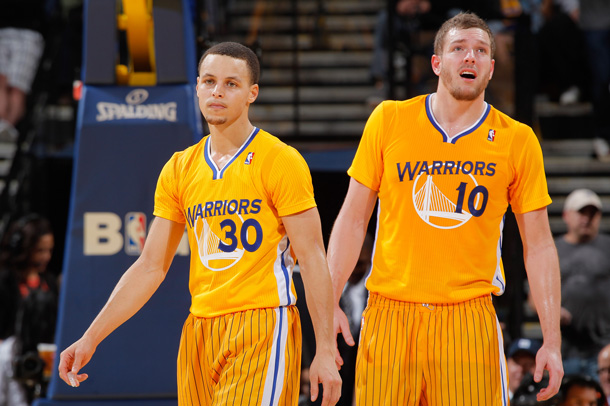 With the 2013-14 NBA regular season tipping off today, the road to revitalizing the Golden State Warriors has not been an easy trek to haul in Oakland, but the pieces of the puzzle have come together nicely.

After Golden State failed to make the postseason after winning 36 games during 2010–11, then-head coach Keith Smart was shown the door after the new ownership group of Joe Lacob and Peter Gruber decided it was time to move in a new direction.

Mark Jackson was hired to run the team, new General Manager Bob Myers steadily made moves including dealing Monta Ellis, and a finally healthy Stephen Curry made it rain in “The Bay” all the way to a playoff run that included knocking off the Denver Nuggets in the first round last season, before falling in the second round to the San Antonio Spurs.

That playoff run has fans excited, but there is still a sense that they are just those Warriors that struggled to make the Playoffs for nearly a decade. This certainly is not an organization used to having championship expectations. And they have to prove they are more than a flash in the pan to the rest of the league.

"In the past," Lee said, "you could see teams almost playing somewhat disrespectful against us, like they didn't think we had a chance to beat them. Now I think they'll come in giving the best effort for different reasons. … The easy answer is for us to ramp it up some."

If they can copy that Playoff performance, Golden State will more than ramp it up. They will be in the mix for the big prize.

The Warriors have now become one of the “must see” teams in the league which can only mean one thing: a bigger target on their back.

"I think the Warriors are a legitimate contender to get to the NBA Finals, but I believe there are six teams in the Western Conference that could conceivably get there," said TNT analyst Steve Kerr, a five-time NBA champion as a player who was the G.M. in Phoenix for three years.

"I think it gets harder. It's a little bit like Oklahoma City the last couple of years. Once the honeymoon is over, everybody is expecting big things, the pressure comes.”

That pressure should be alleviated by a number of key offseason additions meant to bring some veteran experience to the mix, particularly veterans with playoff experience to go along with the Warriors scoring youth movement of Curry, Harrison Barnes and Klay Thompson: Golden State signed free agent Andre Iguodala, traded Richard Jefferson, Andris Biedrins and Brandon Rush and draft picks to the Utah Jazz and inked Marreese Speights, Jermaine O'Neal and Toney Douglas.

Throw in David Lee and a freshly extended Andrew Bogut and it is no wonder this team has “league pass alert” written all over it.

If the Warriors can stay healthy, they just might “ramp it up” all the way to the NBA Finals this season.