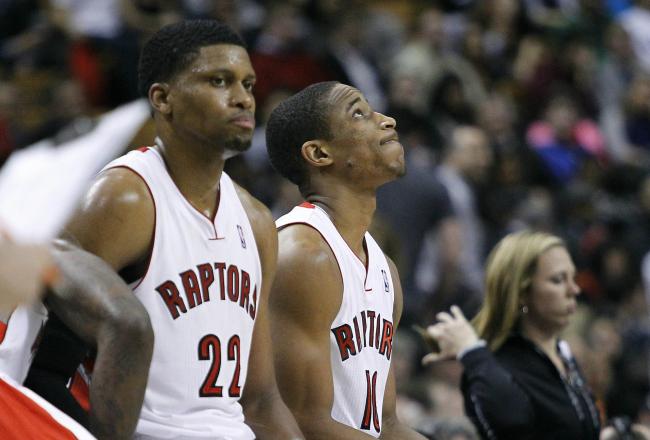 Before the start of the 2013-14 NBA season, the phrase “tanking in Toronto” was not part of the basketball lexicon. But that was then.

Coming off their overtime loss on Sunday to the Portland Trail Blazers and entering Wednesday’s game at Philadelphia, the Toronto Raptors are 4-7 and are on a two-game skid, while those same Sixers who many thought would struggle out of the gate sit atop the Atlantic Division despite being 5-7. Really?

So what is up with the Raptors?

They would probably like to know as well. The one thing they do understand is that the numbers are not in their favor right now: Toronto ranks 15th in the league in offensive rating.

You would not think with guys like Rudy Gay and DeMar DeRozan that would be the case, but going inside the numbers shows exactly why the Raptors are 3-7 over their last 10 games.

Ryan Wolstat with the Toronto Sun breaks it down:

Top scorers Gay and DeRozan take more shots than any other combo in the league, yet are shooting just 38% and 40% from the field, respectively. They are averaging 38.5 shots a night between them, but only seven of them come from behind the three-point line and they average just 4.3 assists a night.

Raptors HQ goes even deeper, by not only analyzing suspect statistical offensive categories on Toronto but video sequences showing some underlying issues:

The Toronto Raptors prior to this past weekend ranked 20th in True Shooting Percentage (TS%), 25th in Effiective Field Goal Percentage (eFG%) and 30th in pace…

However imagine if Toronto could pull up those other offensive metrics? Suddenly fans probably wouldn't be staring at outcomes like [Sunday’s] OT loss to the Blazers.

The offensive and defensive struggles for the Raptors can be highlighted best by focusing on their fourth quarter and overtime stretch. In the final four minutes of the game, Toronto went on a 19-6 run to force overtime and it looked like that momentum would continue in the extra quarter. But then they fell apart on D and could not convert on the other end either – the Raptors were outscored 14-2 in the final 2:30 of overtime, as the Blazers snuck out of town with the win.

We cannot put this all on two guys (Gay and DeRozan) and the reality is the Atlantic Division is horrible and it is there for the taking if Toronto can make improvements moving forward.

But it has to start with Toronto's stars first.