Some things about organized sports seem to be so easy to see; adjust to; and implement.

Yet, smart reforms are frequently ignored by the governing bodies of these sports or the commissioners who wield considerable power over them.

It gets to be more than a little exasperating… for fans, journalists, pundits, and most of all, the competitors themselves.

Football doesn’t allow pass interference, one of its two or three most important penalties, to be reviewable. The NFL also needlessly complicates dozens of rule interpretations, but even with all that clutter, a few replay-review policies cry out for installation… yet are not brought to life.

Baseball finally allowed replay on safe-out calls this season, but the sport could have made that move a decade earlier if it wanted to. Baseball still needs to work on putting cameras at the bottoms of foul poles or something to that effect. Baseball needs to solve that particular fair-or-foul-ball puzzle. (Football, at least in championship games, should similarly be able to put cameras at the base of uprights to monitor kicks. Yet, the sport has not done so.)

Basketball, at the pro and collegiate levels, has a whole mess of reforms it should have locked in several years ago: reducing timeouts, making endgame fouls more punitive, and so on. While we wait for those changes to emerge, one would like to think that the league’s replay-review policies can be tweaked to bring about fairer and more precisely proper outcomes.

Splitting an atom is supposed to be hard. Devising a supremely sensible replay-review policy shouldn’t have to be.

Yet, you’d think this is the case, given the inadequacy of the NBA’s current policies, exposed before the nation each of the past two nights in the playoffs.

Tuesday night’s Reggie Jackson drive for the Oklahoma City Thunder — the endlessly-discussed sequence in the final 15 seconds of Game 5 against the Los Angeles Clippers — served a significant purpose: It brought to the attention of Americans the huge, yawning loophole in the NBA’s replay-review policies.

Wednesday night, LeBron James’s uncalled foul on Paul Pierce in the final 10 seconds of Game 5 of the Brooklyn Nets-Miami Heat series put the “Reggie Jackson” scenario from Tuesday on the front page of the playoffs yet again.

Two nights, two Game 5s in the second round of the playoffs, two final-15-second controversies that cheated two teams out of a pair of foul shots. This should not be acceptable for a major pro sports league, and if the NBA is wise, it will amend this policy for the 2014-2015 season.

Let’s explain why this reform needs to be installed in the coming offseason:

First, let’s fill in the background attached to each of the past two nights in the NBA playoffs — Tuesday in Oklahoma City and Wednesday in Miami:

You will find plenty of people who think that being able to change a foul call (from a non-call to a call or vice-versa — it doesn’t matter which direction) opens up Pandora’s Box. The claim is understandable. If you can review one kind of foul, you can presumably review another. There is a substantially subjective quality to a lot of fouls, so the reviewing of a foul will naturally create a lot of contentious situations, more than the NBA or its on-court officials might like.

Yet, if the league and its officials can cast aside worries about their reputations and the politics of reform, they’d come to the core realization which undergirds the expansive use of replay in any sport: The use of replay is not, in itself, a criticism of officials. Repeat that 1,000 times and write it on a blackboard if you need to. Replay is supposed to be an official’s friend in this modern age of sports, when the athletes are bigger, stronger and faster, when competition is plainly harder to officiate than it used to be.

Why are refs such targets for fans, talk-show hosts, and players these days? Sure, being a referee is not what the cool kids ever do; it’s a psychologically difficult job and will always be thus. However, an underappreciated reason for fan and media ire toward refs is that when a bad call is made (this is especially true in basketball, more so than in the NFL or college football), the chances are that replay was not available as a means of overturning the call.

It’s a simple concept: The more a call can’t be changed by technology or an outside system, the more anger will flow from fans and media if the call is wrong. There should not be any mystery about that claim. If replay was able to affect and change more calls, ire toward referees would subside. It wouldn’t go away, but it would decline considerably.

Look at baseball: Managers aren’t getting tossed out of games as much, because they can challenge safe-out calls now. Who needs a finger-pointing tantrum with the crew chief when you can simply signal for a challenge? Shouldn’t that be the goal for every sport? It took baseball far too long, but at least baseball finally found religion. It’s long past time for the NBA to learn more about the ways in which its replay-review policies have fallen short in these playoffs. 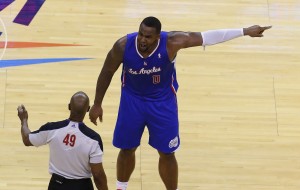 The Los Angeles Clippers felt they were robbed by the refs in Game 5 against the Oklahoma City Thunder on Tuesday night. In truth, OKC was deprived of two foul shots. The decision to give OKC the ball, though perhaps not correct according to a strict interpretation of the rulebook, was a just one. In the future, the NBA needs to go one step further and allow officials to call a foul if they find a missed foul call in their replay review.

Let’s get to the heart of the matter on the out-of-bounds replay review we’ve seen each of the past two nights:

It’s an A-before-B point of linear logic that is unassailable: If Defender A hits the hand of Ballhandler B on a drive, causing the ball to go out of bounds, that’s a rake. If you reach in for the ball and get flesh, that’s a foul at any level of basketball. If said foul causes the ball to go out of bounds, it naturally takes primacy over and against any out-of-bounds ball ruling. The foul is what’s supposed to be called and enforced. Again, this should not be a point of debate among reasonable people. Reggie Jackson of OKC should have been awarded two free throws on Tuesday, and Paul Pierce of Brooklyn should have been given two foul shots at the end of Nets-Heat Game 5 on Wednesday. If justice had been served, foul shots would have been the proper outcomes of those two much-examined sequences.

The true debate here is this: When looking at replay to review an out-of-bounds call, should referees (or a replay command center) be given the ability to call a foul if they see that they missed a foul call in real time? That is a matter of jurisdiction and procedure, and as said above, it’s reasonable to wonder where the line should be drawn if fouls are allowed to be reviewed to any extent. However, there should be NO debate about the idea that a hack on the arm — if causing a ball to go out of bounds — needs to be called and enforced more than any out-of-bounds possession ruling.

Accordingly, the NBA should be able to implement a policy for next season in which replay reviews — should they uncover multiple missed calls — can allow officials (or a replay command center) to change multiple mistakes or, at the very least, amend the primary call in a series of missed calls. Being able to change the primary call (i.e., a foul which causes a ball to go out of bounds) should be the goal of any replay system and its collection of review policies.

Should this power be granted throughout a game? Probably not. Four full quarters of reviews would be a headache. However — and this is especially true for the playoffs — fourth quarters are so consequential that it seems the entire 12-minute period should be subjected to elastic replay review. The final five minutes would represent a perfectly appropriate solution, since it’s quite possible to have a game-changing call with 3:30 left in regulation.

What about the reviewability of fouls in particular? Games would take over three hours if fouls could be reviewed throughout a game, but they probably should be reviewable in the final two minutes if not the final five. Subjective calls referring to post play, moving screens, and off-ball or back-to-the-basket actions would rarely get overturned, but the more objective foul calls (ones that are easier to spot — a whack on the shooting elbow, a smack on the shooting wrist, etc.) would get called upon review if they were missed in real time.

Let’s acknowledge what’s happening with baseball: Not every kind of call will be successfully overturned or upheld. Some calls will slip through the cracks, making fans angry that the promise of technology has not led to a 100-percent success rate. However, let’s not make the perfect the enemy of the good. Many more incorrect (live) calls are being changed into correct calls thanks to the use and availability of replay.

This can happen in the NBA.

With a simple change in policy, out-of-bounds reviews that uncover missed foul calls can be allowed to… yes… allow fouls to be called after looking at a monitor.

This is a simple tweak in a replay-review rule which allows fouls to be called if they were missed in real time.

We shouldn’t have to argue about what the rulebook does and doesn’t allow. We should only be interested in what the proper call is… and isn’t. Amending policy will lead the NBA where it needs to go. The incidents we’ve seen the past two nights in Oklahoma City and Miami will no longer be sources of controversy, contention  or confusion. We’ll sleep better and longer. We’ll carry less anger in our hearts.

The sports world will be better.

Come on, NBA. Get this one little thing done in the offseason, and we can move on with our lives.