The Indiana Pacers’ severe injury problems have been well-documented so far this season and they started even before the game began, when Paul George broke his leg during a Team USA scrimmage.

George is Indiana’s best player and there is no doubt about that. But, Indiana has been hit especially hard at the guard position, where Rodney Stuckey, C.J. Watson and George Hill are all out. That meant, before the Pacers signed A.J. Price, Donald Sloan — a journeyman who starred at Texas A&M in college — was the only healthy point guard Frank Vogel had.

Obviously, all of the guards that were normally ahead of him on the depth chart being injured has given Sloan all the playing time he could want in the starting lineup, which he certainly has taken advantage of. In five games this season, he is averaging 36 minutes, 15.6 points, 5.2 rebounds and 6.6 assists per game.

Prior to this season, his career highs were of 24.3 minutes and 6.6 points in a quarter of the 2011-12 with the Cavaliers. Even though the Pacers are just 1-4, Sloan has stepped up and even scored a career-high 31 points on Wednesday in a loss to the Wizards.

It is a far cry from the Sloan who has played for four NBA teams since 2011 and multiple D-League and foreign times in the same time period. 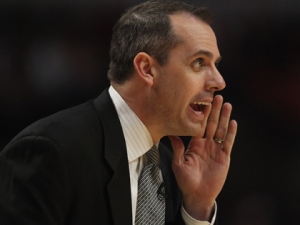 His playing time will probably decrease as other Pacers get healthier but he appears to have found a home in Indianapolis. If nothing else, his play has gotten the attention of the other teams in the NBA, who would not hesitate to give Sloan’s agent a call should he get released, or the Indiana front office via a trade.

In his prior stops, the Dallas-area native showed promise with his play, but only when given any sort of sustained playing time. The problem was that with the Cavaliers, Hornets and Hawks, the time just was not there for him and either was the consistency needed to be a relied-upon player.

That is the beauty of the NBA, and professional sports in general, in that when one players goes down, there are many others willing to take the open spot. Often, the replacement doesn’t do too great. But, sometimes, the replacement works out and that’s the type Donald Sloan is on his way to become.

I'm a New York native who has been a Nets season ticket holder, in both New Jersey and now Brooklyn, since birth. Northwestern University (Medill School of Journalism) '18