Not every team gets to be the Spurs and sit through a decade-long window of championship contention with a never-ending, revolving door of great players that fit a role and stars who are completely selfless. Those just do not exist everywhere — and they all seem to be in San Antonio.

Certainly, the Thunder are in that boat at the moment.

It has been two trying seasons for the Thunder. So close, yet so far. 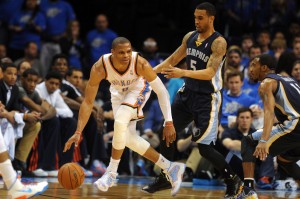 Russell Westbrook’s knee injury has played a part in the closing of the Thunder’s window. Photo by Mark D. Smith-USA TODAY Sports

But the bottom line matters most — especially with free agency upcoming for Kevin Durant and rumors already starting that his hometown will be ready to receive him with, possibly, a better team. Thunder fans are mildly worried at this point. Another year without a championship could increase that concern.

So what did the Thunder do to make up for two straight years without a Finals and, thus, no championship?

Well, in the immediate aftermath of the Finals trip, the Thunder decided not to meet his five-year, $78.8 million extension. Harden wanted to be paid star money and the Thunder were not going to give it to him. Oklahoma City decided to move him along rather than consider trading him later after the deed of winning a title was done.

They cashed him in for essentially Jeremy Lamb, Steven Adams and Kevin Martin.

Martin never lived up to his billing and never had the ability to replace what Harden gave the Thunder. Especially after Westbrook went down.

That deal though did not work out as Martin was not a capable replacement. He left in free agency to the tune of a four-year, $27.8 million deal. Martin’s modest 14.0 points per game certainly did not earn the faith of the Thunder brass to bring him back long-term and fill that sixth man role. Still the decision was pretty overt.

It is a decision the Thunder have made time and time again. Cast off the veteran and refuse to make the big payment in favor of investing in younger, unproven players.

From Yannis Koutroupis of Basketball Insiders:

Durant and Westbrook are doing all they can on the court, but I don’t think the same can be said about ownership and management off of it. Unless the young guys that Presti is banking so heavily on really step up, I think this could go down as another disappointing season since the San Antonio Spurs, Los Angeles Clippers and Golden State Warriors all look better on paper, with a couple other Western Conference teams like the Houston Rockets, Dallas Mavericks, Memphis Grizzlies and Portland Trail Blazers capable of giving them a tough series as well. If so, there’s one more season separating Durant from free agency, and it’s hard to imagine him sticking around when franchises that are more willing to spend to put together a championship team are coming after him extremely hard.

The Thunder have clearly made a move to put a lot on young players like Steven Adams, Jeremy Lamb and Reggie Jackson. The big free agent signing coming off a year when the Thunder fell short once again of the Finals was Anthony Morrow, a six-year journeyman noted for his strong 3-point shooting but little else.

That scoring oomph off the bench is still missing and a bulk of the load will still fall on Durant and Westbrook.

One has to ask how much longer they will be willing to carry the younger guys along with them and how many missed opportunities the franchise can take.

This is not only a Durant problem. Reggie Jackson, the Thunder’s promising young backup point guard, said earlier in training camp that he would one day like to be a starter and envisions himself in that role. That leaves another difficult decision for the Thunder — both with financial and roster consequences — to come this summer. Jackson had a breakout year last year as the sixth man for this team and is due an extension by October 31 or else he hits restricted free agency.

The Thunder, it should be noted, have never paid the luxury tax since moving to Oklahoma City. They have not really come close. Certainly waiting for Kendrick Perkins‘ contract to expire at the end of this season. That will open some cap space up to retain a player like Jackson and maybe add another supporting veteran to the roster. And the mercenary market in January will open up and give the Thunder a potential player to bring into the fold.

But it does not serve the long-term problems the Thunder might have.

And the long-term problems for the Thunder are the short term ones.

Oklahoma City has to win a title in the next two years. There is a real possibility Kevin Durant could be gone. And right now, the Thunder are relying on Jackson, Adams and Lamb filling in those roles to support Durant and Westbrook and Ibaka. They have been inconsistent to this point of their young careers.

They have to become championship-level players. The past two years have proven that Kevin Durant and Russell Westbrook can only carry the team so far. Oklahoma City needs something else.

And that championship window is closing fast.