What is a sports dynasty? As the saying goes, “You know it when you see it.”

Some dynasties rise to the very top of a sport’s power structure. Others might remain clearly marked as dynasties, but it’s evident that they can’t claim to exist on the most exalted of planes. They’re near the mountaintop, but not at the absolute summit.

On a day when we have debated whether the 1990s Bulls or the 1960s Celtics represent the greatest NBA dynasty of all time, it’s worth asking, “What about the other dynasties in league history, or the dynasties that never quite came into being?” What events shape the way we view dynastic power in the NBA over time?

Here are five fundamental events that have lent some dimensions and structure to the way we evaluate the NBA’s most powerful organizations since the league came into existence in the 1940s:

The shot clock saved the NBA in its very early days. The move also reduced the magnitude of the Minneapolis Lakers’ achievements. The Lakers were the first NBA dynasty, not the Boston Celtics. Coach John Kundla and big man George Mikan presided over a team that was able to dominate the game near the basket and build leads. The lack of a shot clock played right into the hands of the Minneapolis ballclub. Winning five championships in six years is a tremendous feat, regardless of sport or situation or surroundings. Nevertheless, the lack of a shot clock created a game completely different from what emerged in the 1954-’55 season and beyond. No one would contend that the Minneapolis Lakers’ dynasty deserves to stand on the same plane as the Celtics’ and Bulls’ best decades.

Alex Hannum, coach of the world champion 1967 Philadelphia 76ers, was rightly inducted into the Basketball Hall of Fame as a coach. He won two NBA titles (one with the 1958 St. Louis Hawks) and an ABA title with the Oakland Oaks. That should lead to Hall of Fame inclusion.

Billy Cunningham didn’t exactly do a bad job with the 76er teams of the early 1980s. Three NBA Finals appearances and one title while sharing space with the Kareem-Magic Lakers and the Bird-Parish-McHale Celtics? That’s decent at the very least.

Philadelphia hoops fans — in one of the sport’s great urban meccas — cannot help feeling that their franchise missed out on the chance to create a dynasty… and not once, but twice.

The 1967 club was one of the great teams in the history of professional basketball. Wilt Chamberlain, Hal Greer, Chet Walker, Luke Jackson, Wali Jones, and Billy Cunningham and Larry Costello off the bench. The Sixers had a true powerhouse on their hands… but they couldn’t win more than one title. When a 62-win club came up empty in 1968, Hannum left. So did Wilt. In came a fellow named Jack Ramsay to coach a club that didn’t have a low-post hammer.

Ramsay coached the Sixers from 1968-’69 through 1971-’72. He didn’t have a team with which he could win a title. He moved on to the Buffalo Braves and built a playoff team with that new franchise. Then he moved to Portland and won a championship, and had Bill Walton not gotten hurt in 1978 (heck, had Bill Walton not had a brittle set of knees), Ramsay could have built a dynasty in the Pacific Northwest.

As it was, though, the reality of Ramsay not coaching the Sixers at the right time had to sting Philadelphians. Ramsay was born in Philly. He went to high school and college there. He coached at Saint Joseph’s University and led the Hawks to their only Final Four in 1961.

In one of those moments that makes you think of a Twilight Zone episode, Ramsay’s successor at Saint Joseph’s was Jack McKinney, the same man who joined Ramsay on the Portland Trail Blazers’ staff in 1976 and was later hired to coach the 1979-1980 Los Angeles Lakers. Shortly after that NBA season began, McKinney suffered a near-fatal bicycling accident and ceded the head coaching job in L.A. to Paul Westhead… who coached the Lakers over the Philadelphia 76ers in the 1980 Finals. When McKinney recuperated and Westhead assumed the role of head coach, a vacancy on the Laker staff was created. Westhead filled that vacancy with a man named Pat Riley. If McKinney had not suffered that accident, who knows if he would have been able to out-coach Billy Cunningham in the 1980 Finals? (Westhead, of course, did.) The history of basketball, in Philadelphia and many other places, could have been radically different. 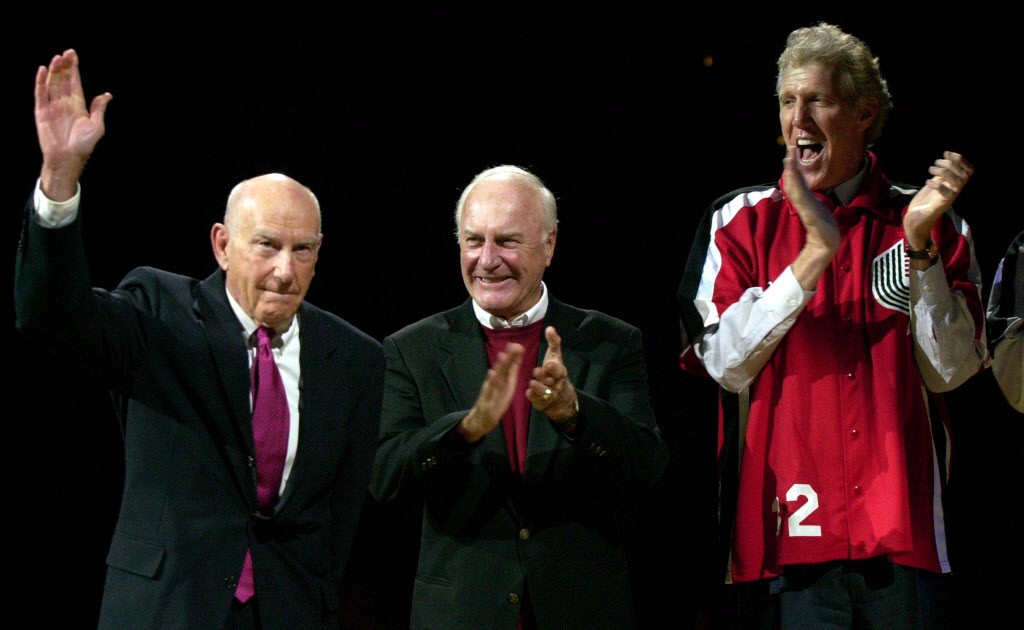 Jack Ramsay and Jack McKinney (standing next to Bill Walton) coached for many years in the city of Philadelphia. Their journeys in coaching magnify how much the 76er franchise missed having Ramsay at the right time… and how improbable it was that Paul Westhead and later Pat Riley would get the chance to coach the Lakers past the Sixers in separate NBA Finals series, in 1980 and 1982. If Ramsay had coached the Sixers in one of their prime periods, and if McKinney hadn’t suffered a serious bike accident early in the 1979-1980 season, how different the history of professional basketball in Philly might have been.

Ramsay — with McKinney at his side, a couple of Saint Joseph’s boys — defeated the Sixers in the 1977 NBA Finals, guiding the underdog Portland Trail Blazers to a 4-2 series triumph. Gene Shue, profiled with some other 1970s coaches earlier this week, coached for roughly two decades in the NBA. He knew a thing or four (or eight) about coaching. Yet, he wasn’t in Ramsay’s league, and the impact of that loss is really what pushed Shue out of Philadelphia early in the 1977-’78 season, with Cunningham — a player on the 1967 world champion Sixers — being brought in to coach Julius Erving and the rest of the team. Cunningham did win a title, so it’s not as though his tenure was a failure, but just imagine if Ramsay had been able to coach Wilt in the late 1960s or The Doctor in the late 1970s through the mid-1980s.

The Sixers — never quite able to build a dynasty — might have been able to rewrite history if Ramsay had been there at the right time.

The 1980s Los Angeles Lakers represent a dynasty, but they can’t be viewed on the same plane as the 1990s Bulls or the 1960s Celtics. What single moment brought that reality into being, more than any other?

If Gerald Henderson didn’t make that steal, the Lakers would have taken a 2-0 series lead back to L.A., and would have almost certainly won the series, very possibly in a sweep. If the Lakers had won the 1984 Finals, they would have had a chance to bury the Celtics and not allow them to recover as the decade unfolded. As it was, though, the Celtics won the 1984 Finals, and the 1980s — while owned mostly by the Lakers — were rented out to the Celtics and Sixers and, at the end, to the Detroit Pistons. The Lakers traded too many punches (and titles) with other teams to be viewed as a top-tier dynasty, on the same level as the Bulls and the 1960s Celtics.

Look away, Knicks fans, but this is the moment that in many ways enabled the 1990s Chicago Bulls to become the dynastic team they were and are and always will be:

In the third years of their two three-peats, the Chicago Bulls won the NBA Finals without homecourt advantage. In 1993, the Bulls won the Eastern Conference Finals without homecourt advantage as well. The victory which enabled them to beat the higher-seeded Knicks was Game 5, and the Charles Smith block party gave Chicago a chance to close out the series at home, avoiding the Game 7 the Knicks used (and needed) to eliminate the Jordan-less Bulls one year later, in 1994.

If Charles Smith finishes that play in 1993, we would still herald the Bulls and Jordan as the best of the best… but the team’s greatness wouldn’t be nearly as unassailable.

1 – JACK KENT COOKE HUNG THOSE BALLOONS FROM THE FORUM RAFTERS

Players play, coaches coach. Yes, athletes and competitors have to perform, regardless of the outside circumstances. The Boston Celtics beat the Los Angeles Lakers fair and square in the 1969 NBA Finals — no excuses, no spin, no nothing.

Yet, one can acknowledge that without a display of unwarranted hubris from then-Los Angeles Laker owner Jack Kent Cooke (who later became majority and then sole owner of the NFL’s Washington Redskins, an ownership position in which he did not get in the way of his teams nearly as much), the Lakers might have been in better position to win Game 7 of that Finals series.

The story is not an unfamiliar or obscure one: It was visible to anyone who went inside The Forum for Game 7, and it has been told to subsequent generations of pro basketball fans, especially those in New England.

The Lakers had been chasing the Boston Celtics for a full decade. They lost to the Celtics in the 1959 NBA Finals when in Minneapolis. They moved to Los Angeles and lost to Boston in 1962… and 1963… and ’65 and ’66… and ’68. Wilt Chamberlain then arrived from the Philadelphia 76ers, and the drought was supposed to end. The Lakers usually had to play deciding games in Boston Garden (if they even got to a Game 7), but this time, a deciding contest was in Los Angeles. Cooke bought the Lakers in 1965, so he had experienced several Finals losses as an owner. He was ready to win in 1969, but he allowed his enthusiasm to cloud his judgment. He put balloons in the rafters of The Forum and attached a note to each seat which began with the following words: “When, not if, the Lakers win the title…”

Laker legend Jerry West was furious when he learned of Cooke’s actions. Celtic player-coach Bill Russell didn’t need motivation, but he was a very old player who was playing in the last game of his career. A little extra energy for him and his veteran players did not hurt. The Lakers, instead of viewing the game as an opportunity, could see those balloons and realize they were under a ton of pressure to win. The Lakers wanted to keep Game 7 as much like a normal basketball game as possible, but the balloons destroyed that dynamic.

This didn’t decide the outcome, but it helped shape it.

When the Celtics — in their position as a pronounced pre-series underdog — defeated the Lakers yet again, the reputations of the two franchises were draatically reaffirmed, more than in any of their previous six Finals meetings. Had the Lakers won that game, so many of the NBA’s foremost “all-time” debates would have taken on decidedly different contours and dimensions.

The Celtics and Lakers are the two most storied franchises the NBA has ever known. How they are regarded and remembered, how they are measured and magnified, can be traced to many events — several from the early 1960s; several more from the 1980s; and some from the battles of 2008 and 2010. Yet, no Celtic-Laker confrontation carried the weight of the 1969 Finals, and of all the things that transpired during that series, the balloons in the rafters of The Forum represented the most unexpected plot twist, an event entirely removed from the control of every player and coach.

“What if Jack Kent Cooke hadn’t been so arrogant?”

It’s one of the great what-if questions in the history of the NBA… and North American professional sports.