It was a forgone conclusion Greg Monroe was going to test free agency last summer. He poo-pooed Detroit’s extension talks and took the qualifying offer in order to hit the market — and flea Detroit — as quickly as possible. New York and L.A. came calling in July, as was expected, but Monroe threw the entire league for a loop when he inked a maximum 3+1 deal with the upstart Milwaukee Bucks.

Basketball fans, particularly those with allegiances to small- or mid-market teams, couldn’t help glowing after the move. Milwaukee is a NBA League Pass darling — a fresh-faced, dynamic roster sculpted in the vision of polarizing head coach and soda spiller Jason Kidd.

Monroe isn’t a perennial All-Star, and his style of play is closer to anachronistic than ground-breaking. However, a player of his ability and age (25) historically never picks Milwaukee on the open market. The current status of the Eastern Conference means it’s plausible the Bucks jump from last place to home court in round one in two seasons.

It’s not fully discernible what Monroe will look like in Milwaukee. For starters, Monroe is now a full-time center for the first time since he was the best player in the Big East Conference. The move is largely a good thing — Monroe was treading water guarding the modern 4 position, and Detroit hemorrhaged points when Monroe and Andre Drummond shared the floor. He’s a superb rebounder — he finished 12th and 13th in offensive and defensive rebound percentage, respectively — and has plus-size and strength.

Monroe has been a putrid rim protector through five seasons. Opponents shot 55.1 percent at the rim on Monroe last season, per NBA.com, and Monroe swatted 34 shots in 69 games. He’s a flat-footed defender — the deft skill his court vision affords him on offense is eviscerated by a lack of foot speed on defense. 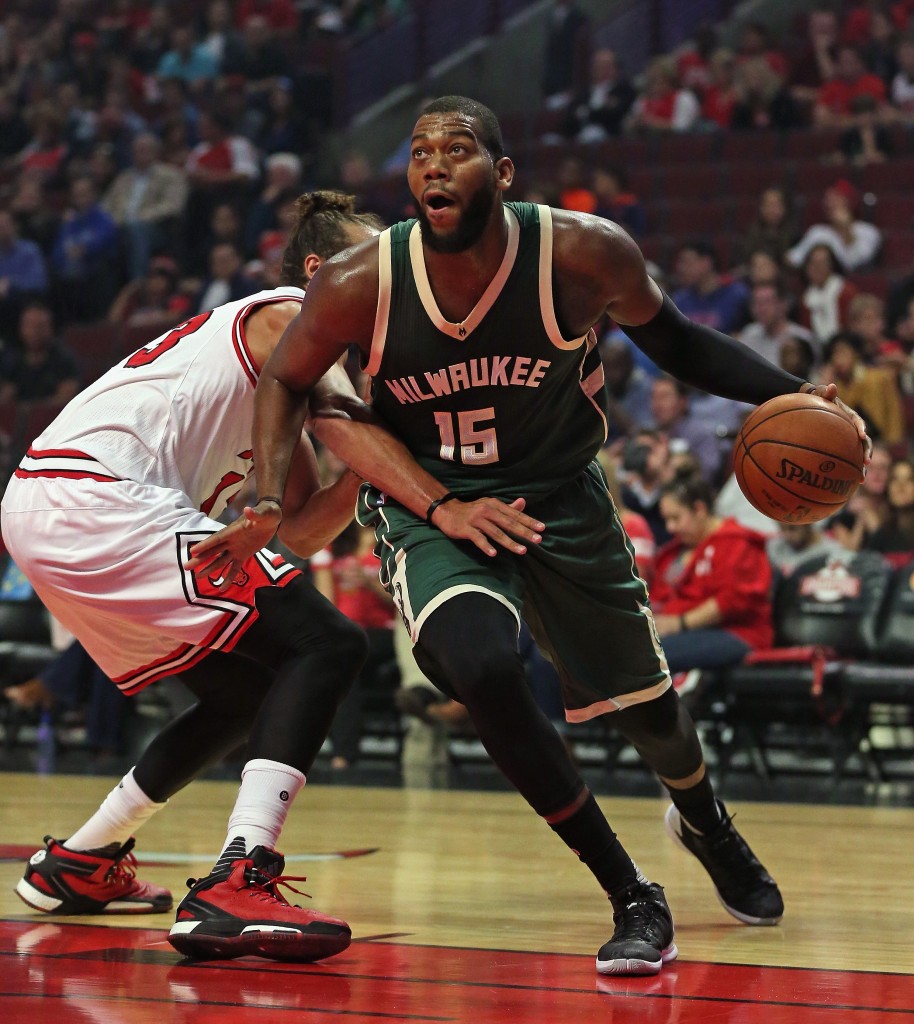 If there was one team that could best assist Monroe’s transition back to center, it’s Milwaukee. John Henson and Giannis Antetokounmpo provide as much rim protection at the forward spots as anyone. Khris Middleton, the newly minted $70 million man, is 6-foot-8 and swiped 1.5 steals per game on the wing. And while Michael Carter-Williams is something like the worst shooter in basketball — the Bucks/76ers/Suns trade continues to boggle the mind eight months later — his 2.0 steals per game exemplified why Kidd wanted him to lead the highest turnover-producing defense in the league.

The Bucks have 10 proven rotation players who are 6-6 are taller. Only Golden State posted a better team DefRtg (99.3) from start to finish last season, and while Monroe will never be peak-Roy Hibbert in the paint, his plus-rebounding and size will do the trick behind a sea of arms.

Where the question marks persist, though, is from distance — as long as the Bucks might physically be, there are few teams in the league with a shorter number of range shooters. Milwaukee was 28th in the NBA after the All-Star break in percentage of points coming from 3s (17.9) — a figure that has everything to do with the acquisition of Carter-Williams and what they dealt in order to get him. The Bucks were playing non-shooters at two out of three backcourt slots (Antetokounmpo’s 3P% plummeted 20 percentage points in year two), and No. 2 overall pick Jabari Parker — an OK shooter up to 20 feet who projects as a mid range artist — missed the majority of the season.

Monroe didn’t attempt a 3 last season, nor should he. Where he could stand to improve is shooting out of the high post, as Milwaukee will look to play through him, sending Carter-Williams, Antetokounmpo and Parker on kamikaze cuts to the tin. Middleton, O.J. Mayo, Chris Copeland and Greivis Vasquez will shuffle in and out of the lineup to spot-up around Monroe, and those looks will be there so long as opponents are forced to levitate around Monroe post actions. The big galoot shot 37.2 percent on mid range attempts last season, ranking 153rd out of 237 players who attempted 70 or more shots, and Monroe was worse on shots in the paint but outside the restricted area (36.6 percent).

An uptick in shooting would provide Monroe a bit more real estate while threading the ball to darting wings and marksmen. Monroe’s passing abilities were wasted on moribund offenses at the end of the Joe Dumars era in Detroit — watch the tape from his Georgetown days and you see a poor man’s Pau Gasol, or perhaps that’s underselling it.

His best attributes would occasionally surface in Detroit. Watch him whip passes and cut up a helpless Kings defense during the 2012-’13 season:

The Bucks aren’t a lost cause offensively — Monroe’s post-up game will do wonders for their movement. The jury is out, however, on whether the Bucks can balance the floor so that they’re playing Top 5 defense AND component offense. Plugging Vasquez into the starting lineup for Carter-Williams when the game matters most makes a lot of sense, but will he and Monroe undo the work Middleton/Giannis/Henson are doing defensively? How Kidd tinkers with his rotation will go a long way to determining if the Bucks are an overmatched road playoff team or something more.