LeBron James went for $64 in my fantasy basketball league’s auction draft Sunday evening, making him a distant fourth in price behind James Harden ($75), Steph Curry ($79) and Anthony Davis ($91). He went for virtually the same price as Russell Westbrook ($61) and Chris Paul ($60), and a controversial bidding war drove the price of Paul George ($60) — coming off a gruesome leg injury and playing for one of the most publicly dysfunctional organizations in the league — within four dollars of LeBron James.

This admittedly circumstantial evidence is a microcosm, I believe, for how many basketball fans feel about LeBron James after 12 seasons and nearly 36,000 regular season minutes (not to mention: international competition and postseason minutes, including five consecutive trips to the NBA Finals). How can he keep this up?

Maybe he can’t. News broke last week that LeBron will miss the remainder of the preseason after receiving an anti-inflammatory injection to ease discomfort in his back.

LeBron James did have an anti-inflammation shot in his back this week out of precaution, sources said. First reported by @JasonLloydABJ

With Cavs having a depleted roster due to injuries, steps being taken to have James prepared for season. Has had these shots in back before

LeBron James famously took two weeks off last season to take pressure off his aching body. He returned and, presto chango, the Cavaliers sped up to another gear — the confluence of James’ health and the bounty of players acquired by GM David Griffin elevated Cleveland to a true title contender.

The 2014-’15 season was the first time in James’ career he played less than 70 games, and the only non-rookie campaign he averaged less than 26 points per game. James had his worst shooting season since he entered his prime, and while his counting stats remained unchanged across the board, his defensive metrics continued to plummet — it’s been several years since James was a top flight defender, game-in, game-out. 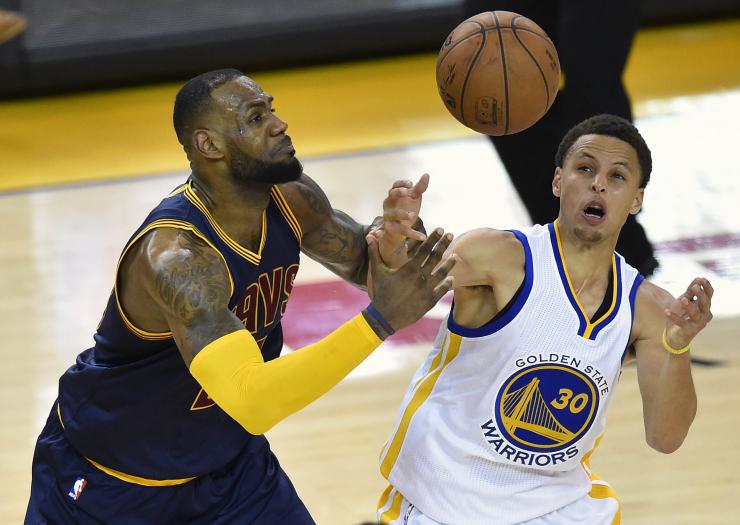 Jeff Van Gundy regularly came to LeBron James’ defense throughout the Steph Curry/James Harden MVP chatter last season, claiming that if another player had LeBron’s numbers, in a vacuum, they’d be discussed as a favorite for the award. This might be true — and all the while, from the regular season through the NBA Finals, the vast majority of writers and fans would preface all discussions of the matter with, “LeBron James is still the best player in the world, but…”

The “but” matters, though. While James is undoubtedly the greatest active player in a historical context (cue the screams from Kobe fans and the general indifference from Tim Duncan fans), there’s no need to frame what Curry and Harden did last season as less significant because LeBron had a down year. As I wrote about today for the site, what Curry does every night to opposing defenses — basically reducing his opponents to dogs chasing cars — is the premiere skill from any one player in the league.

This isn’t subjective, it’s fact supported by pages and pages of data — Curry’s game makes the Warriors the best team in basketball whenever he’s on the floor. To diminish what his game-breaking jumper does to his opponents, or what Harden’s prolific creation skills on the perimeter and on the drive, by prefacing it with, “But LeBron is still better,” is missing the point. Yes, LeBron James is the singular most talented player in the league, and no, James was hardly close to being the best player in the league in 2015-’16.

With the rapid rise of Anthony Davis — who the CC staff also wrote at length about today — perhaps King James will be dethroned by the game’s most evolutionary talent before season’s end.