The Warriors are the best team in the NBA on both ends, scoring 111.7 points per 100 possessions while placing the majority of their opponents in a chokehold. For much of the first half against the Clippers on Thursday, however, their in-state adversary got the better of the Warriors. Chris Paul, a game-time decision with a groin pull, was playing at peak performance — the future Hall of Famer hit his first seven shots of the game, and baited Steph Curry into a pair of bonehead fouls in the game’s first two minutes.

The Clippers were playing without J.J. Redick, but were producing league-high levels of offense (41 points, 17-for- 24 FGA, 83.3 eFG%) with Paul and Blake Griffin pulverizing the Warriors in the pick-and-roll. Griffin led Draymond Green into two quick fouls as well, and Golden State was down by as much as 50-27 in the second quarter with its rotation stymied by foul trouble. Paul abused Mo Speights on multiple switches in Green’s absence, his wide open jumpers doubling as maniacal laughter. The Warriors were forced to play much more conservative defense — instead of their artful switching scheme, Speights and Festus Ezeli played back, and the Clippers made it rain whenever Griffin wasn’t throwing his man through the spin cycle.

Green played 11 minutes in the first half. Outside of Curry, the best basketball player on the planet, there is no more important player to what the Warriors do on both ends. He’s the most versatile defender in the game, a deft playmaker and ideal screen man for Curry on offense. Draymond makes the best team in the league 3.6 points per 100 possessions better, per NBA.com: 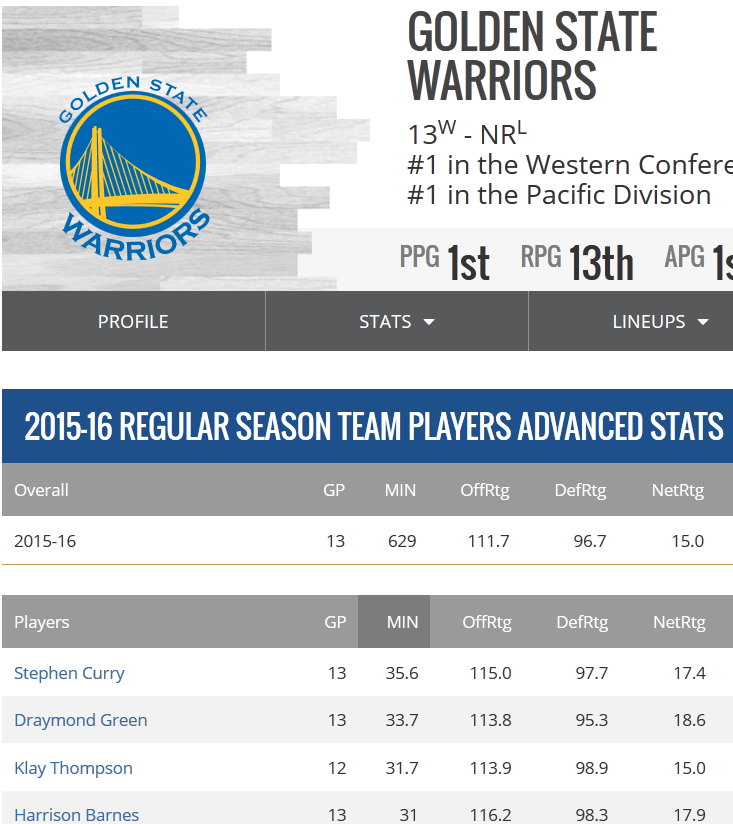 He’s also been a problem for the Clippers. Since becoming a full-time starter for Golden State in 2014-’15, the Warriors have beaten the Clippers five out of six times. With Green on the floor harassing Griffin, boxing out DeAndre Jordan and getting chippy with Paul on every switch, the team’s defensive rating was 96.4 against the Clippers last season, with an 11.2 NetRtg.

The tides began to turn on Thursday in the second quarter as Golden State spread out an aimless, chirpy Los Angeles defense. The Warriors lived at the line (31-for-36 FTA) and crushed the Clippers on the glass, 44-35. Meanwhile, the open shots Los Angeles enjoyed in the opening frame had all but disappeared by the third quarter — the team shot 40 percent from the field and 35.3 from deep in the second half.

Green was everywhere — cutting out Griffin’s eyeballs at the elbow, then guarding two perimeter threats at once while keeping his toes just outside the paint. L.A. badly missed Redick on Thursday, allocating his minutes between Paul Pierce and Jamal Crawford — the later of which Green bullied whenever possible:

DeAndre Jordan came out of Thursday’s collapse with a +8, evidence that plus/minus is not a full-proof exercise. He was a constant wanderer on defense, losing track of cutters and the rim throughout the second half. Green killed Jordan on a critical in-bounds play in the closing minutes:

Plays like this happen, but it was inexcusable how badly Green outworked Jordan and Griffin on the glass. Curry and Harrison Barnes combined for 18 rebounds, so while Green only finished with six, you better believe it was his tush plowing into L.A.’s bigs that gave his team the edge. Watch as Green keeps Jordan off the glass, then recovers after Griffin steals the offensive rebound to block the ball off Griffin’s head and out of bounds. Genius defense:

And this was patented Green: he plays above his taller counterparts on the block, secures the offensive board, kicks the ball to Curry, and works in a “legal” hip check on Curry’s man to free up the baby-faced assassin:

Beyond his defense and timely shooting…

Draymond Green with the 3 to beat the buzzer and end the 3rd quarter! #warriors #DubNation https://t.co/gI2yU6Euws

… Green changed the complexion of the game with his unrivaled passing abilities from the power forward position. Complimenting his 12 points, seven rebounds and 1.4 steals and blocks per game this season is Green’s 7.1 assists. Draymond is the best passing big man in the NBA by most measures:

In many ways, it’s unfair to call Green a big man in the same way Griffin is. Green’s skillset has always been poor man’s Magic Johnson meets Zach Randolph — yes, both Spartans — and as Justin Rowan of Fear The Sword and Hoops Lounge pointed out, the basketball situation Green landed in is a dream scenario:

@thatjoemags dude he's been one of the 10 best players in the league this year. He's taken such a step forward offensively.

@WoodleySean @thatjoemags to me a top ten guy is someone that's amazing regardless of situation. Not sure green is THIS good on Sacramento

Griffin can boast a superior turnover ratio (6.4) than Green’s (12.5), and Griffin’s responsibilities are certainly more extensive in term’s of offensive creation. Green doesn’t have to be labeled a Top 10 player, or “the best passing big man,” or Defensive Player of the Year, however, for the league to reckon with the fact that Green is the ingredient which unlocked the best team in basketball.

What Golden State does starts with Curry, the greatest shooter in league history, but it’s Green’s ability to check every position on one end and then facilitate the offense when Curry is double-teamed across the 8-second line that makes the Warriors, “the Warriors.”

Green had a game-high nine assists sharing the floor with Curry and Paul. Those dimes went along with his 7-for-9 shooting from the field, and perfect 3-for-3 shooting from deep. He doesn’t shoot lights out every night, but he’s getting good enough from range — and this goes for Andre Iguodala and Harrison Barnes, as well — where opposing defenses justifiably have no idea what to do.

@WoodleySean @Cavsanada When Iggy/Barnes are knocking down corner 3s with regularity, Draymond with room to operate at nail is insanity.

That was Los Angeles last night during the second half of a game it should have won. There are a million angles to ponder about Thursday nights mega-regular season, “Holy crap, it’s only November and games shouldn’t be this awesome,” matchup. For me, the one I keep coming back to is this: if Stephen Curry and Draymond Green are on the floor, I pick them. I pick them every time.

Bottom line: Curry/Draymond Green on the floor = immoveable object for opponents. Outscoring opponents by 19.1 points per 100 w/ those two.