Preseason predictions are tricky. We basketball prognosticators pride ourselves in crunching the numbers, on reviewing months of months of games, and faithfully keeping up with a near-12 month sport with a financial landscape that’s transforming like the platforms in Super Smash Bros Melee. All the while, we’re praying we haven’t unconsciously subscribed to someone else’s confirmation bias — I’m reading other’s analysis as much as I’m writing down my own.

I was bullish on Detroit heading into the season — not necessarily as a playoff team, but as an organization finally facing the right direction. Stan Van Gundy has the unenviable burden of running and coaching the team, but if anybody could handle it, Van Gundy is the man. He’s a particular fellow — he’s been around the game long enough to know what he wants; Van Gundy knows how to shop for his own groceries.

Van Gundy spent the summer reconfiguring the roster, predating the draft by acquiring Ersan Ilyasova, and consciously letting Greg Monroe walk in free agency. Detroit got better this summer, to be sure, but how much better left analysts uneasy about catapulting the East’s driest well into the Top 8. The Pistons opened their schedule against the Hawks and Jazz, the former a 60-win contender a season ago, and the latter the NBA’s best second-half defense and the consensus pick to steal the No. 8 seed from a droopy Dallas team.

How Detroit fared against Atlanta and Utah tells us very little about how the team will do over the final 80 games of the season…. Right. Got it. But let’s tip over some boulders and see what’s crawling around after a pair of wins against two formidable opponents. 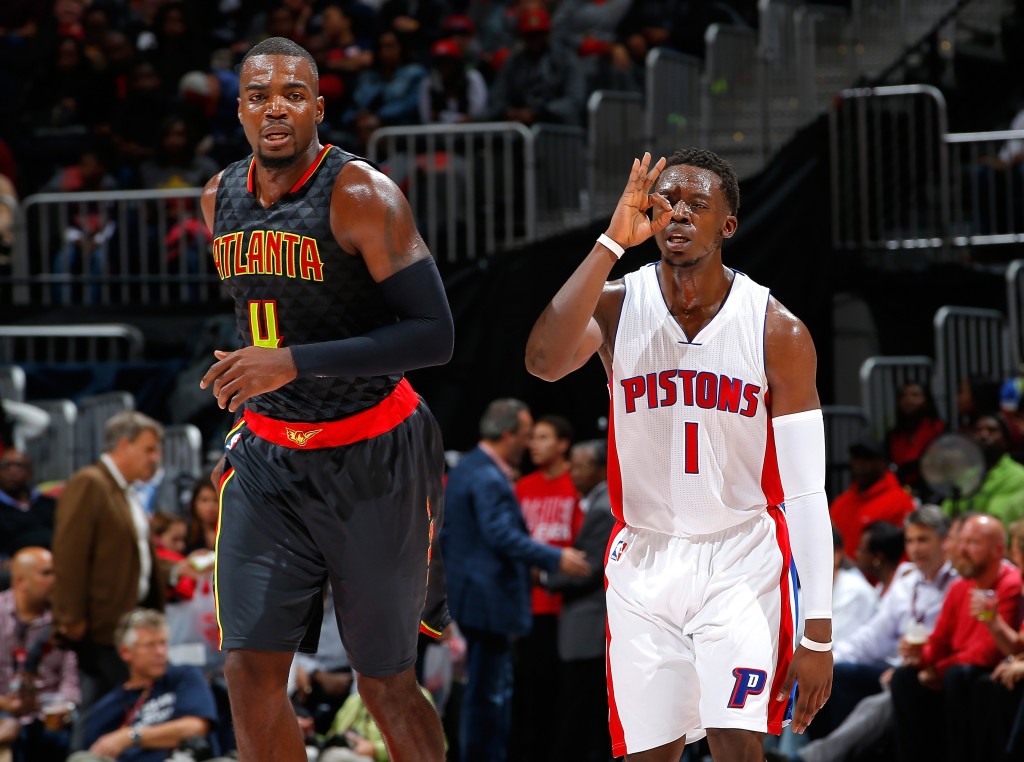 Detroit buried a dozen 3s against Atlanta, ripping the net on 41.4 percent shooting. The Pistons were the 8th most reliant team on 3-pointers last season, but they were a below-average shooting team from deep — Van Gundy’s preferred style of play preceded its pudgy roster. Surrounding Andre Drummond with shooters has opened up the floor for Detroit, and created drive-and-kick possibilities that simply didn’t exist before.

Of course, the Hawks are a prolific shooting team too, but they hit eight 3s on 27 attempts against the Pistons. Van Gundy had his team hold true to their assignments — he was willing to let Drummond, Ersan Ilyasova, Marcus Morris and the rest of his forwards take one-on-one beatings so long as Detroit ran shooters off the line.

The plan worked two-fold: Atlanta shot under 30 percent from deep, and because Detroit brutalized Atlanta on the glass (59-40), it dominated FGA (96-82) and FTA (26-15). The Hawks are a decent matchup for the Pistons because of their ineptitude on the boards and their dearth of perimeter defense without DeMarre Carroll. 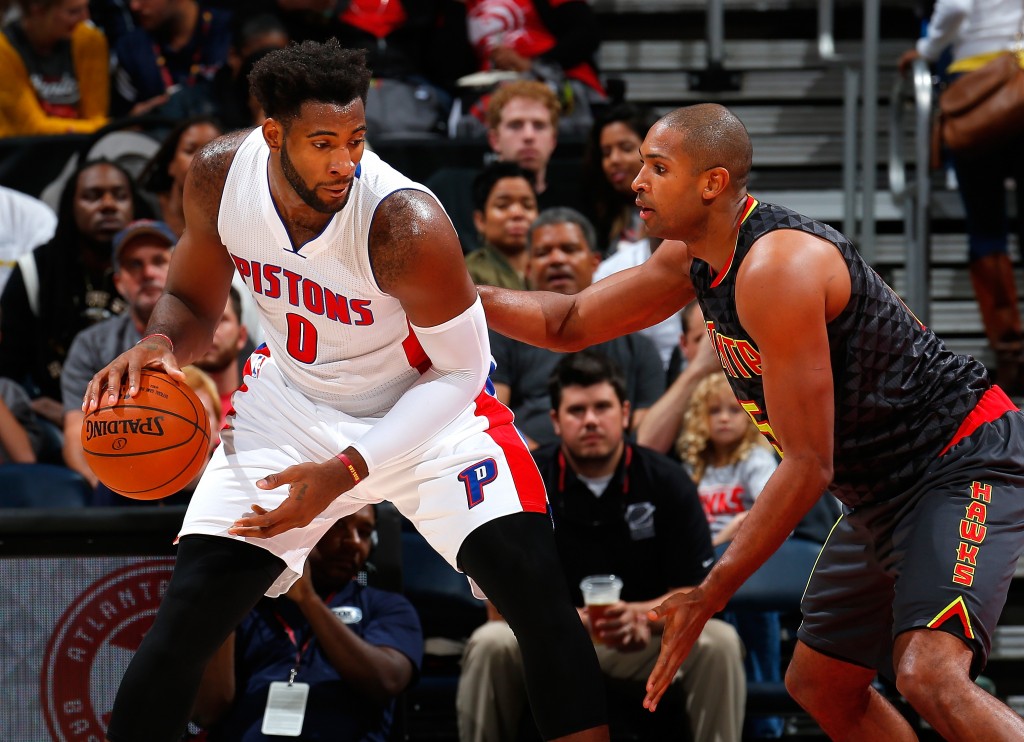 Drummond is a budding All-Star in the weaker conference. He’s led the NBA in offensive rebounding each of the past two seasons despite splitting frontcourt minutes with Josh Smith and Greg Monroe. In their absence, Van Gundy believes Drummond will spread his wings.

It’s important to distinguish, though, what Drummond is right now from what he might someday be. His monstrous size and athleticism could one day yield an All-NBA defender — he’s not there yet. Drummond gets caught in no-man’s land all the time on defense. This happened frequently against Atlanta’s high-IQ centers Al Horford and Tiago Splitter, who are unabashed movers and shakers in the pick-and-roll.

Horford, at least, is one of the game’s great mid-range scorers. He’ll peel off the pick and park at the nail, daring his man to hold his ground while he lines up an 18-footer. Drummond’s confusion on Tuesday manifested itself in camping halfway between Horford’s jumpers and the rim, leaving plenty of room for Jeff Teague or Dennis Schroder to skirt into the paint — where they could finish their drive or draw Drummond and dish to a lonely Horford at the stripe.

Against Splitter, and again on Wednesday with Rudy Golbert, Drummond was routinely suckered into Molasses Swamp whenever his man would float above the paint.

Utah held a 40-24 points in the paint advantage with 2:44 remaining in the third quarter. The gap closed marginally over the final 15 minutes, 50-38, and Detroit won, 92-87. Van Gundy is correctly committing to small ball around his franchise big man, but playing minuses like Ersan Ilyasova at the 4, or employing Aron Baynes to play 12-15 minutes of center, is a death trap for the team’s interior defense. The remedy is for Drummond to sure up the holes in his game, and mature into a legitimate rim protector, but that takes time.

Drummond is undeniably one of the game’s most talented rebounders, and his 10 boards lifted the Pistons above a terrific Jazz team on the glass, 43-38. The 22-year-old has developed bad habits, however, most notably tipping the ball into the sky — an arrogant move really large humans do on the basketball court when they think only they can procure the ball at a particular elevation. (My best friend is 6-foot-8, and I’ve beat him once since we were in middle school. I’m jaded.)

In the NBA, however, the “tip drill” doesn’t always work — using your ass to clear out space is a more foolproof plan.

Drummond has begun the season 11 for 27 (40.7 percent) from the field — a byproduct of his competition, Horford and Rudy Golbert, and their defensive prowess. Horford forced Drummond to miss at least his first three shots because Drummond simply couldn’t get the ball deep enough. Horford would force him to catch the ball outside the restricted area, and the Tim Wakefield-knuckleballs would soon follow.

The best Drummond possessions involve simple plays: hot rolls with Reggie Jackson or Steve Blake that end in dunks, or dump down passes after Drummond patrols the baseline and finds a crease into the lane. Working out the kinks of his sophomoric post-up game is critical to the long-term plans for the organization, but in the meantime, his prettiest possessions are when he lets his physicality create opportunity.

He’s stroked 14 of his first 21 foul shots this season (66.7 percent), up from 38 percent a season ago. He made four free throws in a row during the third quarter against Utah during a crucial juncture of the game. If Drummond ups his physicality and keeps himself on the floor by evading foul trouble and foul-shooting woes, his first All-Star game will be February 2016. 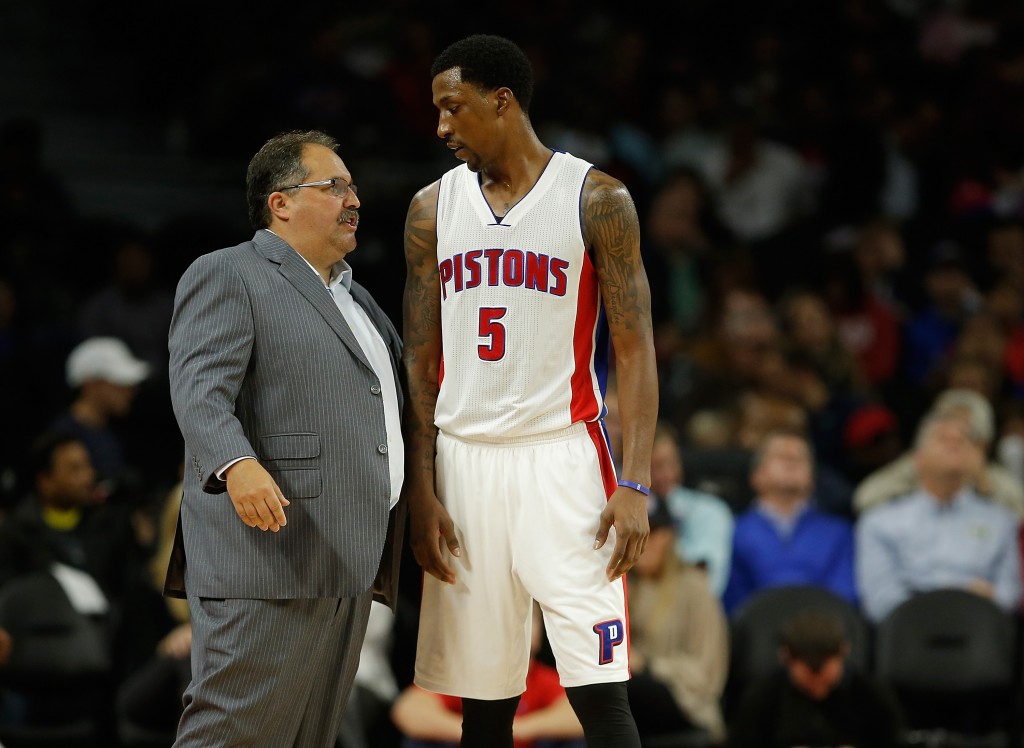 The Pistons are so much more aesthetically pleasing. The extra spacing on the floor, made possible by having 2-3 real shooting threats around Drummond at all times, has created passing possibilities that didn’t exist last season. Look, here’s Reggie Jackson doing a John Wall impersonation:

Kentavious Caldwell-Pope missed that jumper, but he hasn’t missed much else. The third-year 2-guard has stepped up in a big way, stroking 3-6 3PA, shooting 48 percent from the field and averaging 18.5 points per game. He’s looked great cutting to the basket with a blur first step. Watch him dart by Gobert…

… or on this one, where he creates an easy Drummond dunk by slicing into the paint:

Drummond has even gotten into the act. Watch him find the open man on this spread post entry:

There’s other exciting pieces offensively. Marcus Morris has embraced his starting role, away from the loving arms of his brother in Phoenix, and then some. He displayed soft touch with his back to the basket as he doused smaller wings Kent Bazemore (Atlanta) and Rodney Hood (Utah) in gasoline on fadeaways and pull throughs.

Van Gundy opted to start Morris and Ilyasova at the two forward spots, and Ilyasova has provided a prototypical stretch-4 game. He’s nailed five of 10 3s on mostly wide open attempts. The Pistons will overload the strong side with Morris in the short corner and Ilyasova on the wing, allowing the high pick-and-roll to instigate 3-on-2s and 2-on-1s as the defense scampers around.

Trouble is Ilyasova is horrendous on defense, particularly against larger power forward types whose eyes get real big whenever they see the Turkish tweener alone in the paint. Paul Millsap had a field day against Ilyasova — he started 3-3 on him and his fourth post-up earned him a trip to the line. Sometimes the +/- stats don’t line up with the eye test — Millsap closed as a minus-22 on Tuesday, most likely because of all the 3-pointers Atlanta’s starting lineup coughed up. But Millsap (19 points) and Derrick Favors (26 points on 10-15 FGA) roasted Ilyasova, and that’s a problem that won’t go away anytime soon while he’s in the starting lineup.

Schroder and Splitter diced up Aron Baynes and Steve Blake and fed them to the sharks throughout the game. This beauty was part of a 14-0 run by Atlanta between the first and second quarters that coincidentally coincided with Baynes entering the game for Drummond.

There’s more things to like about the first two games then to dislike, and Detroit did win both games, after all. Stanley Johnson is awesome. He’ll fill the lane as a weakside defender without losing track of his man in the far corner. He literally pushed Anthony Tolliver toward the short corner on a fastbreak so that he could fill the wing lane — Johnson swung the ball to Caldwell-Pope who cut to the basket and found Drummond.

Johnson might be the most technically sound rebounder on the team. Watch his offensive awareness on this extended play — he drives, correctly rotates around the perimeter and skies into the lane for a tough offensive board.

Steve Blake had seven assists spearheading the second unit against Utah. Anthony Tolliver energized Baynes and provided excellent veteran court awareness on both ends of the floor. Reggie Jackson hit the virtual game-winner against Utah by driving at Gobert and daring him to make a misstep, which he did — Gobert clung to Drummond and let Jackson sneak to the tin.

Van Gundy has a skilled, charming team with as good a chance as any to secure the always-for-sale No. 8 seed in the East. This isn’t “the year” for Detroit — win or lose, come April, Detroit will be far better off than they were the previous year. Where Drummond, Jackson and all of these shooters take the club in 2015-’16, though, is one of the more fascinating narratives taking place on League Pass each night.