You could have defended Charlotte Hornets general manager Rich Cho’s decisison to trade Noah Vonleh and Gerald Henderson for Nic Batum before the 2015 Draft. The move was widely panned, but you could at least understand Cho’s thinking: in Batum, he was getting a well-rounded swing man who, paired with Michael Kidd-Gilchrist, could have formed one of the top wing duos in the Eastern Conference.

Maybe Batum could have helped Charlotte keep its playoff drought brief, and alleviate the sting of trading away a talented lottery pick like Vonleh. Obviously, things haven’t worked exactly according to plan on that front. Kidd-Gilchrist is likely lost for the season, and Batum – a pending free agent – has seen his offensive struggles carry over from last season, shooting just 36.5 percent from the field during a 2-4 Hornets start. The trade hasn’t worked, but for a team desperately trying to win, there was at least some logic behind it – and it could still have some fruit to bear.

That can’t be said however, for Cho and owner Michael Jordan’s highly publicized draft night gaffe. As was reported in the weeks following the draft, the Hornets passed on trading their 9th-overall pick to the Celtics in exchange for a bounty of draft picks which included four first-rounders. The move would have allowed Boston to snag Justise Winslow before the Heat eventually nabbed him at pick ten. Grantland’s Zach Lowe detailed the offer in his July 28 column:

In the days before the draft, Charlotte peddled that no. 9 pick and Vonleh to some of the teams ahead of it — an attempt to vault into star range. The Hornets found no takers before ultimately giving up and sending Vonleh to Portland for Nicolas Batum the day before the draft. As the drama unfolded the next night, Boston put Charlotte on the other end of a quantity-for-quality pitch. The Celtics offered four first-round picks for the chance to move up from no. 16 to no. 9: that 16th pick, no. 15 (acquired in a prearranged contingency deal with the Hawks), one unprotected future Brooklyn pick, and a future first-rounder from either the Grizzlies or Timberwolves, per sources familiar with the talks.

Instead of jumping at that grandfather offer, the Hornets went ahead and selected Frank Kaminsky, adding him to a crowded frontcourt that already featured Al Jefferson, Cody Zeller, Marvin Williams and Spencer Hawes; Tyler Hansbrough was thrown into the mix in free agency as well.

We’re 5 months removed from the draft, and Charlotte’s decision to take Kaminsky instead of that bucket of juicy picks still doesn’t make a lick of sense. Kaminsky might end up being a good player, but that’s besides the point. While the 15th and 16th overall picks in this year’s draft may not have been sexy, and the picks owed to Boston by the Wolves (2016 – Top-12 protected, becomes 2017 second rounder if not conveyed) and Grizzlies (2018 – Top-12 protected, not unprotected until 2021) have some value-dampening protections, the prospect of adding an unprotected Brooklyn pick should have made the deal a no-brainer for the Hornets’ front office to approve.

Landing an unprotected first-rounder from any team is rare nowadays. Fetching one from a team as talent-bereft and lacking avenues to improve as the Nets is a coup. Yet, the Hornets passed up that opportunity. It was an incredibly shortsighted choice the franchise will come to regret as soon as next season, depending on which Brooklyn first-rounder (2016 or 2018) Boston tried to serve up.

It’s completely justified to laugh at the Hornets for not accepting the Celtics’ bounty. With the Nets looking like the worst team in the NBA through six games, it’s entirely possible that Charlotte will have passed up a first-overall pick in exchange for Kaminsky. 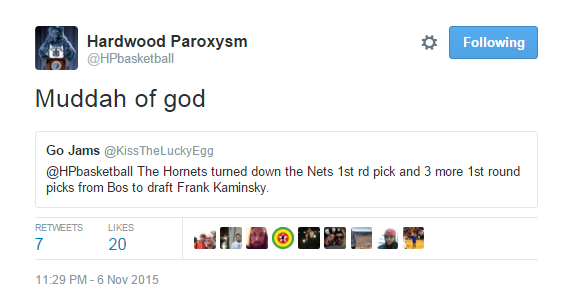 But let’s not let Boston’s GM Danny Ainge get off without criticism here.

As foolish as it was for the Hornets to balk at Boston’s nuclear winter stockpile of draft futures, it was equally outlandish for Ainge to offer so much to move up seven slots to draft Justise Winslow.

Now let’s preface this: Winslow could be great. He hasn’t yet carried over his strong three-point shooting in college to the pros, but every other aspect of his game is tantalizing. He’s got all the defensive potential in the world, and has the athleticism to evolve into an excellent slasher. Still – Ainge was out of his mind offering so much in order to select him.

If Boston had occupied a different place in its rebuilding process, mortgaging so much draft capital might make more sense if the Celtics’ front office truly saw Winslow as the final piece of the puzzle. As constructed right now, though, Ainge barely has the edges assembled. With a collection of big men with varying skills but glaring flaws and a back court of excellent defenders with questionable offensive potential, Boston wasn’t a Winslow away from contention on draft night. Other than Marcus Smart, it’s unclear if any current Celtic will be a part of the next great team at the TD Garden. Shipping out four first rounders — including perhaps the most valuable one in the cupboard — in order to establish a Winslow-Smart nucleus would have been like going all in on a pair of nines.

Of course Ainge has compiled a much deeper collection of future first round picks than the mere four he offered to the Hornets on draft night. It’s not as if Charlotte would have robbed Boston of it’s future the same way the Celtics did to the Nets in the Kevin Garnett/Paul Pierce trade. Here’s a look at the top selections Boston had in its possession as of draft night 2015.

However, if we consider what the Celtics most likely would have parted with, the collection begins to dwindle in both quality and quantity. It hasn’t been reported, but it seems safe to assume that the pick Boston used to take R.J. Hunter likely would have been involved in the proposed move Lowe reported that had the Celtics grabbing pick No. 15 from Atlanta. The Terry Rozier pick also would have gone to Charlotte.

On top of those selections, let’s assume the 2016 unprotected Brooklyn pick would have gone to the Hornets along with Memphis’ protected pick in 2018 (that pick, while further down the line, is clearly more valuable than the Minnesota pick the Hornets were said to have the choice between). Suddenly, the list of future first-rounders looks a bit slimmer:

That’s certainly still an enviable package, but it lacks arguably the most valuable pick in the bunch — the Nets’ pick in 2016 (again, we don’t know for sure if that was the pick offered) —  that could end up fetching a player of the caliber of a Ben Simmons, Dragan Bender or Skal Labissiere. Winslow could be very good, but landing him instead of one of those top-of-the-board prospects seems like an uneven trade-off.

Don’t scoff at the Memphis pick either. We’ve already seen early this season that Memphis’ window of contention may be closing. With the Grizzlies’ core members either approaching or already past 30, it’s entirely reasonable to suggest their picks later in the decade could carry some weight.

This is all to say that while Boston would still have had a boatload of first rounders at its disposal had the trade with Charlotte gone down, the quality of the stash would have taken a hit.

Ainge needs quality picks (plural) right now. His team, despite surprising and making the playoffs last year, is nowhere near complete. Boston is a team with 12 or 13 solid role players which lacks anything resembling a dominant star. As it stands, three straight years with the Nets’ picks represent Ainge’s most likely avenue to land someone transcendent. Brooklyn is going to be bad for a long time barring an unlikely franchise-turning free agency success. Dealing away one third of those prized selections for Winslow would have hampered Ainge’s ability to draft — or trade for — the kinds of top-tier talents that would launch Boston into the Eastern Conference’s stratosphere.

This has all probably been a useless exercise. A draft night deal between the Celtics and Hornets never came to pass, and Boston remains set up for the future better than any team in the NBA. But with the Nets likely embarking on a catastrophically bad season, much will be made of how lucky Boston is to have its draft picks in the bag until 2018, and how misguided it was for Charlotte to turn down one of those selections.

Yet, while we’re chiding Charlotte throughout the year as Brooklyn’s pick becomes ever more entrenched near the top of the lottery, let’s not forget how willing Danny Ainge might have been to trade it away to move up just seven spots in the 2015 draft.