The Utah Jazz can defend.

Since trading Enes Kanter and inserting Rudy Gobert into the starting five at the deadline last season, Quin Snyder’s team has undergone a startling transformation. Utah was by the far the best defensive team in the final two months of the 2014-15 campaign, posting a 94.8 Defensive Rating that was three points per-100 possessions better than the second-best Spurs.

It’s no surprise really. Gobert and his front court partner Derrick Favors are two of the most disruptive rim protectors in the NBA. Around those two behemoths, is a collection of long, defensively sound wings that leave few chinks in the Jazz’ armor. Through 13 games this season, Utah is proving last season’s strong finish was no aberration. Snyder’s squad ranks 7th in the league with a 99.1 Defensive Rating. With their ball-stopping ability, the Jazz are right where most people expected them to be – in the mix for one of the final playoff spots in the West.

But for the ceiling of this team to truly be blown off, Utah’s offense needs some revamping. As competent as the Jazz have been preventing opponents from scoring, they’ve been equally inept generating points of their own. In the early going, the team has the eighth-worst offense in the NBA on a per-possession basis and ranks in the bottom-10 in Assist Ratio (29th), Effective Field-Goal Percentage (22nd), True Shooting Percentage (22nd), Three-Point Percentage (21st), three-pointers made (27th) and three-pointers attempted per game (27th). A team that plays at the league’s second-slowest pace needs to score efficiently in order to not get left behind, and they just aren’t doing that so far. It’s been a slog.

Again though, it’s not an entirely unexpected development. Utah’s front office has done a masterful job building a talent-rich the roster through a mix of intelligent trades and spot-on drafting – particularly late in the first round. But while the front court of the future is set and Gordon Hayward looks to be a perennial borderline All-Star, the Jazz still lack someone capable of initiating the offensive flow. Dante Exum might not have been ready for the challenge in his second season, but his season ending before it started certainly didn’t help matters.

Rookie Raul Neto has fit in on the defensive end; in ESPN’s first Real Plus Minus rankings of the year Neto graded out as the second-best defensive point guard in the league behind Toronto’s Kyle Lowry.With the ball in his hands though, Neto has had issues. He’s racking up assists at roughly half the rate the league’s top point guards are. His 21.0 assist percentage matches that of C.J. Watson. This Jazz team needs more than that. And it’s not like Neto offsets his lack of passing creativity with a knack for scoring on his own. His shot chart is … suspect: 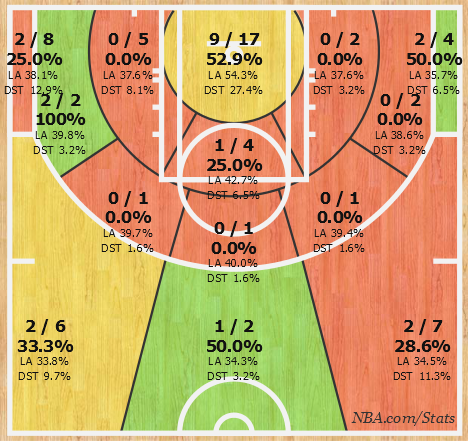 On top of his inaccuracy, Neto has been a dud trying to create as a pick-and-roll ball handler. According to NBA.com’s Synergy data, Neto has scored just 0.45 points per possession in 20 attempts in those situations. Playing off the ball has been equally ugly as the Brazilian is sporting a 27.3 shooting percentage in 1.7 catch-and-shoot scenarios per game. He’s a rookie, and his first 13 games by no means doom his career, but he’s not ready to run a playoff-worthy offense:

And it’s not like Neto is being asked to play 30 minutes a game. Snyder seems to understand what Neto’s limitations are. He’s averaging less than 18 minutes despite starting every game and is ceding fourth quarter minutes to Trey Burke. Therein lies another problem.

Let’s preface this: Burke has been better this year than he was in the first two seasons out of Michigan. It’s a relatively small sample, but he’s been a lights out three point shooter off the bench so far, hitting 44.4 percent of his looks, boosting his PER to an above-average level according to Basketball Reference. That said, his assist percentage has suffered a precipitous drop-off in his new gunning role, and he’s continuing to prove he’s not the answer to Utah’s dire need for a play maker. In addition to that, his presence has hindered his team’s ability to live up to it’s sterling defensive reputation. When Burke is on the court, the Jazz’ defense is ten points per 100 possessions worse off than he’s sitting down.

One line-up featuring Burke is particularly damning. He has replaced Neto in the starting five (with Rodney Hood, Hayward, Favors and Gobert) for a total of 33 minutes. In that time, the Jazz have an excellent 110.2 offensive rating but have still managed to be outscored by 15.4 points per 100 possessions. Burke is an extreme minus as a defender.

Because the point guard spot is such a black hole, Hayward has often been asked to be the true catalyst of Utah’s offense, a development that presents its own set of concerns.

Hayward is hyper-talented, and is passable as an offensive initiator – he’s currently scoring in the 69th percentile among pick-and-roll ball handlers. But his 1.31 Assist-Turnover Ratio leaves something to be desired, and his immense creating responsibilities limit his effectiveness as an off-ball threat.

Where Hayward excels is as a slasher, and while he routinely can find space to attack in isolation, his bread is really buttered when his teammates find him as he runs around a screen, or when he’s already in stride and starting a cut to the basket:

Another element of Hayward’s off-ball game is his catch-and-shoot proficiency. He’s struggled in limited chances this year, but he knocked down 42.2 percent of his catch-and-shoot threes last season. The rest of his perimeter-oriented teammates lack Hayward’s off-ball instincts and general skill set. Rodney Hood, for example, is a promising player, but at this point in time is a putrid three-point shooter who you’re not exactly anxious to set up spot-up looks for.

Hayward works best when he has people to set him up, but on this Jazz team, those guys just don’t exist. As a result, this team goes into offensive lulls like the five minute and 12 second stretch of last Wednesday’s game against Dallas where the team was held without a field goal. Check out this ingenious, not-at-all stagnant sequence of movement and passing from that dry spell:

So what do the Jazz do?

In the short term, the right move might just be to hang tight and try to sneak into the playoffs solely on the back of its menacing defense. Utah probably isn’t destined for late-May basketball just yet, and the core is young enough that it can afford to be a solid-not-great team this season.

If there is no immediate antidote available via trade, we may see Snyder ride the one five-man configuration that seems to work on both ends of the floor more and more as the season progresses. The combination of Hayward, Hood, Gobert, Favors and Alec Burks is, first of all, outrageously big – Burks, at 6’6 is the smallest player of the bunch. The Burks-Hood back court duo is a tricky match-up for smaller guards to overcome based on sheer geometry.

Offensively, the unit thrives because of Burks. He’s the second best offensive wing on the team, and he frees Hayward up to handle the ball without killing the team’s movement. On the play below, Burks’ cross-court movement clears the way for Hood to cut to the rim for an easy basket after a Hayward-Gobert pick-and-roll starts the possession:

Snyder is right to use this quintet in the closing minutes of tight games. In 44 minutes together (the second most minutes for any Jazz unit), Utah’s best lineup has amassed a 128.4 Offensive Rating and a gaudy +25.6 NET Rating. Of course, it can only be deployed in spurts. And using it before crunch time throws the balance of the Jazz’ bench all out of whack. Snyder doesn’t have the necessary personnel to have both Neto and Burke come in as reserves.

In the long run, general manager Dennis Lindsey will probably have to look to upgrade the point guard position somehow. Even if Exum returns at full health next season, it’s far from assured that he’ll be ready to take on the lead role. Utah projects to be under the new salary cap floor in the summer, and will have an exorbitant amount of cash to toy with in the summer that could be used to overpay a point guard to come in and settle the offense.

But regardless of what may be done in the future, there seems to be little hope for the Jazz offense climbing the league ranks with its current collection of talent. Thanks to it’s monstrous defense, though, a top-tier offense shouldn’t keep Utah from being involved in the playoff conversation come spring time.