There’s a palpable nostalgia seeing LeBron James on the floor alongside Dwyane Wade and Chris Bosh. Mike Breen and Hubie Brown, calling the game for ESPN, certainly noticed it on Friday night: the announcers were perplexed by LeBron and Dwyane, great friends and companions on four straight Finals teams this decade, performing a tried-and-true handshake moments before tip-off.

“You don’t see that every game,” Brown muttered dismissively to Breen.

No, you don’t. Then again, James, Wade and Bosh have been anomalies from the moment they agreed to forge the most notorious player alliance in the modern era of professional sports. They are basketball royalty — “The Heatles,” when spotted together, will always look and feel different than everybody else.

It’s important, however, that we don’t confuse the encompassing mystique of Wade and Bosh — as perennial All Stars with multiple championships — for an elevated threat in the always plushy Eastern Conference.

Wade and Bosh signed up for myriad things when agreeing to play with LeBron James, and perhaps the most damning circumstance against them has been placing themselves underneath a microscope for the world to pick apart. The rapid decline of Wade’s physical health was simultaneously named culprit for the splattering at the hands of the Spurs as well as James’ choice to return to Cleveland one month later. No male professional athlete has been so hideously emasculated as Bosh was from “The Decision” through his blood clot diagnosis last spring.

Miami has addressed several key areas of weakness, and a clean bill of health has hoop heads from South Beach to Culver City anticipating a strong run by Erik Spoelstra’s reloaded Heat. Bosh and Wade share a starting lineup with All-NBA guard Goran Dragic, battled-tested veteran Luol Deng and walking double-double Hassan Whiteside. Justise Winslow fell into their laps at No. 10 in June’s draft. Josh McRoberts is back after a season away from the floor. Gerald Green and Amare Stoudemire are on board with coming off the bench and lifting last season’s anemic second unit.

The NBA has been praying for a worthy adversary to arrive in the East and slow LeBron’s roll toward another Finals appearance; Oh, the irony, if the best rivalry in the conference was LeBron’s Cavaliers against the brazen rebuilding efforts of Pat Riley.

Only here’s the thing: Miami isn’t a great team. The Heat are very talented, and lesser foes will struggle to keep Wade and Dragic out of the lane while checking Bosh from above the break and elbows, and also maintaining balance against the hefty two-way play of Whiteside.

Being a great team means more than beating an opponent when everything is working, though. Competing for championships has as much to do with making the correct adjustments after getting socked in the mouth as it is does natural ability. 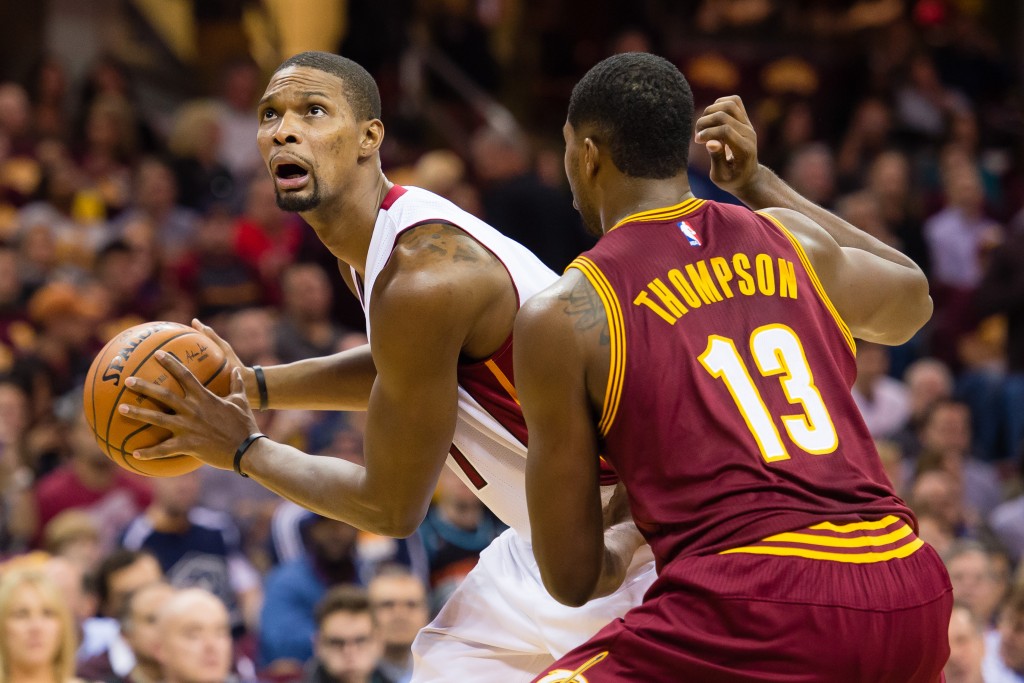 Cleveland had a 2-1 advantage in the NBA Finals against Golden State without Kevin Love or Kyrie Irving. On the fly, the Cavaliers concocted a league-high defense around the frantic zaniness of Matthew Dellavedova and muscular minutia of Tristan Thompson. The Warriors scraped the gum from its shoe in Games 4-6 by playing faster and steadier than the Cavaliers were equipped to go, but LeBron’s team left their blood, sweat and tears on the hardwood. It would shock noone if they returned to the Finals in June.

Irving is still recovering from his knee injury, and he and backcourt mate Iman Shumpert (broken wrist) will likely both miss the first two months of the season. This leaves longtime LeBron-ally Mo Williams and J.R. Smith as the Cleveland starting backcourt, with Dellavedova, Richard Jefferson and little else to hold down the guard spots in the meantime.

As it turns out, though, having LeBron James can be a very powerful tool for any team. On Friday, he and Love used their extraordinary passing skills to lift Cleveland ahead of Miami, 102-92 — and it wasn’t that close. The Cavaliers had 25 assists, including Love’s five, LeBron’s four and a whopping 10 dimes from Dellavedova.

A swing sequence from LeBron (in the short corner) to Dellavedova (above the break) to Love (on the left wing) ended with Love darting the ball to Timofey Mozgov, who successfully pinned Whiteside as the ball traversed the perimeter, and finished the play with an easy lay-in.

Dellavedova connected with Thompson on three alley-oops, and Thompson (6-9 FGA) and Mozgov (4-6 FGA) were automatic on mostly wide open plays.

The Cavaliers’ vulnerabilities are hypothetical — their only real problem would be if LeBron was lost for any significant length of time. With LeBron James and Love initiating the offense, there’s little need for a traditional point guard — these are superstars who see the court like a chessboard, and possess the vision to see a play developing three or four moves ahead. Thompson and Mozgov aren’t great passers in a vacuum, but both players routinely find James and Love on cuts or pin downs, and vice-versa, because of Cleveland’s team wide awareness of spacing on the floor.

Miami’s troubles, by comparison, are much more tangible. The Heat are vulnerable to shooting woes in ways the Cavaliers couldn’t fathom. Dragic and Green, two of the only Miami players capable of creating their own shots, went 2 for 16 from the field before hitting their final two attempts. The team has positioned Whiteside to be a star on both ends, but his six blocks were negated by Cleveland’s ability to stretch him out of position. The Cavaliers outscored the Heat in the paint, 46-38, and outrebounded them, 49-38.

LeBron dunked on Deng whenever possible, and slow-cooked Winslow, a rookie, on a series of successful post-ups. Mo Williams and Love picked Miami apart like slow-cooked BBQ on the pick-and-roll — patiently baiting switches so Love could take it to Wade or Winslow.

Dwyane Wade and Chris Bosh are legends for what they’ve done, but their accolades won’t guarantee them another crack at a title run. Wade, age 33, touched his ceiling on Friday, scoring 25 points on 8 for 15 shooting, knifing into the paint and feasting on mid-range jumpers and foul shots (8-8 FTA). Bosh scored 16 points and facilitated from the high post.

Wade and Bosh finished +4 and +3, respectively, on the game. They were let down by their supporting cast — Winslow (-16), Green (-18), Stoudemire (-16) and McRoberts (-17). LeBron James’ gravity can make Dellavedova/Thompson pick-and-rolls look like Gary Payton/Shawn Kemp. Miami’s stars can’t lift their supporting cast quite as high.

Cleveland will only be more versatile and capable of self transformation when Irving and Shumpert return mid-season, and the Cavaliers proved last season they can overcome any number of injuries in the lifeless East. It would be nice to say the same about Miami or Chicago, Atlanta or Washington. These second-tier teams have another 75-80 games to search high-and-low for that gear, but Cleveland already has it, and as long as LeBron James is standing upright, the preseason chatter about Miami’s title aspirations is merely wishful thinking.