Enter the man once rumored to be the head coach of the New York Knicks, who has become an assistant for the Golden State Warriors: Luke Walton.

If you are old enough, you may remember a time when Luke Walton was one of the best college basketball players in the country at Arizona. Or, you might remember him seeing quality time on the floor while playing for an excellent version of the Los Angeles Lakers. However, if you are not that old, you might remember nothing more than Walton sitting at the end of benches or worse: 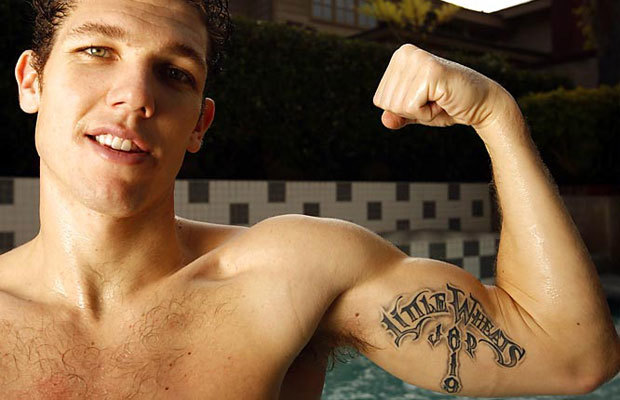 This SCREAMS NBA head coach, in my humble opinion.

No matter. That is merely a young Luke Walton flexing the guns, while showing off his tattoo, and presumably getting ready to go on a date with Britney Spears (It is not true, fwiw).

Unlike former teammate Derek Fisher, who is coaching the Knicks, Walton isn’t going to have to oversee a reclamation project. He won’t be put in a position to implement a new scheme, coach in the shadows of a legend, or anything that makes being a new head coach in the league seem to be more awful than desirable. Basically, Walton’s only goal is to keep the ship afloat until Steve Kerr is ready to come back.

“Don’t mess up too much while Kerr is gone.” That might not seem like the hardest or most complex of issues, because it isn’t, but it will be a great spot for Walton to get a dry run at the whole “being a head coach” thing. Mind you, he will be doing this with the benefit of having one of the better rosters in the NBA and — as importantly — a system implemented by someone else. That system has already produced an NBA crown.

The foundation of success is already there. All of it. Players, other coaches, the system, the entire shebang. No other new head coach has this kind of luxury heading into the season.

The best part of all of this for Walton is the fact that he won’t have much pressure — not because people think poorly of him, or have lowered their expectations of Golden State because Kerr is out, but because people are going to judge Golden State’s successes or failures this year based off the team’s postseason run, for which Walton will avoid having any scorn thrown his way. He will be back to being an assistant by then.

There may come a time, possibly even very early in Walton’s interim head coaching career, when the media will want to poke, prod, and/or make fun of some of his late-game decisions — possibly even hurling him under the bus if the Warriors struggle early. Yet, that is rather minuscule pressure in the grand scheme of things, and it’s certainly a solid trade-off for having the best practice run an aspiring head coach could ever ask for. This probably isn’t lost on Walton.

Luke Walton is probably a lot of different things to a lot of different people. I still remember him fondly as one of the best overall big men in recent college basketball history, as well as a solid member of some very good Laker teams. Others might, um, remember him in more jocular, social media-flavored ways, but the perception of Luke Walton as a person/athlete/coach is about to take yet another turn in the coming months — or sooner if Kerr is able to get back.

Saying there is “no pressure” on Walton might sound like an understatement, because it probably is. However, given a roster full of talent, coupled with (presumably) not having to coach this team during the playoffs, offers Luke Walton the chance to have his cake and eat it too.

My oh my… how things could have been drastically different had Phil Jackson hired ‘Little Wheats’ instead of Fisher in New York. I guess timing really is everything after all.