Magic Johnson wasn’t always a household name. Long before there was Hall of Fame Magic Johnson or “one of the greatest players to ever play” Magic Johnson, there was simply Magic Johnson — an exciting rookie who was coming off one of the most hyped, mythologized, and historically ingraining NCAA tournament championship games in the history of college basketball.

It was Michigan State versus Indiana State; the Inner City versus the Country Bumpkins; and most importantly, it was Magic versus Larry Bird before people even knew what that meant. It was the beginning of the birth of Magic Johnson as a beloved hero. This moment in Salt Lake City in March of 1979 occurred years before HIV would make him a spokesman for education, tolerance, and understanding on an awful disease that was incredibly misunderstood at the time. That meeting with Bird unfolded just a short time before Magic started an NBA career that would become the stuff of legend.

However, in the 1979-’80 season, the Los Angeles Lakers were a team led by Kareem Abdul-Jabbar. It was his team. Yes, there were most certainly other players of note on the roster, but lost in history to new generations of basketball fans was the dominance of the future Monster Shouter — for good reason, too. Jabbar was entering his 11th season in the NBA, all of them marked by a double-double average. He was as complete a center as anyone had seen at the time. 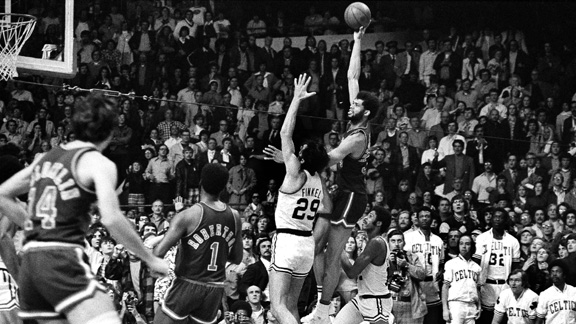 The most revered and remembered thing about Kareem is the sky hook — the one shown above was his game-winner in Game 6 of the 1974 NBA Finals against the Boston Celtics in the Boston Garden. The sky hook was a shot so wonderfully crafted, so utterly unblockable by those attempting to deny him near the rim, that no other basketball player has been able to duplicate the artistic feat in subsequent decades. Unfortunately, many other great aspects of his career and abilities have been lost to time, new legions of fans, and the live in the right now now moment of the social media era — and probably even a viewing generation before that. Kareem’s longevity will always remain impressive, but that same longevity makes him a player who belongs to a more distant era.

What added to Abdul-Jabbar’s greatness? He rejected his opponents’ wayward, misguided, and fruitless attempts at scoring over him. How proficient was he as a shot blocker? He averaged just over 3.4 shots per game from the 1973 season (the first season in which blocks were recorded) all the way to the 1980 campaign. He also happened to score on over 70 percent of his field goal attempts, all while helping his teammates score: He averaged over four assists per game in that same time span.

As you can now –at least hopefully — see, the 1979-1980 Lakers weren’t Magic’s Lakers. They were the sole property of Kareem Abdul-Jabbar. Now, the storylines at the time may have not exactly matched the idea of what Los Angeles actually happened to be. No, after Magic Johnson was drafted by the Lakers in the 1979 NBA Draft with the number one overall selection, well, everything changed — kind of.

Expectations changed. The atmosphere may have changed around the organization as well. Minimally, fans’ feelings about their favorite Laker players changed. While the team’s success may have hinged on how well Kareem was playing, it was the charismatic Johnson who won over a city before even playing a second in a purple and gold uniform.

Smiles can only get an athlete so far, however. Luckily for Magic, his smile, and those depending on his abilities, his rookie regular season went as well as anyone could have hoped for. As a 20-year-old, Magic averaged 18 points, 7.7 rebounds, and 7.3 assists per game in his inaugural season, during which he showcased glimpses of brilliance that would later be the foundation for The Showtime Lakers.

As in today’s NBA, though, the playoffs are a different beast when compared to the regular season. Everything is amped up to a higher level. The great players attempt to become immortal, the good players often regress, and the average players tend to lose all their minutes. It is, for a lack of a better way to put it, the best basketball games being played in the world by the very best players. All of them have abandoned the idea of what a loss can mean for tomorrow, because they don’t care to entertain the notion that they could do anything other than win.

Magic Johnson wasn’t just some ho-hum basketball player, though. He was going to be one of the greatest to ever play. Naturally, the six-foot-nine point guard ended his first playoffs nearly averaging a triple-double: 18.3 points, 10.5 rebounds, and 9.4 assists per game — and that is not even mentioning that he averaged over three steals per playoff game as well. 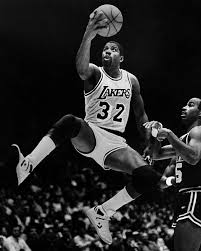 He was not only as good as advertised, but better. It only seemed like a Kareem-led L.A. team, with Magic more than coming into his own as an NBA player. It also seemed that the Lakers were going to win the NBA title at the end of Johnson’s rookie year. Then… it happened.

But before it happened, Game 2 of the Western Conference Finals — against the defending champion Seattle Supersonics — happened.

The Lakers were coming off a crushing Game 1 loss to the 1979 NBA champions. Magic entered Game 2 with a reported 101-degree fever, and hope started to dwindle in Los Angeles. However, like any good Elmore Leonard story, it was the most complex of personalities who would wind up saving the day. Just like a Leonard-written character, everyone should have simply seen it coming.

People might remember that Magic ended up with a triple-double, yet it was Jabbar’s epic box-score of 38 points, 11 rebounds, and 7 blocked shots that helped put Los Angeles right back in the series. So much so, in fact, that they never lost another game to Seattle. The Lakers only encountered a small hurdle, and because of their backbone, Jabbar, they leaped miles over it.

The NBA Finals were set. It was to be the Los Angeles Lakers against a Philadelphia 76er team centrally comprised of Julius Erving, Darryl Dawkins, Bobby Jones, Maurice Cheeks and Doug Collins. No fan of Dr. James Naismith’s game could possibly be disappointed.

Legends and great stories don’t come about without some form of tragedy, however. The 1980 NBA Finals, or the folklore of Magic Johnson, wouldn’t have happened without some Shakespearean events leading up to the now (in)famous Game 6 over three decades ago. So, yes, this is where it happened.

With the series tied at two games apiece, Kareem injured his ankle in Game 5. Los Angeles ended up winning that game, but the thought at the time was that they may have won the battle, yet possibly lost the war of attrition. Even many in the Lakers’ front office assumed Jabbar was so done that they would travel to Philadelphia without him and presumably lose Game 6. Even those within the Los Angeles organization felt that if they were going to win the title, it would have to be in Game 7 at home in the fabulous Forum.

While that last statement might read more like a fictional plot line placed to build a climax, it was real. Well, at least — again — presumably, since the team didn’t even bother to take celebratory champagne or other customary victory objects with them on the flight to Philadelphia.

Now this is where the rest of it happens.

Without their best player, leader, and future all-time all-timer, Kareem, being able to play, the Lakers did the next logical thing — they put the entire franchise’s hopes and dreams of avoiding a Game 7 on the shoulders of a 20-year-old named Earvin Magic Johnson… on the road… against the most talented team in the NBA at that time. 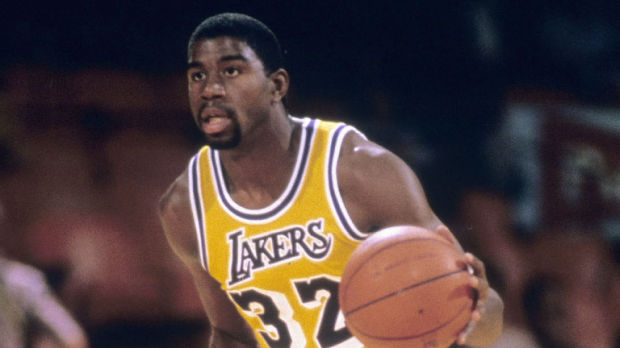 Well before people even dreamed of the idea of having a point-forward, the Lakers started Magic at center. Why? Because, honestly, why not?

The game itself didn’t end up being something to write home about. It was a good game for all intents and purposes, as both teams had their runs during it, but Los Angeles ended up winning by 16 points, 123-107. That type of game is usually not remembered fondly by history — or those who pen it.

Johnson’s performance, though, was.

Not being old enough to witness the game live (or, ahem, on tape-delay) when the spectacle of it all was originally aired, I can only assume the United States Postal Service crashed (that was our fathers’ Twitter, right?) after Magic “played” all five positions in a dominating performance. By the time the final buzzer made its last awkward noise of the season, Magic Johnson scored a game-high 42 points and hauled down 15 rebounds, as well as providing seven assists to his teammates.

The Magic Johnson story was born in college and that 1979 meeting with Larry Bird, but the legend of Magic was originally created in Game 6 of the Finals on May 16, 1980. That Friday night in Philadelphia served as the official announcement that Magic Johnson was a serious player of relevance.

Words can’t properly describe how impactful Johnson was on the 1980 NBA Finals and, obviously, Game 6. While rookies often develop at a faster rate in today’s NBA, no one with a sane mind would expect them to carry the burden Magic did — and in the way he did it — 35 years ago. Not even the sport’s most gifted physical specimen in the present tense, LeBron James, has been asked to do what Johnson did by playing every position in one night.

I first saw this game when I was seven or eight. My father had it on VHS or some other dated device, and he showed it to me as though it was an educational video. Outside the fact that is how I thought every basketball player played (thanks for heightening my expectations to unrealistic levels and ruining my jumper, Dad), I never looked back. Magic Johnson became my favorite player until the day he retired, and remained so until I fell in love with Eddie Jones (that’s another story for another day).

A plethora of injuries have changed the course and texture of this year’s playoffs. I intended to write this to not only help a younger fan learn a little about how awesome Magic was in those Finals, but to hopefully provide some context to the matter of how the Washington Wizards and Cleveland Cavaliers should not simply give up just because they lost key members of their rosters. I mean, it is not as though any of them lost Kareem.

But then I remembered: Not only don’t they have my dad at home recording it with some weird gadget… they don’t have Magic Johnson, either.