The Spurs beat the Grizzlies down on Thursday, 103-83. For the umpteenth season in a row, San Antonio is very, very strong — its ever-ready offense now equipped with a bronzed defense that is holding opponents captive in a straight jacket as they sing for Brazil.

It might be a three-team league this season. Golden State is undefeated and there’s Christmas music playing in the streets. Cleveland already has the No. 1 seed in the East without Kyrie Irving and Iman Shumpert in the lineup. For the other 27 teams in the NBA it’s about the journey, because there’s little chance somebody else steals the Larry O’Brien trophy from that trio.

Memphis will not win the NBA title this season, or likely ever during the Marc Gasol, Mike Conley-era for the franchise. As the Grizzlies transition from Grit n’ Grind to their next iteration, the expectations for this franchise are different then, say, the New York Knicks, who despite not winning a title for 40 years have the country’s largest market and most excitable fanbase to appease. It’s different for Memphis, a franchise with an unmistakable identity, beloved players, a spot at the table in the Western Conference and the respect of the league — not to mention hundreds of millions of dollars in franchise value as the league booms. It’s a good time for the Grizzlies.

Except that their season began in disastrous fashion. A 50-point loss to the aforementioned Warriors was the loudest of five double-digit losses in the team’s first nine games. The aftereffects from the underwhelming start still linger in the numbers: Memphis is bottom 10 in offensive and defensive efficiency. This team was fashionably slow-and-steady over the past five seasons, but it was impossible not to wonder if the league, amidst a small-ball enlightenment, had finally past the Grizzlies by. 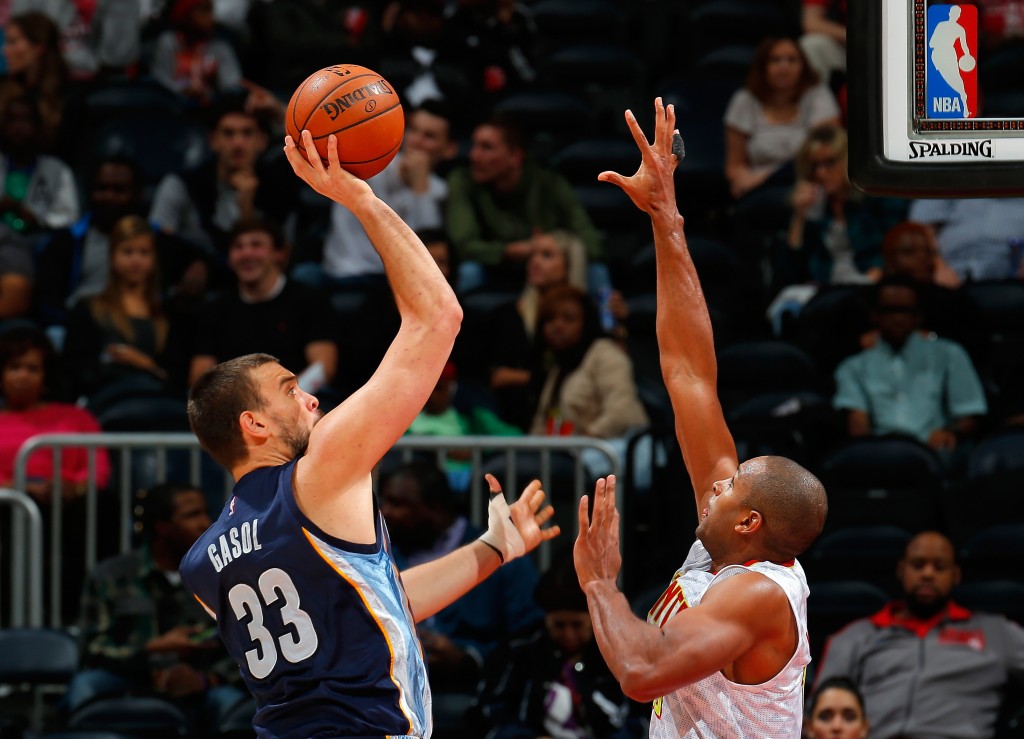 The circumstance has become less dire in the past three weeks following the acquisition of Mario Chalmers from the Miami Heat. Aside from the irony of Chalmers ending up in the one basketball city that may never forgive him, Chalmers has become an entirely new player for the Grizzlies, and it’s sparked their offense in several unforeseeable ways. Memphis has won 8 of its past 11 games since the deal, and over that stretch the Grizzlies have the fourth-highest OffRtg in the league (104.2 points per 100 possessions), per NBA.com.

“But, like, these are the Grizzlies we’re talking about?” Yeah, right! As daunting as it may be, Memphis is playing Top 5 offensive basketball, albeit at a scratch-and-claw pace, and the ascension has been spearheaded by its proficiency at the foul line. The Grizzlies are the best team in the NBA at the line, shooting 84 percent, and no team is scoring more of its points (22 percent) on free throws. This cornucopia of easy points has helped to supplement an offense still scraping the bottom of the barrels in 3-point percentage and frequency.

For those wondering, Memphis is getting to the line more often than in past years — a subtle detail that reveals quite a lot. Memphis scored 17.9 percent of its points on free throws in 2014-’15, 15.7 percent in 2013-’14 and 17.6 percent in 2012-’13. While the dip in 2014 is mostly an outlier (Gasol missed much of the season with injury), these percentages are between 4-5 percent lower than the Grizzlies’ current rate.

Leading the pack is Chalmers with 5.7 FTA per game. In his final season in Miami, the percentage of his points from free throws was only 25.3 — he was far more reliant on 3s (26.9 percent of his points) and midrange jumpers (8.6). In 11 games with Memphis, a whopping 43.7 percent of his points are coming from the stripe, along with 30.2 percent coming from the paint. Meanwhile his dependance on jump shots is down form behind the arc (21.4) and midrange (4.8).

We didn’t see Rio The Driver much in Miami, but he has good timing on his penetration and a knack for drawing contact. Against Dallas, he rejected a screen once Dirk Nowitzki was caught in no-man’s land, and sprinted into the lane for the foul. He targeted Nowitzki throughout the game, never a bad idea for a speedster with bad intentions. Watch Chalmers make his break when he sees Nowitzki standing between him and the paint on a fastbreak:

Chalmers isn’t great from the restricted area, shooting a gnarly 38.5 percent, but that figure should pop up. He’s a tall, slender point guard with a knack for using his length in the air. Something he does throughout his “duel” with Russell Westbrook:

What Chalmers is better known for, dating back to his LeBron James “Yes Man” days, is spotting up and shooting. He’s hitting 34.8 percent from above the break, and since joining Memphis, Chalmers has made 41.2 percent of catch-and-shoot 3s. Chalmers has also made 12 of 24 shots from outside the paint and midrange.

He and Gasol have shown nice timing on the high screen-and-roll, with both players using their height to scope out open spots in the defense well ahead of the actual pick:

With Chalmers on the floor, Memphis is scoring 108.2 points per 100 possessions, per NBA.com, and outscoring opponents with a NetRtg of 11.2. Chalmers has a 24.2 assist percentage while he’s on the floor, and a usage rate of 25.9, which is first on the team.

Chalmers debuted for Memphis with four steals and he has kept up an average of 1.4 steals per game — a nice benefit of his length. He’s not a ball stopper, but he has fine timing, and he’s been very effective trapping the pick-and-roll:

Memphis coach Dave Joerger is only playing Chalmers 19 minutes per game. In the 300 minutes Chalmers has been off the floor since joining the team, Memphis is scoring just 101.5 points per 100 possessions with an eFG% of 48.3.

The hesitancy from Joerger shouldn’t be that playing Chalmers would sabotage the Grizzlies’ defense. The starting lineup has been underperforming all season on that end — Conley, Gasol, Zach Randolph, Jeff Green and Tony Allen are being outscored by 13 points per 100 possessions, per NBA.com, falling to 71.2 percent on the defensive glass with predictably bad shooting percentages.

Memphis is a bottom 5 team in opponent’s transition points, a byproduct of being a slow team that can’t shoot:

Over the past 11 games, Memphis is 19th in defensive efficiency, but the group does have two things going for it. Memphis is 2nd in the NBA in opponent’s points in the paint over this stretch, and the Grizzlies are forcing 17.5 turnovers per game, with most of their lineups featuring multiple long-armed pass deterrents. The Grizzlies forced five turnovers in five minutes against the Mavericks.

Allen picked up a sixth turnover by blinding Chandler Parsons on a backcourt pass to Deron Williams, jumping into the lane and elbowing the ball to a teammate. It’s no surprise, but Allen does a great job of helping along the baseline when he’s on the floor. He has the ability to dissuade opposing guards from making the pass to his man in the corner, while also remaining within arms length of the paint.

On this play, his shadow stops Dwight Howard from catching Patrick Beverley’s long pass over Gasol:

Allen is frequently unplayable offensively. His propensity for missing layups and his being a non-threat with the ball too often negates his defensive gifts. However, in small bursts, Allen can hang in the half-court. He’s hitting 33 percent of his corner 3s right now, almost a decent figure, and Allen has always possessed a great knack for cutting to the basket.

Gasol, with eyes in the back of his head, will sometimes find Allen alone under the basket, and the play almost passes as designed:

Here’s another one that Memphis missed. The cut was so well done that the vibrations sent Houston’s defense out of whack and the play yielded Courtney Lee an open jumper:

Opponents will work around Allen’s masterful defense by isolating Barnes or Jeff Green in the corners, blowing by them and entering the paint from the side. This forces Gasol or Randolph into man-down disadvantages, and teams like Atlanta, equipped with shooting bigs, will pull them out of the paint before the drive.

When enough of these defensive breakdowns pile up over the course of a game, suddenly Memphis is playing from behind, and this roster is built to play with a lead. Conley has a minus-1.0 NetRtg during the 8-3 stretch because of the poor two-way performances and the team’s dearth of lineup flexibility. To his credit, Joerger has played lineups with Gasol or Randolph as the lone big man. When Barnes replaces Randolph in the starting five-man unit, for instance, the team is scoring 114.2 points per 100 possessions and blowing teams off the floor… but the lineup has only seen 49 minutes. That group is pulling down nearly 90 percent of defensive rebounds and has a 59.7 eFG%.

Then there’s the issue of Chalmers averaging 19 minutes per game, the same as JaMychal Green (who does what again?). Memphis hasn’t had the traditional resources to add real shooting, but in Chalmers the team has added a playmaker on the perimeter. Playing Conley, Chalmers and Gasol at the same time is like having a three-headed point guard on the floor, and that boon of creativity can stretch the team’s limited supply of shooting. Suddenly players are open and the ball is buzzing around:

Suddenly defenses have to worry about somebody other than Conley making them pay off the dribble:

It’s not a difficult concept. Memphis can surround Gasol with playmaking on the outside, stretch the defense and let Big Spain go to town against a single defender. The reverberations from Gasol’s offense kick around to Lee, Barnes, Chalmers and Conley. Randolph is a skilled enough player to find buckets in the cracks of these lineups, or as the lone starter out with the second unit.

The key is debunking the predictability of the team. It’s been killing Memphis on both ends. Houston had 14 steals last week. Atlanta clamped down on Gasol on the block and took Memphis out of the game, running away with a 31-19 fourth quarter and a 15-point victory. Memphis couldn’t buy a shot against San Antonio, which made things too simple for the Spurs’ tip-top defense.

The one wrinkle for San Antonio was keeping Chalmers off the foul line, where he went 8-for-8, and Rio finished with 15 points in 19 minutes. Chalmers had a miserable shooting game, but his ability to get to the line kept the Spurs on their toes when he was on the floor, and presented the Grizzlies with an avenue toward easy points. Here’s the thing — Joerger never played Conley, Chalmers and Gasol together. As the season marches on, when and how often Joerger lets Chalmers ride with the starters will tell a lot about where this Memphis team will end up come springtime.