When Oklahoma City is truly humming, something the NBA has seldom seen the past three years, it is the scariest team in the NBA. If you slipped truth serum into Golden State’s cup, the Warriors would admit the Thunder’s combination of unrivaled star power, length, and explosiveness is the true antidote to the Splash Brothers’ poison rain.

Golden State, Oklahoma City and Cleveland, in some order, have the highest ceilings of all NBA teams. As great as the ancillary pieces around Steph Curry and LeBron James are, however, there is simply no comparison for Durant and Westbrook — a pair of true-blue Top 5 players on one team.

Oklahoma City opened its season with a victory over San Antonio, a triple-OT nail-biter with upstart Orlando, and a dominant win against an overmatched Denver. Through seven games, OKC (4-3) is predictably near the top of the NBA in scoring — second in offensive rating (108.9), per NBA.com — and pulling down 55.6 percent of available rebounds. In upward of 100 minutes, the Thunder starting lineup, featuring Andre Roberson and Steven Adams with Durant, Westbrook and Serge Ibaka, are running teams off the floor — posting a NetRtg of 20.6 and churning at more than 104 possessions per 48 minutes.

Starting games has never been a struggle for OKC. Over the years, a revolving door of nos. 4 and 5 options have taken the court next to Durant, Westbrook and Ibaka at closing time, but none have stuck as viable fourth quarter options. Images of Derek Fisher and Thabo Sefolosha clanking 3-pointers promptly come to mind. All the while, the ghosts of James Harden haunts over this franchise; Oklahoma City wouldn’t let Dion Waiters rock the No. 13 jersey, the organization is so jaded.

The team’s second-most used lineup this season (again, it’s only been seven games) features Waiters over Andre Roberson. In 27 minutes, the Thunder are scoring 109.5 points per 100 possessions with this lineup, but they’re hemorrhaging 111.3 points on defense — about 23 points worse than the team’s starting lineup.

Head coach Billy Donovan has been closing games with Waiters and Enes Kanter around their stars, and in 21 minutes that group has scored infinity points, but they’ve also been venerable to fourth quarter collapses on the defensive end. In back-to-back-to-back losses to Houston, Toronto and Chicago last week, the Thunder were outscored 86-68 in the final frame.

There are no shortage of questions hanging over Oklahoma City’s organization at the moment. Of those pertaining solely to their basketball operation, who should be playing late in games stands alone as the most important question facing the Thunder. 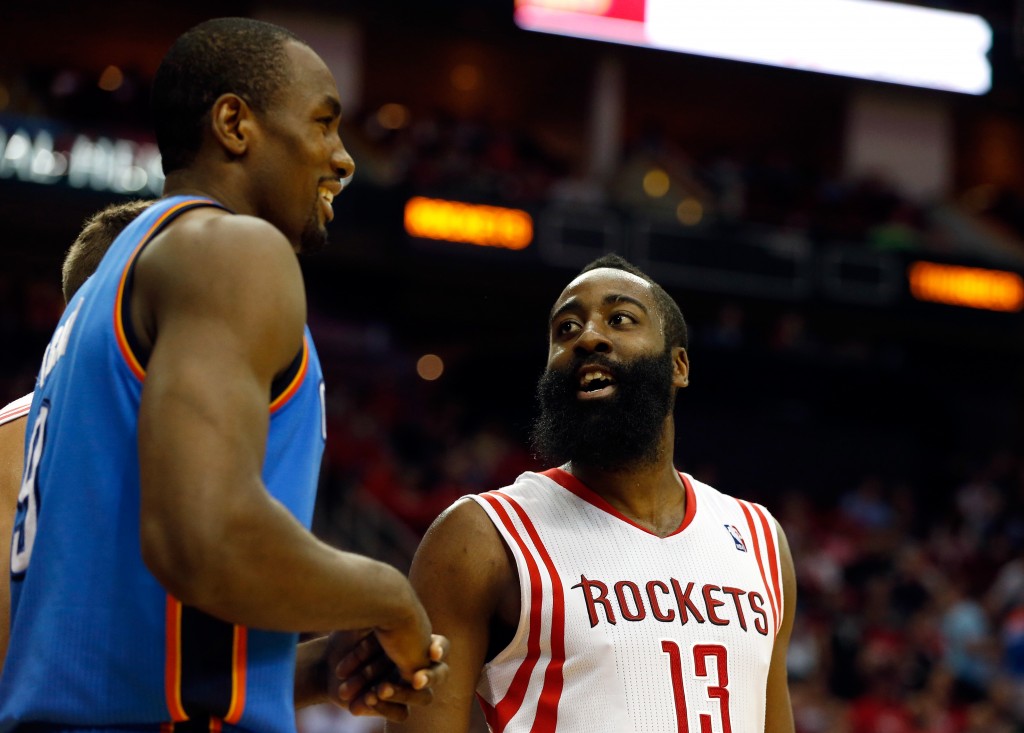 As Sean Woodley and I discussed at length last week, Houston’s second half comeback against Oklahoma City was a fascinating snapshot of one of basketball’s best rivalries. The first half was all fun and games for the Thunder — Westbrook hitting his patented “cotton” shots from the elbow, Durant setting “chin up” screens for Westbrook and darting through the open lane. Westbrook came out firing to open the third quarter, finding Adams ahead of Dwight Howard down the floor to give the Thunder a 15-point lead:

At 9:54 in the third, Westbrook picked up his fourth foul, because Westbrook only knows one speed, he’s aggressive to a fault, etc, etc. The Rockets to that point had been miserable from the field, and thus unable to slow down the Thunder. With Westbrook forced to sit down for the duration of the quarter, suddenly Houston had a window, and James Harden, Ty Lawson and Trevor Ariza sent a restricted Thunder rotation into a panic.

Houston switched Oklahoma City at will, stretching thin a small lineup featuring guards D.J. Augustin and Waiters, two do-nothings on that end of the floor, incapable of defending themselves. Harden massacred Adams on one hideous switch, with Ibaka unable to leave Howard in the paint, and Durant refusing to participate:

Without Westbrook to run the show, Houston’s frenzy of perimeter play overwhelmed Oklahoma City on both ends. Lawson had three of his four steals during the third quarter, and when the Thunder foolishly left Kanter and Waiters alone with three reserves, Houston packed the paint and dared Roberson and Kyle Singler to make them pay from the arc.

Donovan refused to play Durant/Ibaka at the 4 and 5 — a lineup that historically obliterates anything in its path, and yet never truly caught on with former skipper Scott Brooks, and has failed to make the early-season rotations in 2015-’16. At the same time, Houston went super-small during the third, slotting Ariza up to power forward where his perimeter shooting and athleticism bothered Oklahoma City to no end.

Houston outscored Oklahoma City 28-14 in the third, and despite a spirited effort from Westbrook, including the latest riveting chapter in Westbrook/Patrick Beverly’s rivalry, Houston also won the fourth, 28-26. On a night where the Thunder outrebounded the Rockets, 55-34, and made 10 3s, it was the late-game predictability which ultimately sealed the Thunder’s fate.

The Rockets revolve around Harden’s style of play, but are not shackled to him as the sole creator and perpetrator of points. Nobody creates more perimeter shots for their team than Harden, and his ability to penetrate and kick to open shooters — when he isn’t pitching a tent at the foul line — is prolific.

Harden sunk a 27-footer in Westbrook’s grill to give Houston a 107-100 lead. The gusto of his shot worked two-fold — it gave Houston a sizable advantage in the final two minutes, and it also zapped Westbrook into AT ALL COSTS mode. The final Thunder possession was desperate, free of nuance. Were Westbrook and Durant even remotely aware of the other eight players on the floor, or that there was significant time left on the clock, when they attempted these half-hearted prayers?

The same trouble arose over the final eight minutes against Toronto, where Oklahoma City coughed up a 87-80 lead at home. Westbrook had 16 assists on the night, and the Thunder dropped 42 points in the third quarter to take an eight-point lead into the final period. As the Raptors clawed back into the game over the final minutes, however, Westbrook and Durant stopped looking for teammates. Watch Westbrook miss a well-timed cut from Roberson, fling an aimless pass to Durant, and allow DeMarre Carroll to bait him into a catapult from 30 feet at the end of the shot clock:

DeRozan attacked Waiters throughout the fourth, giving the Raptors a 99-97 lead with 47 seconds to go on a simple isolation, pump-fake. The Raptors scored 50 points in the paint, and DeRozan sank a pair of foul shots late, following a missed Durant free throw, to seal the game. Westbrook missed drive after drive at the rim, finishing 8 for 21 from the field, and the Thunder were outrebounded (45-41) and outdone at the stripe (32-12 FTM).

The Thunder are a great rebounding team, particularly on the offensive glass where the team is grabbing 31.9 percent of available rebounds, per NBA.com, tops in the league. Donovan, as Brooks did before him, helps to ensure Oklahoma City’s dominance on the boards by always playing tall groups with a traditional center. The argument against these lineups are fair — Roberson/Adams place a cap on the firepower of the starting lineup — but scoring points for Oklahoma City should never be a problem with Durant and Westbrook on the floor.

The key is variability and involvement in the half-court. Let me state very, very clearly: Westbrook and Durant are both skilled passers; Westbrook has evolved into one of the more creative two-handed lead guards in the game. It’s not trolling the Thunder superstars, however, to suggest the team doesn’t move the ball enough. Oklahoma City is 22nd in assist percentage (53.5), and too often the Thunder’s creativity during the first three quarters evaporates under the bright lights of the closing minutes.

Take the Bulls game, for instance. Durant had three assists in the first five minutes, finding Adams early-and-often in the lane by bending Chicago’s bigs:

The game began to change dramatically during the second period as the Thunder clammed up behind a 7 for 26 shooting slump. Oklahoma City hit eight of its first 10 shots, mounting a lead while Chicago failed to record an assist for the first six minutes. Westbrook gradually got isolation-crazy, however, too often settling for contested shots. Meanwhile, Derrick Rose had a field day penetrating the lane, routinely catching Adams outside the paint hugging Bulls’ bigs.

Rose and Jimmy Butler dominated the backline of the Bulls, and were unselfish, willing passers throughout the game. Doug McDermott, Aaron Brooks and Tony Snell all hit crucial 3s down the stretch, and Chicago finished with six turnovers and 27 bench points, compared to nine and 18 for Oklahoma City.

The Bulls secured control of the game by exploiting the Kanter-lineup throughout the fourth quarter. Rose and Pau Gasol hunted Kanter down, pressuring Donovan to switch Ibaka onto Gasol. The story leaving the game was Rose’s 10-0 run down the stretch, but the play of the game was Chicago switching Westbrook/Ibaka and Rose patiently supplying Gasol with the game-winning look:

Oklahoma City squashed Phoenix on Sunday, 124-103, to jump back into the green. The Thunder had 26 assists, shot 60.8 percent on 2s and throttled the Suns on the boards, 52-33. A locked-in Thunder defense is a dangerous proposition for any opponent — Oklahoma City forced 23 Phoenix turnovers, creating a bounty of extra possessions for its diesel-fuel offense.

Tonight, Durant comes home and the Thunder battle the Wizards. Washington has been an up-and-down team through six games, but it’s a multi-dimensional club that can throw multiple looks at Oklahoma City. Randy Wittman will try small-ball lineups that unleash John Wall and Bradley Beal, but he also might trot out the Marcin Gortat, Nene frontline that spearheaded a Top 10 defense a season ago if the Thunder are breaking them down. Wall is going to find shooters darted around the arc, and if the Wizards are hot early-on, the Thunder will be challenged to find a lineup that can hang. It’s called adjustments — even the best teams have to make them.

The Thunder are capable of beating anybody, any night; all criticisms of Donovan’s early substitution patterns and the team’s uneven performance through seven games must be fed through that tube. This team is an easy target because of the moves they’ve made and the blemishes that have piled up in the wake of the James Harden trade, not to mention Oklahoma City’s unbelievable injury luck. Any team this talented is a title threat, that much is not up to debate. How Oklahoma City addresses its imperfections, or its willingness to address them at all, will be the difference between a premature demise or being the best team in the league.