The narrative is right there if you want it bad enough. Go ahead, say it. Tell me that the Rockets lost Wednesday night because of their addiction to the long ball, their neurotic, overly calculated mental-hoops. Enlighten me, oh, Round Mound, on why the Clippers are a real basketball team — “they are tuuuurifcally talented,” Chuck might say — and how the Rockets are playing some divergent spectacle of the sport you excelled at decades ago.

Houston bricked a cataclysmic 36 triples on Wednesday, finishing the 110-95 loss against Los Angeles with a flurry of rushed bombs in an attempt to accelerate a comeback; this was coupled with a prolonged Hack-a-Jordan sequence, the kind of theatre only the dirtiest of child predators should be forced to sit through. That Jordan was terrible from the charity stripe (12-26 FTA) in a 15-point victory goes a long way to describe how unpleasant the Rockets performed. Harden, forever the avatar for Morey ball, finished with a rancid stat line — 3 for 13 FGA, 0-7 3pA, five turnovers — and managed just 3-5 shooting from the line, something like half his usual attempts. In a word, it was an ugly game for the MVP candidate. 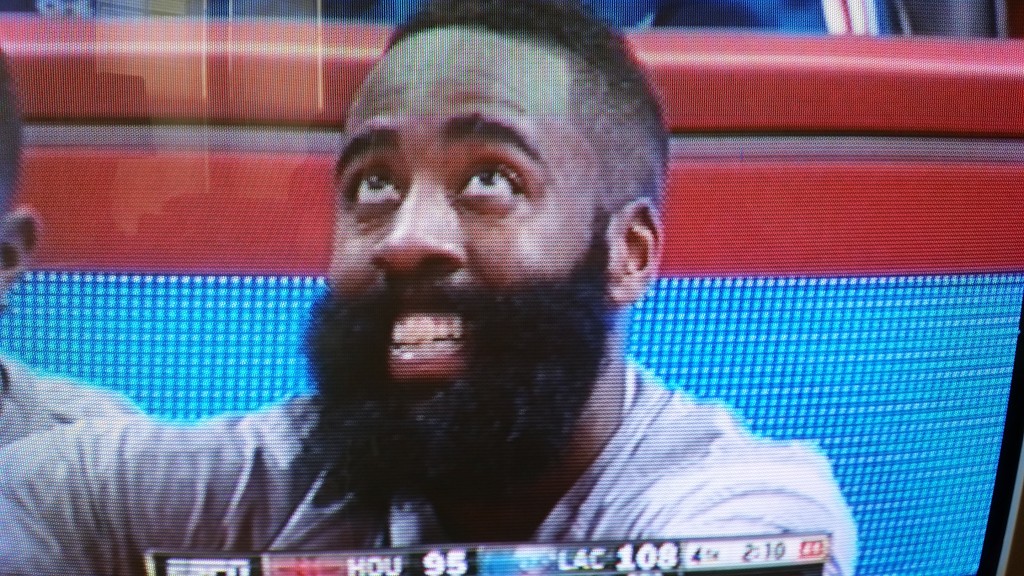 What a mean mug. He must have seen his stat line against the Clippers Wednesday night.

In a week where Charles Barkley literally called the general manager of a winning NBA team an idiot on national television, then proceeded to insinuate the entire advanced stats community — as if all of us writers are getting together on Tuesday nights to share long strings of code and compare calculators — was a bunch of pathetic dweebs who can’t get girls, this game and its outcome was particularly disappointing. I wish no ill will toward the Clippers, and I’m not really into the Rockets, but it is easy to see how someone like Barkley would revel in the result of this game: See, I told you those 3-ball shooting knuckleheads aren’t a good team. I told all those funny lookin’ writers that they ain’t got no business in a player’s game.

Here’s the thing: As Hal Brown so eloquently wrote about this week, “analytics” are a largely misunderstood phenomena amongst people like Barkley — by which I mean, generally speaking, old, basketball curmudgeons.  The word analytics is really just a fancier word for information; what separates points per game from points per possessions, as Brown states, is really just division. Is the form of “Analytics” or “Advanced Stats” a bit too grandiose? Perhaps. If we referred to what this data truly was — numbers from the games — maybe it wouldn’t be so scary.

Brown goes a long way to describe how sitcom-y the bullying tactic Barkley employs is, and how the name-calling reveals a particular level of fear. As silly as it is to even suggest, #AnalyticsHaterz have reason to be nervous — the game they grew up playing is disappearing, dissolving into the new age of the sport. Charles Barkley is always going to mean a million times more to basketball than any writer could ever fathom of being, but at the root of his insecurity about advanced stats is the fear of watching the game he played vanished before his eyes.

This becomes so evident when you hear him refer to “analytics” like it is a conspiracy, and not information taken directly from the games themselves. The debate between pro- and against-advanced stats types often mirrors debates of global warming; each side is arguing a separate, detached point, and thus no intellectual discussion occurs. In basketball analytics and global warming, one side is clearly defending fact (these ARE the number of points a team is scoring per possession; this IS how much ice is melting near the North Pole) while the other side is arguing opinion (plus/minus doesn’t see basketball how I SEE basketball; if the weather where I LIVE is cold in January than global warming is wrong).

This “debate” is really just a battle of pride, of defending an established hierarchy of importance. Former players and coaches are held in the highest of esteems by the basketball community, and that much is indisputable — they are the ones who spent time in the trenches and on the floor. But the closed door policy that so many legends have toward contemporary basketball writers and thinkers — the nerds, as Barkley would say — is, at best, a defense mechanism, and, at worst, preposterously narrow minded. Is it that hard to admit both numbers and the eye test can co-exist? We already do this with counting stats; borrowing a thought from Zach Lowe, any data you can find within three clicks on NBA.com isn’t that advanced.

Let’s return to the Rockets/Clippers garbage pile from Wednesday. Someone from Barkley’s perspective might interpret this game as a microcosm for basketball talent over basketball analytics. Here’s as far as I’m willing to yield on that front: attempting 45 3’s in a single game, barring a historical performance or two, is absurd. Yes, many of those attempts came in the final minutes of the game, as Houston was trying to cut into the Clippers’ lead as it kept putting Jordan on the line, and yes, most nights a team as prolific from behind the arc as Houston won’t shoot 20 percent. But Harden was the most talented player on the floor, and his reluctance to drive into the lane and challenge Jordan kept him away from the foul line, where he is the NBA’s resident badass. It was a win for the Clippers to have Harden chucking contested 3’s, and Doc Rivers installed a defensive gameplan that constantly had 2.5 defenders within arms length of the Beard.

That’s my big complaint with Houston, organizationally — they are a team built on a mathematical concept and not on basketball chemistry; all too often, I feel as though Harden and his teammates were constructed in a laboratory and injected with anti-mid range jumper potions.

Golden State (6th, 31.1 percent of team’s total FGA) and Atlanta (4th, 31.4 percent) attempt a great deal of 3’s too, although they are nowhere near the 40.2 percent rate of Houston. But Golden State and Atlanta are tops in the league in 3P%, while Houston is league-average. While the Rockets, theoretically, have a good formula — take attempts from 18-21 feet that are worth two points and make them three-point attempts — it largely ignores a fundamental aspect of basketball: the good vibrations that come from earning the correct shot.

Great basketball teams have an awareness of where the best shot is on the floor, or as Mike Conley Jr. described so brilliantly in Jonathan Abrams’ recent piece, when certain guys need to get a touch. When Draymond Green passes up a spot-up three-pointer to get a teammate a driving layup, that does two things for the Warriors: (1) it gets the team an easier shot, and (2) it fires up that teammate, thus firing up the team. To Houston, there is no advantage to passing up the extra point; for Golden State, Atlanta and San Antonio — to name a few — it is equally a no-brainer to make the extra pass.

There is an apparent correlation between the great teams in the standings and organizations that have invested time and money into advanced stats and technology. When Barkley says analytics has nothing to do with their success, it his choice to ignore the developments of the modern game of basketball — the evolution of a sport that is growing domestically and internationally. Of course San Antonio didn’t defeat the Miami Heat in the NBA Finals solely because of analytics, but to say that research and data wasn’t a part of their process is ludicrous — it’s ignoring the facts.

If San Antonio was “just more talented” than Miami, why did they lose in 2013, Chuck? Don’t you think they made adjustments? What motivated those changes? Yes, Kawhi Leonard defending LeBron James and claiming the NBA Finals MVP was about talent, but it was also largely about player development. Leonard has transformed over the past few seasons into a competent shooter, and his 3-point range and improved vision have coupled nicely with his extraordinary defensive skill set.

But why did San Antonio insist on Leonard learning to shoot 3’s? Was it just a lucky guess? Did Leonard magically get better? Or did San Antonio use the information they have readily available to see into the future of the sport, to see that the modern game is about spacing, efficient shooting over created shots and playmakers in the pick-and-roll. We all know they have the latter in Tony Parker, but to compete in the West and for championships, they needed to overhaul their post-orineted teams of yesterday, and rebuild their team with position-less shooters. They invested in guys the league had given up on (Danny Green, Boris Diaw) and stocked their shelves with skilled two-way talents, mostly from overseas because, well, they’re the Spurs. This depth, another must-have for any team with serious aspirations in the modern game allows Tim Duncan, Manu Ginobili and Parker to pace themselves over the long season, and within every game. That’s how you get to June in today’s league.

None of that would matter, though, without Leonard. Because it isn’t about perfecting a formula, and it isn’t all about numbers. Talent is still the key and always has been. The Spurs recognized that as long as LeBron James is the world’s best player, the Larry O’ Brien Trophy would be going through him. That’s why the team traded their beloved backup point guard George Hill for Leonard at the 2011 NBA Draft, because they knew Leonard was the proto-type — he was the critical piece.

Only he wasn’t ready just yet. As they knew, Leonard could be the NBA’s best defensive player, but if he was a remedial shooter, opponents would use that against San Antonio just like what teams do to Tony Allen. Leonard would need a decent shooting stroke, at the least, in order to play starter’s minutes in a potential Finals against Miami. So the Spurs used their combined knowledge of basketball analytics and experience and made a proactive and beneficial player development decision.

My point? The best basketball teams — the best at anything — use everything at their disposal in order to win. It would be ridiculous if the Spurs, or the Warriors and Hawks, or the Rockets or Clippers, exclusively used analytics OR the eye test to make decisions. True NBA Finals contenders in today’s game use it all. This is likely why neither Houston or Los Angeles will make the Finals this season, and why last week’s masterpiece between Atlanta and Golden appeared to be a preview of what’s to come this June.

Now, if you excuse me, I have a date with a female girl I should be getting to.