NBA immortality is typically measured in rings. There are non-title teams that leave such a permanent mark on the sport, however, that their significance transcends counting championships.

As Matt Zemek and I have discussed throughout the month, most of the greatest teams are spearheaded by the sport’s greatest players — elite talent makes elite teams. There were no fewer elite players during the primes of Larry Bird and Magic Johnson or Michael Jordan, it was just next to impossible for anyone else to break through. Some did — the 1982-’83 76ers, the ’89 and ’90 Detroit Pistons, the ’94 and ’95 Houston Rockets — and others didn’t.

Today’s post is in honor of those great non-title teams left on the fringes. If the ball bounces differently in a game or two, these teams might have played their way off the list. Alas, we remember them for their accomplishments all the same.

31.67 PER. When we think back to the ’09 Cavs, we first remember the greatest statistical season by LeBron James, then a 24-year-old superhuman. Secondly we remember how pathetic “his help” was, and how the combination of such a lowly roster and LeBron’s prepubescence in the postseason sank a 66-win team before the NBA Finals.

As unconvincing as this supporting cast looks on paper, the dominance of the ’09 Cavs from October to May was extraordinary, enough to make you go back and revisit their efforts. Cleveland was third and fourth, respectively, in offensive and defensive efficiency. No team allowed fewer points per game.

Ben Wallace was past his prime but still a mighty presence on the glass. Mo Williams was the prototypical LeBron-point guard, averaging about 18 points and making an All-Star team.

Sure, names like Daniel Gibson, Wally Szczerbiak and Delonte West are uninspiring, but the ’09 Cavs were built around LeBron James, a do-it-all player the likes of which the league had never seen. This Cleveland team doubled-down on surrounding him with shooting (six Cavaliers shot at least 38 percent from deep) and defense, and up to the East Finals it paid off.

Until Miami won titles with its Big 3, there was a real argument to be made that surrounding LeBron with other superstars was counter-intuitive. Why would you take the ball out of his hands?

What happened against Orlando in the East Finals had far more to do with running into superior coaching than LeBron choking in the clutch or his supporting cast being a complete failure.

Stan Van Gundy stretched and pulled the Cleveland defense to its breaking point, as the Magic were +20 behind the arc on 40.8 percent shooting over six games. Dwight Howard and LeBron James largely canceled each other out, but even if LeBron could have done more (thought it’s hard to do much more than 38.5 points, 8.3 rebounds and 8 assists), Mike Brown was getting body slammed by Van Gundy at every turn.

Yes, in hindsight Cleveland needed more ball creation, and a defense that had confounded teams during the regular season was no match for the high-octane perimeter shooting from Orlando. Brown didn’t have the greatest tools to build a champion, but as far as non-title teams go, there might not be a greater player than ’09 LeBron James. Brown’s inability to maximize these rosters against playoff competition went a long way toward LeBron fleeing for Pat Riley and Erik Spoelstra in Miami.

Tom Thibodeau will likely return to the NBA next season, and with each passing season at his new destination, we’ll think we know more about why it never worked in Chicago.

However, we do know what happened in Chicago. Thibs awakened the carnal instincts of a previously middling Bulls franchise. He built his offense around third-year point guard Derrick Rose, who became the youngest MVP in league history after leading the Bulls in scoring. Thibs won Coach of the Year for lifting the team to 62 wins.

The game’s best defensive team, Chicago outpaced the freshly assembled Big 3 in Miami to claim the top seed in the East. The two teams collided in the East Finals, as expected, and the Bulls ran away with Game 1.

The Heat reached back and found an extra gear, however, one that the Bulls didn’t quite have in their arsenal. Miami won four straight games to advance to the 2011 NBA Finals — a series, as Matt and I have written about, the Heat weren’t ready for themselves.

When we think back to the 2011 East Finals, we remember LeBron James clamping down on Rose in the fourth quarter. However, we forget that Game 4 went to overtime, and we lose sight of how close Game 5 was. The Bulls may have gone down in five games, but they would be back, we imagined, and so the best rivalry in the league was born.

Except it never got that good again. In a lockout-shortened season, the Bulls yet again won the East in 2012, but Rose infamously injured his knee in Game 1 of the first round, and the Bulls failed to advance with their offense in complete disarray.

Rose couldn’t begin and end the following two seasons, and while the former MVP did open and close Chicago’s 50-win campaign this past season, he also missed 31 games and was noticeably flat all year.

Chicago drew Cleveland in the second round, and the Bulls went up 2-1. “Here it is,” some of us thought. “The Rose vs. LeBron rematch we’ve been waiting for.”

The Cavaliers were simply too much for the Bulls, though. After a pair of single-digit losses in Games 4 and 5, the Bulls went quietly into the night in a Game 6 blowout.

In a move you could see coming from a mile away, Thibs was fired after the season. Now it’s Fred Hoiberg’s turn to see how much he can squeeze out of this roster. Perhaps there will be sizable turnover over the next year or two, and the Bulls will start over by building around Jimmy Butler and Nikola Mirotić.

The Thibs era in Chicago was incredible… and sad and ugly and captivating. It’s too bad we never got to see what that nucleus could really do. They were the pesky younger brother LeBron never wanted. 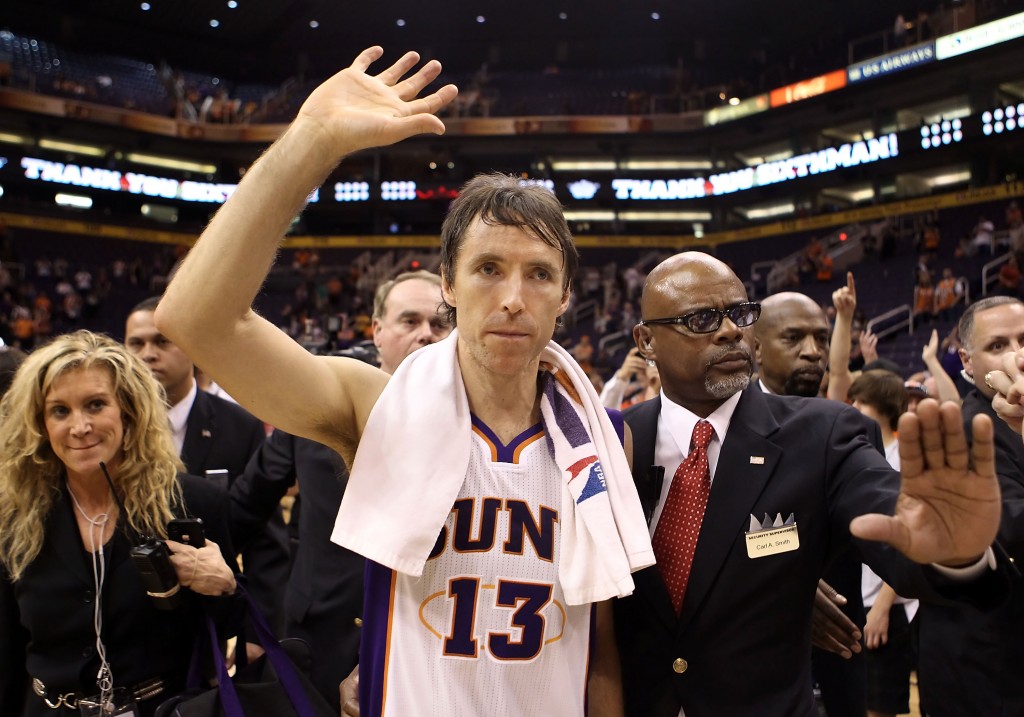 Plenty has been written about one of the most fun teams in NBA history. We’ll be talking about them for years and years to come. Just look at this 3-year run:

2004-’05: The first full season under Mike D’Antoni. The Suns acquire Steve Nash, who wins MVP. They win 62 games, the top mark in the West, and D’Antoni wins COY. However, Phoenix loses in the West Finals to the eventual champion Spurs.

The Suns also charged to the 2010 West Finals, nearly disrupting the Lakers’ back-to-back titles, in what was Steve Nash’s last title try with Phoenix. 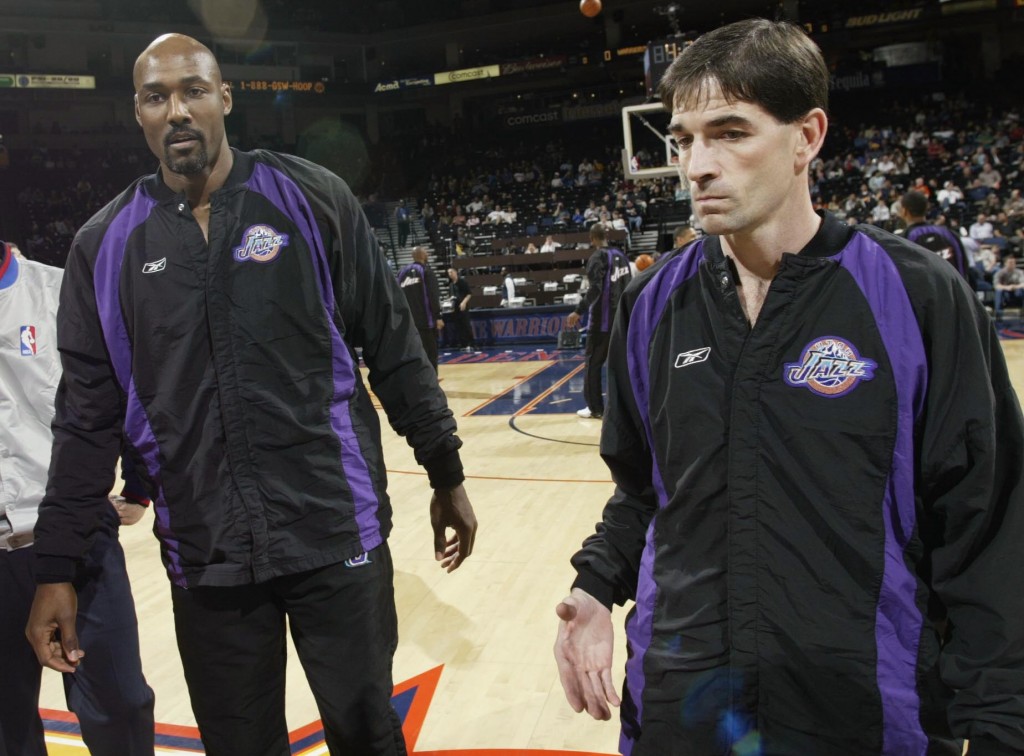 Because Karl Malone and John Stockton were both Dream Teamers, because their most notable foe was Michael Jordan, and because of Jordan’s closing dagger in the 1998 Finals, the Utah Jazz are typically the first team brought up in this discussion.

Malone, Stockton and Jerry Sloan are one of the sport’s great trios. For years before and after this back-to-back Finals against the Bulls, these Jazz teams piled up points and victories.

In 1996-’97, the Jazz, behind a 64-18 record, won the West by seven games. They advanced past the Lakers and Rockets. In the Finals, they lost three single-digit-margin games — including the Flu Game — and took the Bulls to six.

Utah won 62 games and the West in 1997-’98. The Jazz nearly took a 2-0 lead over the Bulls in the Finals, and the last three games were decided by single digits, but the Bulls yet again closed things out in six.

These Jazz teams were great, and if Malone and Stockton’s primes were five years later, it’s certainly possible the Lakers and Spurs would have less to celebrate. But let’s move our attention to a truly forgotten team — literally, they no longer exist: the Seattle SuperSonics.

These teams during the 1990s were insane.

In the ’93 playoffs, Seattle crashed the West Finals by defeating the Jazz and Rockets. The Sonics pushed the post-Dream Team Charles Barkley-era Suns to seven games.

Seattle won 63 games in ’94 and won the West. Back then, the NBA played 5-game series in round one because (…?). The No. 8 seed Nuggets upset the Sonics behind a pair of OT victories in Games 4 and 5. If this was a 7-game series, even down 3-2, the Sonics would likely have charged back.

The ’95 Sonics were one of the greatest scoring teams of all-time. Payton, Schrempf and Kemp combined for 58.5 points per game, and all three made All-NBA teams. Again, though, the 5-game series let the Sonics down, this time to an overachieving Lakers team. L.A. defeated Seattle by a combined 10 points in Games 2-4, and just like that the Sonics’ best chance at a title slipped away.

The following season is remembered for the Bulls’ 72-win campaign and championship, and rightfully so. However, Seattle once again was the class of the West during the regular season, winning 64 games and beating the Rockets and Jazz in the conference playoffs. The Sonics pushed the Bulls to six games after starting down 3-0.

Seattle would never get back to the Finals again with its core. In Kemp’s final year with the team in ’97, the Sonics won 57 games, but they fell to the Rockets in the second round. The following season, Seattle won 61 games but lost to Shaquille O’Neal and the Lakers in round two.

Perhaps we’d remember how close the Sonics got to a title if they were still around. We should remember them, nonetheless, as one of the great two-way teams in basketball history, and a definite precursor to the modern era of pace-and-space.

Oh, and we can’t forget those beautiful jerseys.