To most normal people, December 15th is extraordinarily regular. For most, it’s probably a day a to get in some Christmas shopping before the eleventh hour approaches. For daydreaming NBA fans though, December 15th – the day after which contracts signed in the summer can be traded – represents the loosening of the straight-jacket wrapped around ESPN’s most ingenious creation since Monday Night Football: the NBA Trade Machine.

Over the last couple days, you’ve probably put your GM skills to the test, trying to work a deal that lands your favorite team that missing piece you think can put it over the top. Well, guess what: that trade you concocted, that works financially but is a far-off fantasy in real life, isn’t going to happen. But that’s okay! Things aren’t supposed to make sense on the Trade Machine:

That said, let’s get realistic for a just a few minutes and dive into a few potential trades that at least make a little bit of sense for each of the teams involved. Here are three trades that should happen, but probably won’t. 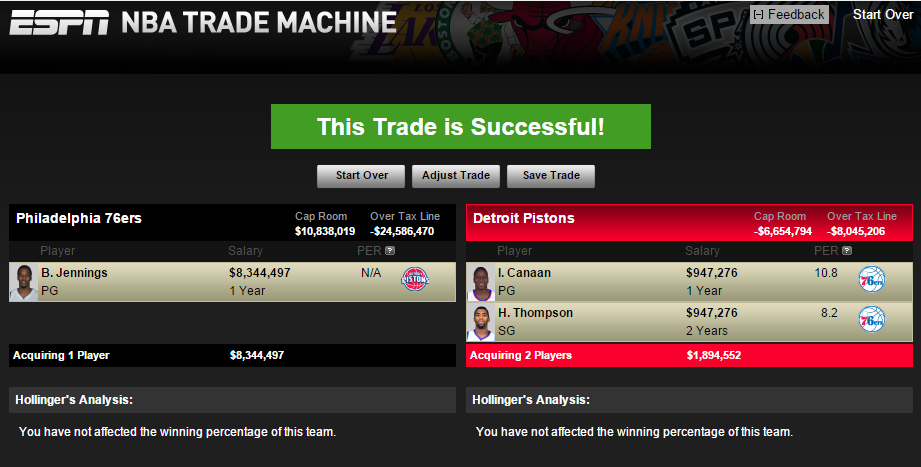 When Brandon Jennings tore his Achilles in the middle of last season, it was a massive bummer. Following the release of Josh Smith, Jennings exploded to lead the Pistons back to respectability after a disastrous start. Soon after he went down, he lost his starting gig; Reggie Jackson was picked up from Oklahoma City and has been fantastic as Detroit’s go-to guy since. Jennings is getting set to return though. According to reports, he could start a rehab stint in the D-League as early as Saturday. Jennings has claimed that he’s cool with contributing off the bench when he returns – and given the nature of his injury, that might be all he’s capable of. But what if he was given the opportunity to re-prove himself as the main man on a different team?

It probably doesn’t follow the Sixers’ goal of being horrendous this year, but adding Jennings to capably run Brett Brown’s offense would be a smart move for the development of the franchise. Having a player like Jennings to work as a pick-and-roll partner for Nerlens Noel and reliably deliver post-entry passes to Jahlil Okafor would foster development in the Sixers future franchise cornerstones. Canaan and Thompson are probably fine NBA rotation players, but they’re not long-haul guys. And it’s not as if having Jennings on Philadelphia would suddenly turn it into a playoff team. The Sixers would probably be more competitive, but would still lack the punch to move them out of contention for the first-overall pick they so desperately covet.

For Detroit, the benefits of the deal are simple: it adds a pair of three point shooters who should seamlessly integrate into Stan Van Gundy’s four-out system, and also beef up the league’s lowest scoring bench unit (23.1 PPG). Jennings may be a boon to the second unit upon his return, but the nature of Achilles tear means that is no sure thing. Instead, Canaan is a slightly more dependable back-up point guard. And it won’t take much for him to outperform the putrid performance of the Steve Blake-Spencer Dinwiddie platoon backing up Jackson this season. They’ve combined to shoot 30 percent from three, and both sport PER scores under 9. It’s a modest move for Detroit, but one that could bring in the added depth that could push the team towards a low playoff seed.

Pelicans trade Ryan Anderson to Jazz for Tibor Pleiss, Chris Johnson, a 2016 first-rounder and a 2017 second-rounder 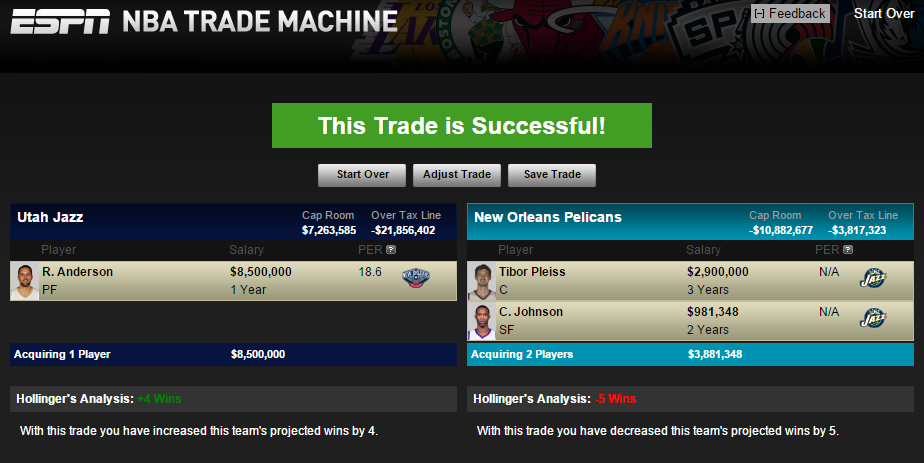 Utah kills teams with its immense size. Rudy Gobert and Derrick Favors form a towering duo up front that, when paired up with a perimeter unit of Gordan Hayward, Rodney Hood and Alec Burks forms the team’s most powerful high-usage line-up. But versatility is lacking with this team. It’s almost exclusively a go big or go home situation for Quin Snyder because his roster lacks three-point shooting and a traditional stretch four.

It just so happens that New Orleans’ Ryan Anderson appears to be available. And the Jazz, a team’s that maintained plenty of cap wiggle room, should try to land him before the injury to Gobert derails what was looking like a playoff-bound season. The Pelicans (7-18) are awkwardly built. It’s becoming ever more clear that even with an improving health situation, this isn’t a good enough supporting cast for Anthony Davis. Optimizing their chances of nailing down a high pick to pair with Davis should be the goal – and dealing Anderson, a pending free agent, is step one.

In this proposed trade, the Jazz bid adieu to a pair of sparsely-used parts from the end of the bench in Tibor Pleiss and Chris Johnson along with a pair of picks (including this year’s first rounder), but inject a laser-accurate shooter to their monotonous front court collection. Anderson on the Jazz would provide a boost to the starting unit in the short term. Upon the return of Gobert in January, Anderson would assume the role of assassin of the bench, and will be able to offer the Jazz a different look from their twin towers configuration when certain match-ups demand it.

On New Orleans’ side, they add a pair of deep rotation players, who will fit in splendidly with the Pelicans’ collection of … other deep rotation players. It’s the first-rounder that really matters to New Orleans in this trade. The team hasn’t used a first-round pick of its own since Anthony Davis was taken in 2012, which is part of the reason for the roster’s ugly complexion right now. With two first-rounders in 2016, both likely in the top-20, the Pels can start to construct the kind of team a transcendent star like Davis deserves. 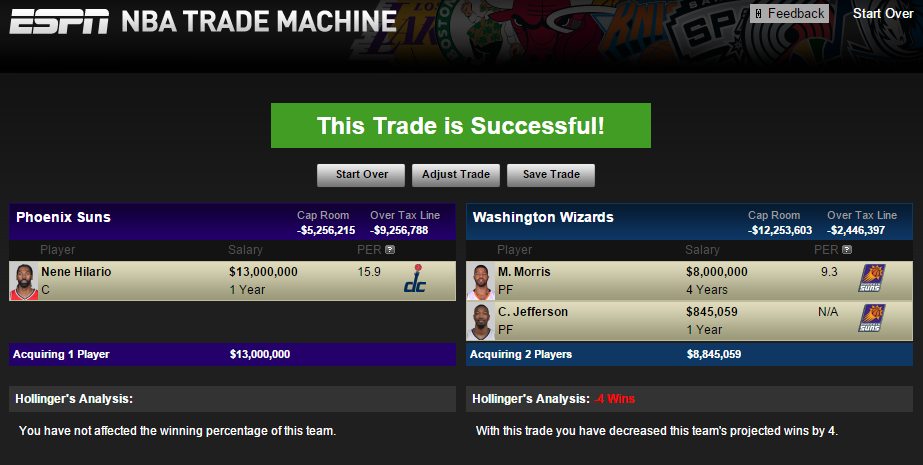 That’s probably close to how the conversation between Suns GM Ryan McDonough and Wizards boss Ernie Grunfeld would go in relation to a Markieff Morris for Nene trade.

This would be an incredibly high-risk move for the Wizards. Morris’ play this season has been indefensible. He’s not shooting well, yet has forced shots on the regular while clearly souring on the idea of playing for the Suns. Things have gotten so ugly that he’s started to accrue DNP-CDs along with numerous games of next to no playing time. And he has a whopping four years remaining on his contract.

The hope if you’re the Wizards in this hypothetical situation is that Morris’ poor play is tied to his disdain for the Suns franchise, and not the result of a significant decline in his skill level – which seems reasonable to assume. Washington has tried to move to a more up-tempo style of play this season with disheartening results. Morris has never been a superb three-point shooter, but he would open the floor up enough to create space for John Wall to initiate the offense with his drives. If he can be a sturdy third offensive option to help ease the immense burden on Wall and the oft-injured Bradley Beal, that $8 million annual price tag could start to look like the steal it was during Morris’ career season in 2014-15.

With Nene, the Suns get someone who will probably get lost in the shuffle behind Alex Len and Tyson Chandler, but could figure into some line-ups when Jeff Hornacek needs to go big. The Warriors, for example, ran the Suns off the floor Wednesday night, but as the Jazz and Bucks have shown this season, a gigantic front court can help slow the Warriors’ small ball dominance. A Nene-Chandler front court would still probably fall to the Golden State machine, but it might help keep Steph Curry and his starting pals on the court into the fourth quarter. More importantly to the Suns though, Nene would bring an element of flexibility to the roster that just doesn’t exist with Morris’ long-term deal. Nene’s $13 million salary comes off the books after this season, meaning Phoenix can either let him walk and welcome a fresh chunk of cap space, or perhaps even try flipping him again before the deadline to the big-needy team in search of a rental.

The love affair between Morris and the Suns has run its course, while trade rumors have circulated Nene for eons. A fresh start for both might be a welcome development for both the players, and their new teams.