Let me start by saying Tim Duncan has been my favorite basketball player since I was flipping through Sports Illustrated Kids magazine each month as a boy. A life size poster of Timmy presides over my bed at my parent’s house, his simple expression and broad shoulders guarding my bedroom like a heavy-set bouncer at a Manhattan hookah bar. He’s been my favorite player for a number of reasons, but sitting atop the list is that his excellence is so subtle; the process of falling in love with Duncan’s game, for me was the process of falling in love with basketball itself. As San Antonio has evolved since the late-90s, winning championships 15 years apart, Duncan has remained the centerpiece for the Spurs on both ends, posting numbers at age 38 that shouldn’t be plausible — and yet, for Duncan, are routine.

So it’s with the greatest admiration and respect for Duncan that I admit I find the push for him to win the 2015 Defensive Player of the Year award mostly ridiculous, if not a tad bit insulting. Yes, Duncan has never won DPOY, even though he is unquestionably one of the greatest defensive players of all-time, and perhaps the best two-way player of his generation. But anyone with the capacity to adore Duncan knows well that individual awards and recognition function as an antithesis to his entire career; he’s a man whose nickname is “The Big Fundamental,” a man who barely speaks above a gentle murmur in interviews, and a man, by all indication, who will never reveal just how personable, hilarious and interesting he actually is to the masses — just because he doesn’t care to.

Duncan is a two-time MVP and a three-time Finals MVP; he’s a first-team All-NBA selection 10 times over, and an 8-time first-team All-Defender. (This is in addition to numerous second- and third-team All-NBA and All-Defense finishes, the 1998 Rookie of the Year and 15 All-Star selections.) To posit Duncan needs any more individual recognitions to validate his impact on the game of basketball is off-base; while I believe Darryl Howerton comes from an earnest place in his recent piece, there’s no need to frame this season’s DPOY race as the chance to right a wrong.

Instead, we should treat DPOY the way we always treat it, and the best candidate for the award should win. Duncan could win the award, in his 18th season (!!!), by pure merit alone. There is no shortage, however, of qualified candidates for DPOY, and I believe that Duncan will ultimately fall short. First, why don’t we organize why Duncan should win. 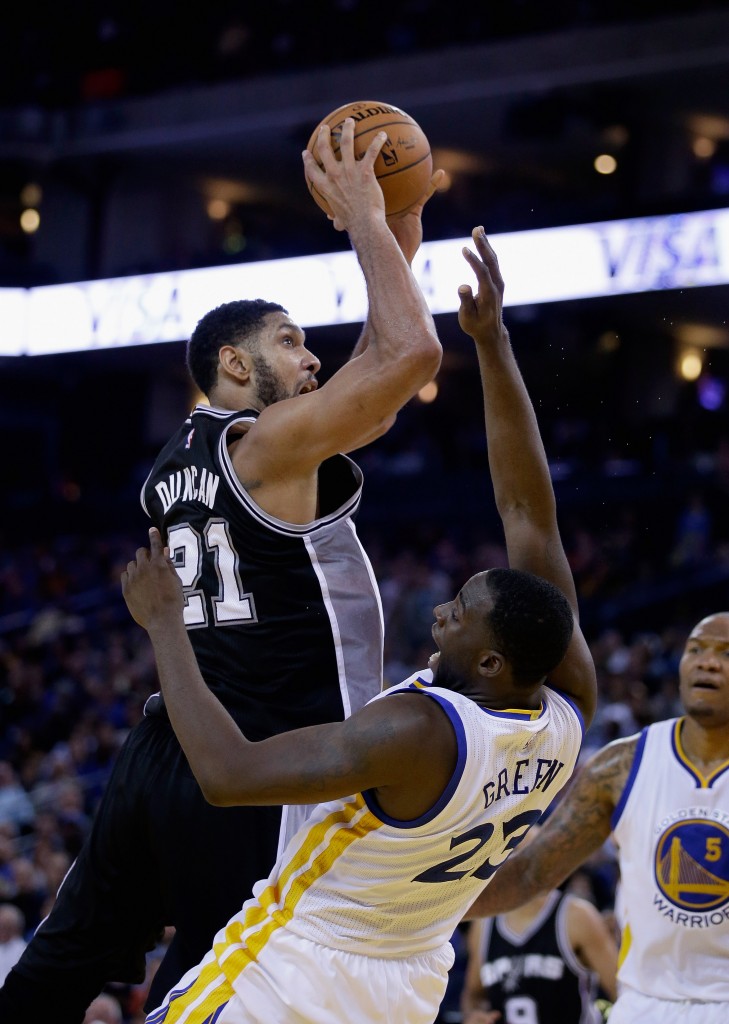 The Spurs had a losing record in December for the first time during the Tim Duncan era. As we have seen with their resurgence after the All-Star break, the struggles were tied to a string of injuries to Tony Parker, Tiago Splitter and most importantly, Kawhi Leonard. Since the band got back together the Spurs have been rolling. But the difference between climbing out of the No. 6 spot in the West and scratching and clawing to stay in the playoff picture at all (See: Oklahoma City Thunder) is critical to San Antonio’s title aspirations. The Spurs will likely square off against Memphis or Portland, two teams it knows it can take down, in the first round — and not Golden State.

Duncan played 34.5 minutes per game in December, way more than Gregg Popovich would prefer playing San Antonio’s all-time leading scorer, but a necessary move without Leonard and Splitter on the defensive end. The Spurs allowed 104 points per 100 possessions in December, a below-average mark, but you have to wonder how much higher that number would be if Duncan wasn’t out there.

On the season, Duncan is one of five players averaging 13 points, nine rebounds, 1.5 blocks, and has appeared in 65 or more games. He’s having a very comparable year to Derrick Favors, a 23-year old rising star, and only the Gasol brothers can match his counting stats and win share tallies. The Spurs have a 99.5 defensive rating when Duncan is on the floor, and while that number has fallen a bit after the All-Star break, the Spurs are outscoring opponents by 12 points per 100 possessions over the last 20 games with Duncan. Basketball Reference has Duncan sixth among all players with 4.0 defensive win shares, 11th in win shares per 48 minutes, and fourth in defensive box plus/minus (ahead of Draymond Green and Anthony Davis).

That Duncan is still an elite shot-blocking and rebounding power forward in today’s game is spellbinding. Making the All-Star and All-NBA team, at his age, and at that position, should not be possible and yet he will likely do just that, again. He’s one of the most important pieces on a legitimate title threat, the two-time defending Western champions and all of that is worthy of praise. But the notion that we, as a basketball community, have to give the award to Duncan as a legacy vote is undermining the fantastic work by a handful of other elite defenders — namely Anthony Davis, DeAndre Jordan, Kawhi Leonard, and Draymond Green. 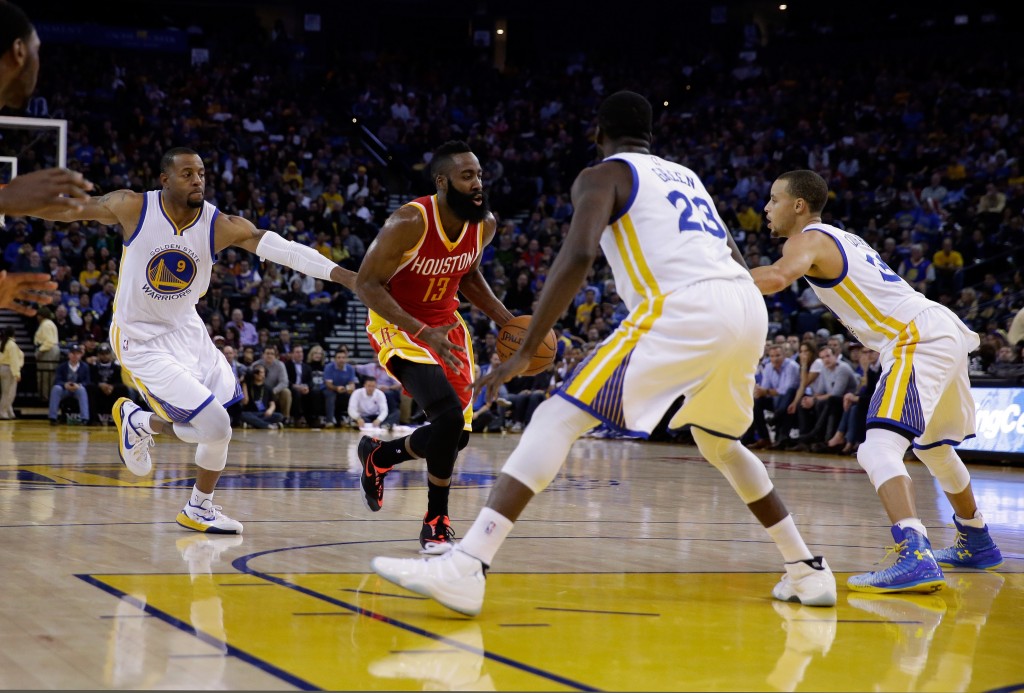 I’m not the first person to suggest that we are taking Golden State’s elite regular season for granted, but allow me to reiterate how freaking impressive their 60-13 start has been. Even if you give the Clippers the nod in their virtual tie for first-place in offensive efficiency (109.6 points per 100 possessions), Golden State has been at the top of both offensive and defensive metrics all season. The Warriors are far and away the best defensive team per possession in the NBA, with a 97.4 rating that makes the Bucks (No. 2, 99.6 defensive rating) closer to 11th-place than first.

Mark Jackson rightfully got a great deal of credit for transforming the Warriors into a team that gave a damn on the defensive end. But more impressive to me is what Steve Kerr has done in one season as the team’s head coach, tinkering with the rotation — as well as adding Shaun Livingston — to create one of the greatest defenses in modern basketball history. This is what makes Kerr the Coach of the Year in my opinion. More to the point, this is what makes Draymond Green my Defensive Player of the Year.

Where do you start with his “candidacy.” Well, Golden State’s starting lineup has a defensive rating of 94.4, and is outscoring opponents by 19.7 points per 100 possessions — which is why most Warriors games are over in the third quarter. I’m assuming here, but I imagine Kerr took notice of this eye-popper from last season: over 105 minutes last season, Curry/Thompson/Iggy/Green/Lee eradicated their opponents by 34.2 points. Small sample size or not, that is ridiculous, and Kerr likely had this type of unit in mind — Green at power forward, Andrew Bogut in place of David Lee, Harrison Barnes and Andre Iguodala rotating in and out — when he crafted their new starting lineup.

As we watch another Michigan State team rumble to the Final Four, Green — the Sparty alum — has evolved into one of the best two-way players in basketball just three years removed from being “Magic Johnson light” for Tom Izzo’s Spartans. He’s always been positionally ambiguous; his versatility at (maybe) 6’6″ to stay with guards, bump big men, and equally damage the opposing team on the perimeter or from the paint is unique to him. Green is playing power forward for Golden State — if you have to attach a label to it — but what he really is doing is freeing up his teammates to play to their strengths. He’ll just fit in where the team needs him and this is why Golden State has dominated a supposedly impossible West. They can matchup against anybody because their roster is designed to be spontaneous and versatile.

If the best anti-Green argument is that he is the only great defender on his team — these detractors are likely also giving COY to Mike Budenholzer and MVP to James Harden — then I would beg them to consider just how difficult it is to be great in the NBA. I believe Curry is the MVP because he elevates Golden State from good to the best team in the NBA, and same for substituting Jackson with Kerr. If DPOY ends up with Jordan, the best defensive player on an average unit, or with Davis or Serge Ibaka, the best players on seriously flawed defensive teams, that is discarding how unbelievable Golden State has become at restricting opposing teams to bad shots and limited options. Remember, there isn’t another team defense that comes close.

And at the heart of that is Green, who is holding opponents to 46.1 percent shooting at the rim AND is tops in defensive win shares. It would be silly to pass over Green, the best defensive player on the best defensive team, to give a lesser deserving candidate a lifetime achievement award — even if it is Tim Duncan. 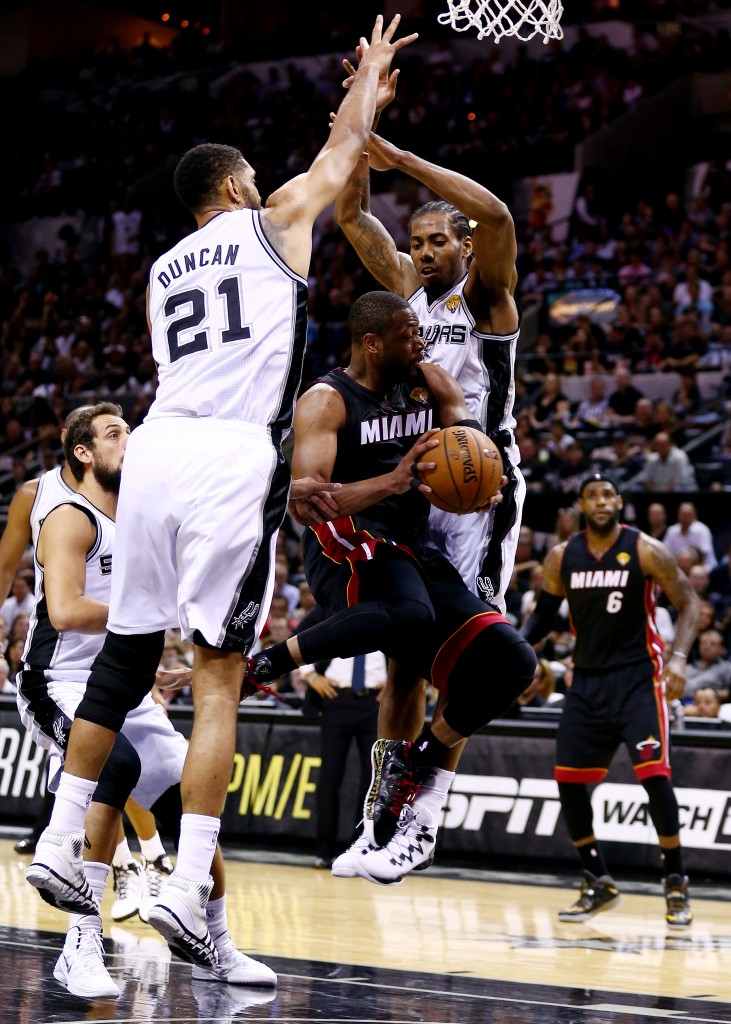 The other interesting wrinkle here is Leonard, who Zach Lowe recently suggested to J.J. Redick is coming on strong for DPOY, and for good reason. I wrote a lot about Leonard last week, as the Spurs are back to 2013/2014 earth-scorching levels of play with him on the floor. He’s having the greatest offensive stretch of his career, but he’s more important on the defensive end where Leonard is leading the NBA in steals and locking down dudes with The Claws. When he’s on the floor, the Spurs are Warriors-like, holding opponents to 97.8 points per 100 possessions.

In short, Leonard shouldn’t win DPOY for a season in which he has missed so much time, especially when Green is personifying the very fabric of what makes Golden State the NBA’s best team. I do think Leonard is on the short list of contenders, and in a world where Green was only good, not great, per individual defensive metrics — may we NEVER live in that world — I think Leonard would have a strong say in the race.

And that’s the final nail in the coffin to Duncan’s chances, for me. San Antonio has jumped up to No. 3 in defensive efficiency (99.0), a gigantic leap from the defensive production the team was putting out in late 2014 and early 2015 — and that leap is about Leonard more than Duncan. In a race this tight between Green, Jordan (who I haven’t spent much time talking about, but who has been really impressive, to say the least) and Duncan, the fact that Duncan is not the most important defensive player on his own team tanks his campaign. This is Green’s award to win.