The Boston Celtics’ improbable playoff run came to an abrupt conclusion on Sunday afternoon. The Cleveland Cavaliers defeated the Celtics, 101-93, on their home floor, completing the series sweep many had predicted.

I didn’t think the Cavaliers would sweep the Celtics. Maybe that was a product of being too close to the action. I wouldn’t call myself a Celtic fan, but I am a Boston-suburb lifer. It’s the home team, even if it isn’t my home team.

I saw this squad play a lot of good, team basketball during the season. I watched the Celtics win six straight games at the end of the season in order to secure a playoff spot. What they accomplished after the trade deadline was not a fluke; Brad Stevens had his team playing playoff-caliber basketball for the last few months of the season. That intensity, defined by an “every game counts” mentality (along with a weak conference, of course), was going to be the main reason Boston would sneak into the playoffs, and the team pulled it off.

I didn’t expect a series upset, but I thought the Celtics’ grit and determination over the last few months would have been enough to win them a couple games at home. It was close more than it wasn’t, but they just didn’t have the firepower to close out any of those games.

Some background before revealing Grande’s nugget: In 2008, the (would-be champion) Boston Celtics (1) defeated the Atlanta Hawks (8) in their opening-round series. The narrative going into that series wasn’t too dissimilar to the one going into this year’s series between Cleveland and Boston. Everyone expected a Celtic sweep in 2008, just as everyone expected a Cavalier sweep in 2015. I distinctly remember how nervous the city of Boston was in that seventh game. That was their year, and the Hawks were about to spoil it. It was as close as you can get to an upset without the upset.

The interesting statistic Grande noted was that this year’s Celtics – Cavaliers series had a smaller point differential than the Celtics’ seven-game series against the Hawks in 2008, and that series went seven games. The point being, a series can be quite close and still result in a sweep. At no point did I think Boston had quit. They kept punching back until the bitter end.

The Celtics had rebounding issues throughout this series. That was predictable. They never had anyone to match up with Timofey Mozgov, Kevin Love, and LeBron James on the glass. They knew that going in.

What surprised me was how poorly the Celtics’ guards shot the ball. That was a strength of this team for most of the season. The Isaiah Thomas, Avery Bradley, Marcus Smart, Evan Turner rotation was working until this series, and I can’t really pinpoint where the credit or blame for that lies. Nerves? Cleveland’s defense? An inevitable cold streak? Some combination of all three seems logical.

Marcus Smart played well considering his rookie status. Aside from his oversleeping incident, Danny Ainge and Brad Stevens have to be proud of how Smart handled himself in the postseason. 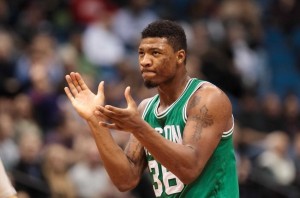 Thomas, Turner, and Bradley all shot well below their season average field goal percentages, and for a team starved for offense, you can’t have all of your top offensive weapons slumping at the same time.

You can give Cleveland’s defense some amount of credit for that, but Kyrie Irving, J.R. Smith, Iman Shumpert, and Matthew Dellavedova isn’t what I would consider a strong defensive backcourt. Shumpert is a very good defender, but Irving, Smith, and Dellavedova shouldn’t be able to neutralize the Celtics guards as they did.

This is where the Celtics’ lack of a post threat hurts, because Mozgov was able to play goalie for most of the series, allowing Cavalier guards to play aggressive defense on Boston’s jump shooters, knowing they had help if they were beaten off the dribble. Cleveland exposed all of Boston’s weaknesses, and in a twisted way, that exposure made the Celtics’ ability to keep this series close even more impressive. This was an extremely flawed basketball team.

Where does Danny Ainge go from here? That is the question.

The Celtics maxed out what this roster could accomplish. You can’t squeeze more out of these players than what Brad Stevens got out of them this season.

The Celtics find themselves in an awkward and fairly unique position. They can’t really bottom out again. The Eastern Conference is just too weak, and after getting a taste of the playoffs this season, I can’t imagine Stevens would be happy about landing in the lottery again next year. Yet, the Celtics are so far away from contending that I wouldn’t rule anything out. They aren’t just one star away; they are multiple stars away, with only one potential star, Marcus Smart, on the roster.

The value of their “young talent” is a bit overstated. Isaiah Thomas and Avery Bradley are good players, but we know who they are, and we have a pretty good idea of what they are going to be. The same could be said about Jae Crowder if he is brought back next season. James Young is a complete wild card. Jared Sullinger and Kelly Olynyk have their fair share of appealing NBA skill sets, but they aren’t going to develop into the stars the Celtics need. This is a team comprised of fantastic role players. Ainge is building the Celtics backwards in a lot of ways. That doesn’t mean it won’t work out, but it’s certainly a new take on how to rebuild.

They have an outrageous number of future draft picks. If Ainge is going to build himself a contender in the near future, you can bet it’ll be on the back of his draft assets.

The only indication of what direction the Celtics could be moving in was this report by Steve Kyler of Basketball Insiders, which stated that the Celtics are offering one of their many future first-round draft picks to any team willing to take on Gerald Wallace and his massive $10 million contract. Someone find Sam Hinkie.

If Ainge can rid his salary cap of Wallace, than you can bet something else will come soon after. This is a strong upcoming free agent class. Whether or not Boston can attract one of the top free agents remains to be seen, but Danny Ainge is certainly going to try.

Tony Xypteras writes about basketball on the Internet. You can find him there. @TonyXypteras