Being a high school saxophone player in the Bay Area, I pretty much grew up with Tower of Power. One of the group’s more memorable album covers, shown in the cover image above, is also the immediate headline after Game 6 of the Western Conference Finals:

I’m not going to pretend I was the first one to think of this next statement. Here’s the tweet that started the conversation in my head:

This is me, not Lacob: I think this was probably the greatest game in Warriors franchise history.

This is not a universal opinion, but I’m going to call myself an expert on the subject, and I’m with Kawakami, the columnist for the San Jose Mercury News.

I wrote a three-part series last year on the 1975 Golden State team, so I know those Warriors didn’t have a win like this. Besides, the stakes were never this high for them. They weren’t expected to beat Chicago or Washington, and if at any point they had been eliminated, their fans would have still considered it a job well done. The 1976 team, which improved upon the championship team in every measure of regular season performance, led 3-2 against the Phoenix Suns and lost Games 6 and 7, the last one at home. No game from the 1970s deserves serious consideration as the greatest win in Warrior history.

I’m not going to pretend to know about the Philadelphia days, but I can say that Wilt Chamberlain’s 100-point game in 1962, while deserving of its place in franchise and league lore, doesn’t come close to what this team did Saturday night. That was a night for one man. This Saturday night in Oklahoma City belonged to a team.

The Golden State Warriors are back from… well… if not the dead, certainly the lifeless.

Games 3 and 4 had Warrior fans using the old Butch Cassidy and the Sundance Kid line: “Who are those guys?”

Game 5’s theme was, “I remember these guys.”

After Game 6, every Warrior fan was shouting, “I LOVE THESE GUYS!”

These guys showed up just in time to save the Warriors’ season.

The Oklahoma City Thunder learned what Memphis and Cleveland learned last year. With the Warriors, down is not out. 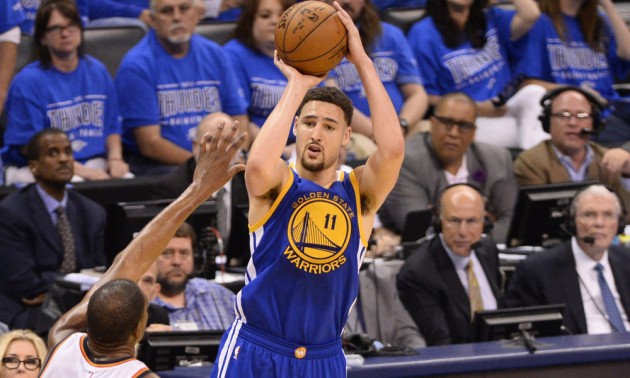 Not only did Golden State draw from its championship experience; I have no doubt that the dozens of important and close games the Dubs played this season played a big role in the Game 6 victory in Loud City.

The Warriors started the season winning 24 games in a row, and while many of them were blowouts, they certainly weren’t all like that. They learned to win with good 3-point shooting and without it; at fast or slow tempos; against good and bad opponents. To tell the truth, sometimes the bad opponents gave them tougher games, because their players played above the scouting report.

The Warriors got everybody’s best game almost every night. Every team wanted to be the one to break the opening-season streak, or the home winning streak, or damage their chances at 73 wins. No team rested their stars against the Warriors the entire year. Through it all, they learned to trust the process — run the offense, play good defense, trust each other — even on the rare occasions when they lost. That’s why they didn’t lose back-to-back games (something never before accomplished in the history of the NBA in a regular season) until last week in Oklahoma City.

Game 6 was a textbook example of process, on both sides. The Warriors stayed with it. Draymond Green was asked if he ever thought they were in trouble:

“No, because even when shots weren’t really falling for us. They get a bounce here and there, when we’ve defended. We’re still right there. Every time something went wrong. We were still right there. So there was never a moment where I said, ‘This ain’t our night.’ I always felt like, this game right here for us to take.”

That’s a great example of trusting the process. I also want to mention Stephen Curry’s drive-and-kick pass to a spotted-up Harrison Barnes with the Warriors down seven with almost seven minutes to play. Barnes’s outside shooting has been really spotty this whole season, and while he’s been better (percentage-wise) in the playoffs, I don’t think that — given the stakes and all the factors involved — too many point guards would have thrown that pass.

Feed your open teammate. Trust the process, understanding that it doesn’t always work, but it gives you your best chance to win.

Not coincidentally, Game 6 marked the first extended successful run of the Warriors’ “Death Lineup,” which you’ve been hearing about all year.

Btw: The Death Lineup finally came thru for the Warriors in the biggest moment of the series. Finishing the game 21-10 in last 6:33 of game

Steve Kerr also trusted the process. He stayed very close to his regular season rotations until it became obvious that his stars would need to log big minutes. He went small at the end, even though the Thunder had Steven Adams on the floor, because he trusted this unit that had made so many teams cave in to pressure throughout the course of the season. The Death Lineup’s complete failure to achieve that result in Games 3 and 4 didn’t shake his faith in the process.

Now to the opposite side of the “trust the process” concept.

The Thunder, with apologies to Dennis Green, are who we thought they were. At least, that’s who they were in the last six minutes of Game 6.

From Warriors broadcaster Tim Roye, in his call of Game 6:

“This doesn’t look good. Warriors trail by seven, with just 5:48 left and Steven Adams at the line with a chance to make it eight. Warriors are in the bonus, and Oklahoma City doesn’t have a foul yet.”

For a much more detailed account of what happened next, do yourself a favor and read this great piece from Ethan Strauss of ESPN.

The Thunder turned the ball over six times in the last six minutes of Game 6. All of those turnovers were charged to Kevin Durant or Russell Westbrook. The Thunder had no assists in the entire fourth quarter.

The Thunder’s dynamic duo of Durant and Westbrook went back to dominating the ball, a practice they had abandoned in beating San Antonio and grabbing a 3-1 lead in this series. When the pressure was on, they reverted to form. Durant and Westbrook were 3-for-14 in the fourth quarter, and the rest of the team was 2-for-5. Dion Waiters played almost 11 minutes in the fourth quarter, and took one (1) shot. When you see highlights of the quarter, you’ll see him perched wide open at the three-point line. They never threw him the ball. This is a guy who hit three big 3-pointers in the Game 1 win which gave Oklahoma City a chance to end this series on Saturday.

This the kind of dysfunction that led experts (and pretend experts like me) to give the Thunder no shot to beat San Antonio, much less push the defending champions to the brink of elimination. Billy Donovan has to get Durant and Westbrook to do what seems to be obvious, but must be very difficult: trust their teammates when the pressure is on. 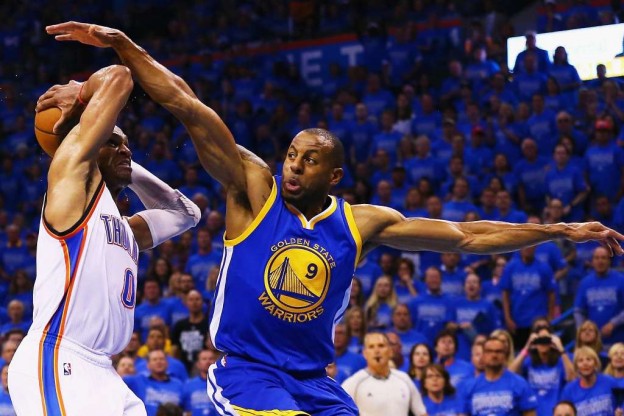 In my Game 6 preview, I mentioned five keys to victory for the Warriors. One was that they needed to not hunt 3-point shots, but to take them when they came in the flow of the offense. I think I nailed this, as long as you consider that when Klay Thompson is shooting like he was last night, he creates his own flow in the offense.

My specific point was that the Warriors needed to shoot a healthy percentage on their threes, because when they missed them in Games 3 and 4, they often led to dunks in transition that really got the crowd going. As long as shooters had established a rhythm, they deserved the green light. Klay didn’t shoot shots in the attempt to create momentum; he shot because he knew he already owned momentum. That enables me to say the Warriors checked this box in my five game keys.

My focus before this game had a lot to do with the OKC crowd. My No. 1 key was for the Warriors to get off to a good start, entirely for the effect it had on the crowd when the Thunder got out to double-digit leads in Games 3 and 4.

The Warriors did get off to a good start, but not in any obvious sense.

They actually trailed by more points (six) at the end of the first quarter than in Games 3 and 4. However — this is the key point — they had not fallen behind by a double-digit margin. They didn’t have to consume precious quantities of added energy just to stay close. This extra expenditure left Golden State spent near the midway point of the second quarter in Games 3 and 4. The Warriors did not have to dip into this pool of reserves in Game 6. It mattered.

What also mattered during the first three and a half quarters of Game 6: The OKC crowd was happy, but not crazy, and that’s pretty much how it stayed the whole game. Part of this pattern was the product of the Thunder’s inability to build on their own success, and a function of that was the Warriors’ improved 3-point percentage. Here’s how it broke down by quarter:

To give some perspective on this, the Warriors shot 2-for-10 in the second quarter of Game 3, when the game got away from them. Their ability to take and make better 3-point attempts was a critical piece of their ability to hang around in Game 6 until the Thunder self-destructed.

A great deal of immediate postgame commentary naturally zeroed in on Klay Thompson and his 11 3-pointers, which broke an NBA record. I understand that, but I didn’t make that the centerpiece of this game report because this is a team, and Thompson is part of it. What the team accomplished Saturday night, while unquestionably impossible without Thompson continually keeping the game close, would also not have been possible without Andre Iguodala’s defense, Draymond Green’s tenacity, and (yes) Harrison Barnes’s 3-pointer with 7 minutes to go, a triumph of process.

Oh, and there was this guy, too:

Steph banks it in! https://t.co/1yXYdD9sZt

Steph Curry was the Anti-Durant in this game.

He picked his spots until his shot started to drop. He encouraged Thompson at the start of the fourth quarter to “put on a show out there and have fun.” He’s seen Thompson unleash a crazy shooting spree several times before. In Thompson’s 37-point quarter against Sacramento last season, Curry was practically running the ball over to Klay on every possession. He knew what his teammate had inside him.

However, at the very, very end of Game 6, Steph Curry delivered the dagger shot you see above.

It was Curry who stole the Thunder’s last-hope inbounds pass.

It was Curry who had 10 rebounds, twice the number of center Andrew Bogut.

It was Curry who prompted this observation from Warriors announcer Tim Roye:

“Like we’ve seen all season, hands on heads, disbelief. ‘What just happened’? It’s the Curry Experience, and it’s back in Oklahoma City!”

When the series started, we all thought about February 27, when the Thunder led the Warriors throughout the night at home, only to have Curry score 19 in the second half and 12 in the overtime, capped off by the instantly famous 35-footer as time expired in overtime for the win. Through the course of this unforgettable series, we let that memory take a back seat in our minds, until Saturday.

Even on a night when his teammate, Splash Brother and friend Klay Thompson was the story, Steph Curry reminded us why he is the MVP.

He forged the greatest win in the history of the Golden State Warriors.

Klay Thompson was the Tower of Power, but Steph is the one who made sure this series is coming…