The Spurs were just about to make one of those incredible comebacks they tend to do even when they are resting their star players or packing it in for the night. They had cut Oklahoma City’s lead down to 10 points. Then they tried inbounding the ball and Russell Westbrook did the rest (see: above).

With a 19-game win streak at stake, San Antonio did not seem really to care. There was not the urgency to protect that win streak as Duncan and Parker sat on the bench (Manu Ginobili sat out the entire game).

So, congratulations Thunder. You swept the Spurs and ended their long win streak. If Gregg Popovich could be bothered with such things.

The Minnesota Timberwolves have been scratching and clawing their way back to .500 this season. They had finally gotten there with a chance to defeat the Mavericks and climb above the Mendoza line and into a winning season (at last). And then . . .  {youtube}FXJtPMbMLgg{/youtube} Kevin Love's game-winning 3-point attempt was blocked(?) by Shawn […]

It's the final CC Video of the Day for 2013 and might as well go out with a bang courtesy of Pistons' Greg Monroe. During the recent Pistons-Wizards matchup, Monroe found himself streaking to the basket with only Wall standing in his way. Of course seeing how Monroe towers over Wall, it is a wonder […]

Kevin Durant had something special for his former teammate James Harden during a recent Thunder-Rockets matchup and no, it was not a bro-hug or a token of his appreciation for the time he spent with him in OKC. Instead, it was a one-handed dunk which left Harden looking silly. Check out the carnage left by […] 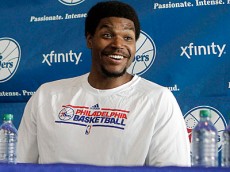 The Cavaliers low risk move to bring in Andrew Bynum on a two-year deal appears to have run its course. The Cavaliers unceremoniously suspended the veteran big man Saturday for violating team rules. What those team rules were is unclear at this moment, but it does appear that his time with the Cavaliers will come […] 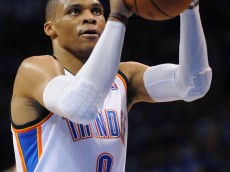 You could easily call December 27 Black Friday with all the horrible news that came down. None may be so horrible for NBA fans as the rumor going around that amazing halftime entertainer Red Panda is out for the year with her own injury. You know when that happens life really sucks. Friday seemed especially […] 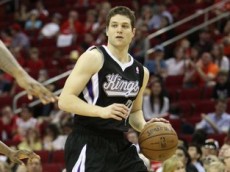 Before the Holiday break, Zach Lowe of Grantland left a big doozy of a present for NBA fans to stew on. That would be the much talked about NBA Draft Wheel that would replace the Lottery. The idea is this: Each team's pick for 30 years is completely set in stone. Every team would be […]

They say Spurs' Tim Duncan is boring or simply just fundamental. That he rarely shows emotion on the court and isn't marketable. Oh how people are quick to rush to judgment. Before the Spurs' recent game versus the Raptors, Duncan had some fun with his former teammate Sean Elliott (who is now a Spurs TV […] 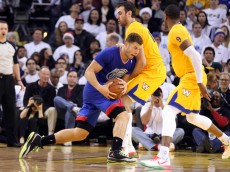 Christmas Day's basketball games were a complete dud. Except for that finale, a doozy of a two-point win for the Warriors thanks to Stephen Curry's late-game layup. Chris Paul could not match and that was that. The story in Oakland though was who was not on the floor in those final moments. That was Blake […]

Christmas is an easy date on the calendar to start saying the season is getting ready to turn. It is a dividing line in the season as basketball takes over the sporting world's conscious nationally with football season preparing to end. The broadcast networks begin featuring the NBA more prominently in their sports lineups. There […] 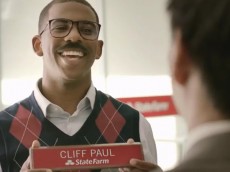 Two years ago on Christmas Day, State Farm introduced us to the world of Chris Paul and his alter ego/twin brother Cliff Paul. The ad campaign was ingenious as both the basketball verison and the argyle-sweater-wearing insurance agent version both assisted in their own way. The ad campaign took off in a way the insurance […]

Life without Lopez tough Pacers 103, Nets 86 If there is one bright spot to the disaster of a season this is quickly becoming for the Nets, it is that Brook Lopez fit nicely into his role and could still be counted on for his dependable average of 20.7 points and 6.0 rebounds per game. […] 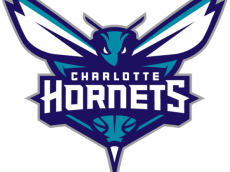 In a move that was really a long time coming, the Charlotte Bobcats can always point to Dec. 21, 2013 as the day the team really became the Charlotte Hornets once again. At halftime of the team's game against the Jazz, Michael Jordan stepped to center court and unveiled the new logo and identity for […]

Standing at 7-foot, one would think an NBA player would have no issues knocking down an easy 2-foot hook shot…. right? Well apparently not for Spurs' Tiago Splitter. During the Spurs-Warriors recent matchup, Tiago found himself with a wide-open hook shot only to see it fall short… very short. Check out Tiago blowing a wide […]

Before Saturday's game between the Bobcats and the Jazz in Charlotte, Jazz forward Enes Kanter decided to have some fun with former teammate Al Jefferson. Kanter left a special note for Jefferson, who signed with the Bobcats in free agency this past summer, in his locker before the game. In said letter, Kanter promised to […]