The NBA’s Eastern Conference playoffs have provided a number of timely reminders to sports fans.

One reminder is that the playoffs need to be desegregated in terms of conferences, and ideally turned into a conference-free bracket. The NBA’s need for conferences no longer exists. The concept has outlived its usefulness.

Another reminder is more specific and subtle, but it’s the kind of debate sports fans always need to confront.

Does a close series or a close competition automatically become better than a more lopsided competition in which the winning team (or athlete) plays well?

This is — one should concede at the outset — a matter of taste, so it’s not as though there’s an empirically correct answer and an objectively wrong answer. An important idea to promote at this early stage of the discussion is that a “pretty blowout” (in which one team plays at a very high level in the course of crushing its opponent) is more compelling if it wasn’t expected before the competition began. The 2014 San Antonio Spurs were not supposed to make the NBA Finals against the Miami Heat look easy, but they did. As a result, the Spurs’ attainment of a supremely high standard became more compelling than it would have been in a series expected to be a clean kill.

The Cleveland Cavaliers’ romp over the Toronto Raptors in the first two games of the 2016 Eastern Conference Finals represents a pretty blowout. The Cavs certainly are playing well and attractively, making a large percentage of the open shots they create. However, since (nearly) everyone expected this series to be a nolo contendere festival, it’s harder for Cleveland-Toronto to generate any buzz. It’s worth considering the merits of “pretty blowouts” relative to expectations.

It’s worth saying a little more about that last word: expectations. They serve as a form of cultural programming, conditioning us to evaluate competitions based on certain details and characteristics. This leads us into the heart of the discussion this piece is meant to stimulate.

Many sports fans have been conditioned to think that a close competition is inherently a good competition. (Again, this is a matter of taste, and therefore something which should not be shoehorned into a right-or-wrong framework; that said, this is a cultural reality among many sports fans.)

If I had a dollar for every time I’ve seen or heard (or read about) a fan calling a game “great,” when it was — quite clearly — not great, but extremely theatrical and tense in the final few minutes, I’d be able to build that summer cottage I’ve never wanted. The larger community of (North American — I can’t speak for Europeans or other international citizens) sports fans is not conditioned to evaluate games through the prism of raw (read: technique-based) quality, but through the lens of entertainment value.

For instance: Game 6 of the 2013 NBA Finals is viewed as one of the great games in NBA history and NBA Finals history in particular. That game is certainly memorable; it will acquire a lasting place in the story of professional basketball, for many good reasons (and a few not-as-good reasons). However, in terms of pure quality of play — pure craftsmanship and technique — Game 1 of that series represents the best game I have ever seen in terms of checking every last box of aesthetic beauty. Neither the San Antonio Spurs nor the Miami Heat committed many fouls or turnovers. Basketball ceased to be the inevitably rougher, more brutish sport it has become. The professional game most closely resembled Dr. James Naismith’s vision on that night in Miami.

Yet, because that was Game 1 of a series which took many subsequent twists and turns — in a series which, on balance, was not that great — it will always live in the long shadow of Game 6. This is how theatrical components dwarf an appreciation of technique in sports… and not just basketball.

The six- or seven-game series with one close game after another might be more dramatic, but if each close game is close simply because neither team is good enough to pull away, it’s not something to admire. This was true for the Heat-Knicks series of the 1990s, and it’s true for the 2016 Eastern Conference playoffs in the bottom half of the playoff bracket. 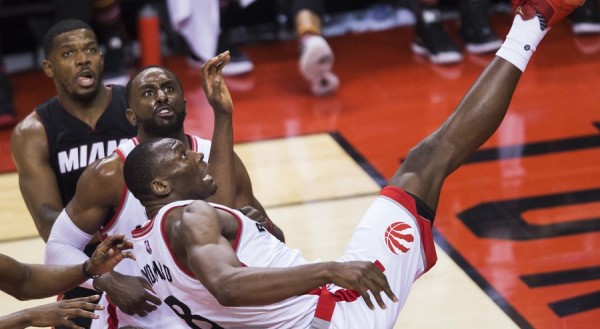 Bismack Biyombo — who has enhanced his NBA career this spring; he’ll make a lot of money as a result of his performance — became a crucial, central player for the Toronto Raptors.

That’s a wonderful thing, and yet it’s also a problem.

When the 23-year-old Biyombo — not a more polished 26-year-old version we could witness in three years — is an essential performer in the playoffs, one can get a sense of how diminished the playoff field actually is.

In the bottom half of the East playoff bracket — the 2-versus-7 and 3-versus-6 playoff matchups — one team had to reach the conference finals. In a playoff format with a “strict bracket” (in other words, no re-seeding is allowed after each round), the 2-3-6-7 quartet had to produce a conference finalist. If reseeding existed and the Indiana Pacers (seeded seventh) had beaten the Raptors in round one, the conference semifinals would have matched Cleveland and Indiana (1 versus 7) and Miami-Atlanta (3 versus 4, the middle seeds in a reseeded system). A strict bracket stood in the way.

In the 2-3-6-7 quartet, then, all three series went seven games. All three series were dramatic (Miami-Charlotte as the 3-6 series, Toronto-Indiana the 2-7 series, and Toronto-Miami the 2-3 series).

The counter-argument many (reasonable) people will make is that while the bottom half of the bracket featured a bunch of choppy seven-game series, the top half of the bracket has featured a Cleveland sweep of both Detroit and Atlanta. When a series — even one with aesthetic virtues — reaches 2-0 or 3-0, it’s less compelling compared to an ugly 1-1 or 2-1 series.

This is the debate raised by the East playoffs: length and theatrical components versus technical merit in a more lopsided series.

It’s a matter of taste, yes, but the point about technical merit deserves to be thought about at greater length.

A classic example of a great sports competition within the context of a blowout did not occur in basketball, but in tennis. In the 2014 Wimbledon ladies’ singles final, Petra Kvitova became essentially unplayable in her 6-3, 6-0 annihilation of Eugenie Bouchard. It’s true that Bouchard was not at her best, but even if she HAD been at her best, she would have lost this match 6-4 and 6-3 (or something close to that).

Kvitova was just that good:

The length-and-theater-versus-technical-merit sports debate is always worth revisiting. The 2016 NBA East playoffs offer sports fans a fresh opportunity to engage in a meaningful discussion.