After losing its first trio of games, there hasn’t been a better team in the Eastern Conference than the Indiana Pacers. Larry Bird’s reengineered contender — once a behemoth bruiser trading blows with LeBron James in the conference finals, now a sleek, offensive powerhouse — has hit a groove. Indiana owns the league’s third-best net rating at 7.9 points per 100 possessions, per NBA.com, over its last 16 games.

Paul George is one of the five best players in the NBA. In any other season, George’s resurgence mere months removed from leg surgery would be all anyone wants to talk about. Instead, Stephen Curry is 22 games into a convincing Michael Jordan impression, and the Warriors have yet to lose despite Christmas music flooding the streets.

The Pacers host the Warriors Tuesday night in what many are calling the reigning champion’s toughest test during their unrelenting winning streak. Golden State has won every game despite missing Steve Kerr on the sideline as he recovers from a complicated back operation, and Luke Walton has managed to keep his cool in Kerr’s absence. 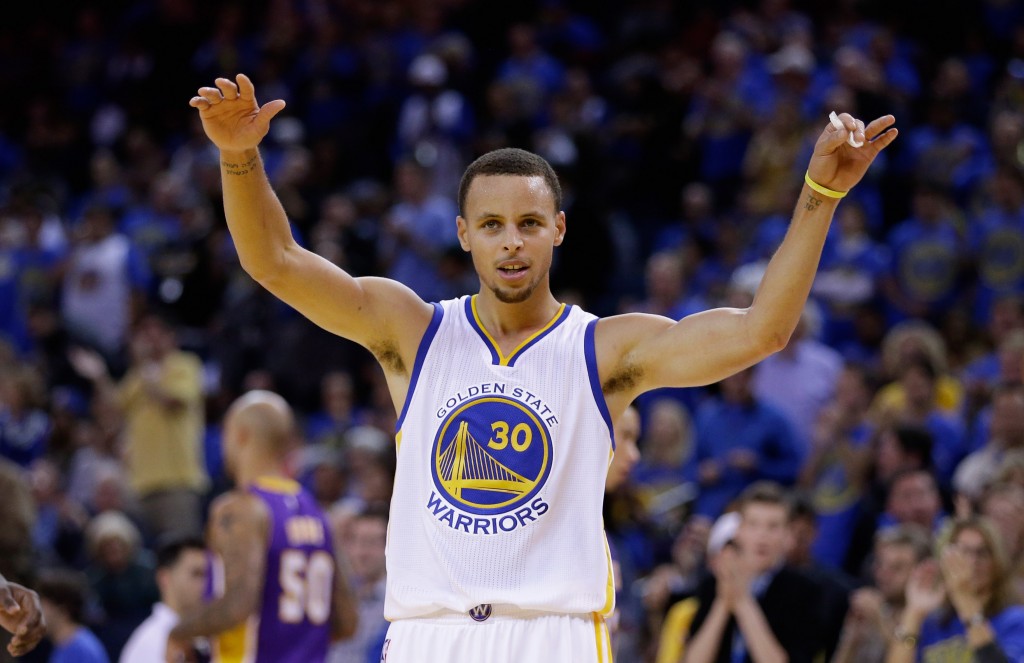 The Warriors have broken a sweat on a number of occasions. Both of their clashes with the Clippers, the best rivalry in the league, have fit the bill. Road games against Utah and Toronto went down to the wire, and Brooklyn, a surprisingly testy matchup for Golden State, held a third quarter lead on Sunday before giving up the ghost.

As invincible as Curry and company have performed on the whole, flippant play has occasionally reared its ugly head. In George, the Pacers offer the type of celestial talent believed to be the antidote for the Warriors’ constricting switching scheme. Indiana’s ascending perimeter play means the Pacers can hang with the Splash Brothers without falling on their face. A victory Tuesday would give cachet to the Pacers’ efforts to modernize, while also thrusting Indiana into the conversation as contenders.

Working against Golden State is the nagging ankle injury to Harrison Barnes, which will cost the premium swing man at least the remainder of the team’s road trip, according to Inside Bay Area. Still only 23, Barnes was playing his best basketball — shooting 38.9 percent from deep on a buffet of open looks, and rounding out the Death Lineup that Golden State only employs when it hears the beckons to the call to finish their opponents Mortal Kombat-style.

With a win tomorrow, the Dubs would become the 1st team in NBA history to start 13-0 on the road. The Weekly Dish » https://t.co/GiT1VKsBl4

Without Barnes, Golden State has chosen to keep its bench rotation intact by promoting Brandon Rush, but this has come with complications defensively. Rush is a sharpshooter with excellent size, but he lacks lateral quickness, and the Warriors are allowing 103.4 points per 100 possessions, per NBA.com, whenever he’s on the floor. That’s a substantial drop off from Barnes’ 97.9 defensive rating.

On Saturday, Toronto came out of the gate targeting Rush. Luis Scola pounded Rush with screens, pealing off for easy jumpers and setting DeMarre Carroll loose for shots on the wing and baseline:

Golden State was forced to switch Draymond Green to Carroll, and Toronto countered by running its offense through Scola on the block. This mattered little — the Warriors hit their first five 3s and ran out to a 21-10 start — but it’s a blueprint for the Pacers. Rush is incapable of staying with George, which means he’ll likely be responsible for C.J. Miles, who has hit four 3-pointers in six different games and drilled 8 of 11 attempts against Portland on Friday.

Complicating things further for Golden State is the team’s propensity to turn the ball over. The Warriors are averaging nearly 16 turnovers per 100 possessions, mostly a result of playing at a league-high pace and showboating whenever possible.

The Pacers are third in the NBA in points off turnovers (20.1). Thus far, handing out free points several times per quarter hasn’t cost Golden State, but Indiana isn’t a team hurting for handouts. Meanwhile, these mistakes have kept lesser opponents in games. Brooklyn went on a 12-0 run to end the first half on Sunday, stretching it to 16-0 in the third quarter, by creating turnovers. Shane Larkin collected three steals by stepping into and breaking up overaggressive Warriors’ plays.

Even as the onslaught continued from Golden State, Toronto stuck around in the first half by playing handsy defense, boasting lineups with flailing arms that disrupted passing lanes:

The Raptors ended up with a 9-2 steals advantage. One of their best defensive combinations was pairing Scola, an underrated team defender, with Patrick Patterson, a poor man’s Draymond Green on that end (the duo was +12 in eight minutes). The key to these lineups was Golden State having Festus Ezeli on the floor, which allowed Toronto to play Scola — something it couldn’t do if Golden State had access to its best lineups.

Taking Ezeli out would mean sacrificing rim protection against an aggressive driving team, plus punting on the offensive glass, which was another way Toronto managed to hang around. Golden State is 29th in opponent’s points in the paint (45.7) and giving up 11.6 offensive rebounds per game.

The urgency to play Ezeli is heightened with the loss of Barnes. The Death Lineup with Shaun Livingston in Barnes’ place, for instance, was torn to shreds by Toronto. Offenses can bump Livingston like a guard, and the Raptors did a fantastic job of freeing Kyle Lowry and Cory Joseph to enter the lane with a full head of steam:

In the fourth quarter, DeMar DeRozan, who was abysmal from the field, took Ezeli from the 3-point line to the basket. On the next play, Lowry drove the baseline and expertly used the rim to wall Ezeli from the ball, giving Toronto a 96-95 lead. In the closing minute, Golden State surrendered its worst interior breakdown against Lowry yet – Lowry breaks for the rim and there’s not a Warrior foot in the lane:

Brooklyn got back into the game on Sunday by using Larkin in a similarly aggressive manner. When Ezeli would wander too far from the basket, Larkin blew by him:

And in the second half when Ezeli would sit down anticipating the drive, Brooklyn’s guards and big men would use the space above the nail. On this play, the Nets quickly reverse the ball on a slo-mo Joe Johnson drive, and Brook Lopez sets a monster screen on Curry to free Larkin for an open 3:

Eventually, Golden State took away the drive against Brooklyn because it didn’t respect its shooters. Lopez and Thad Young were free to take as many jumpers from the nail as they’d like. Young was excellent on Sunday, recording his second 20 and 10 performance against the Warriors, but he and Lopez shot a combined 3 for 11 from midrange. Golden State pulled away in the third once Brooklyn went cold.

Indiana can use these ideas Tuesday, banking on its superior personnel to string along four quarters of production. Case in point: the Pacers’ Thad Young is Paul George, who is shooting 45 percent from range this season and averaging 27.5 points per game.

This could have potentially been a great coming out party for Myles Turner, who was showing great signs for a rookie project before he went down in November. Indiana drafted Turner as a stretch-5 candidate, and he could have turned a matchup with Ezeli on its head by dragging him away from the hoop on one end and cheating off him on the other.

Monta Ellis and George Hill will make Golden State pay in the drive-and-kick game if the team fails to protect the paint, but playing a traditional center neutralizes one of the Warriors’ best advantages. Ezeli is shooting 7 for 32 in the paint (21.9 percent) and hitting just 27.4 percent on non-dunks and layups, per NBA.com. If he and Curry are on the strong side, defenders can blitz Curry and just force Ezeli to beat them:

Now, Indiana is not without its faults — and they are much easier to spot out than Golden State’s. The Warriors get after shooters — the team is third in opponent’s 3PM and 3PA and second in opponent’s 3-point percentage, and the Warriors are holding their opponents to the fourth-lowest eFG% in the league.

Indiana doesn’t score in the paint outside of drives, and the Pacers (25th) are currently giving up more second chance points than the Warriors (19th). To beat Golden State, opponents almost have to clean the offensive glass in order to find easy shots; gifting those same looks back to the Warriors isn’t an option, and Ezeli has the third-highest offensive rebounding percentage amongst all centers.

George Hill is a fine individual defender, and he’s qualified to chase Curry, but even the best guards will lose contact with Curry eventually. In those moments, what will Ian Mahinmi and Jordan Hill do? They should follow Curry wherever he goes, but that’s easier said than done — chasing him that high has consequences. Curry is an expert at sniffing out defensive imbalance, and if it’s not him making the lethal pass to Klay Thompson or another one of the seemingly never-ending offensive weapons the Warriors throw at teams, it’s Green:

In Indiana’s 123-111 loss against Portland, Damian Lillard (26 points) and C.J. McCollum (21 points) combined for 8 of 17 shooting from downtown. Ellis was a problem and Frank Vogel couldn’t keep him on the floor. In his place, Rodney Stuckey logged 31 minutes and sank the offense, posting a minus-17. All the while, the Blazers’ lead guards got whatever shots they wanted:

Lillard burned Hill in transition throughout the game, as the Blazers benefited from a hellacious Pacers’ shooting performance outside of Miles. On this dance move from Big Game Dame, you can envision Curry, although perhaps Lillard is a bit more deliberate:

Oh, and the final ingredient for any team trying to beat Golden State… dumb freaking luck. Curry missed a pair of free throws against Toronto, and Golden State shot 26 for 36 from the line. Golden State began 6 for 16 on the stripe against Brooklyn; the Nets were up 60-59 before the Warriors made six of their final seven foul shots.

Against Portland, George was 1 for 4 in the restricted area, and he missed all nine of his attempts from behind the arc. Al-Farouq Aminu was spectacular on him — forcing George baseline without giving up access to the rim, prodding George into turnovers and passes to unwilling shooters:

But George missing that many shots is plain unlucky. And if Golden State hits 25 of 25 foul shots and comes out swinging defensively, that’s the way it goes for Indiana. Yes, it’s true that the Pacers offer a unique challenge to the Warriors. Until Golden State successfully beats itself, however, it’s difficult to imagine anybody else pulling it off.