Kevin Durant experienced the best of times over the past three and a half weeks.

He experienced the worst of times Saturday night in Game 6 of the Western Conference Finals.

Durant’s defense, not his offense, has been one of the revelations of these playoffs. Billy Donovan has squeezed more and better defense out of No. 35 than Scott Brooks ever did. The Thunder’s superstars, K.D. and sidekick Russell Westbrook, defeated the San Antonio Spurs with their defensive prowess, and with five minutes left in Game 6 — at home — two of the best players in the world led the defending NBA champions by seven points. Durant and Westbrook were so close to finishing off one of the most impressive two-series runs in NBA history, and without question, THE most impressive two-series, non-NBA Finals sequence of all time.

Oklahoma City was about to beat a 73-win opponent on the heels of eliminating a 67-win foe, just to get to the Finals. Maybe it wouldn’t have rated as an historic upset, but it certainly would have stood as a towering and immortal achievement. The Thunder just needed a little more from Durant and Westbrook.

Especially in Durant’s case, they didn’t get it.

WHY they didn’t is worth considering after Game 6, whose highlights (or for the Thunder, lowlights) can be viewed here:

The Thunder certainly felt the full weight of pressure at the end of Game 6. They were the hunter through the first five games, but in Game 6, the need to close out the series and avoid going back to Oracle Arena for Game 7 became an undeniable source of stress. It’s true that anxiety slows down the body, making it sluggish when it needs to be fluid and naturally responsive. That said, fatigue — just as much as stress — seemed to detract from Durant’s performance in the latter stages of Game 6.

Look at this freeze-frame in the final minute of Saturday night’s contest: 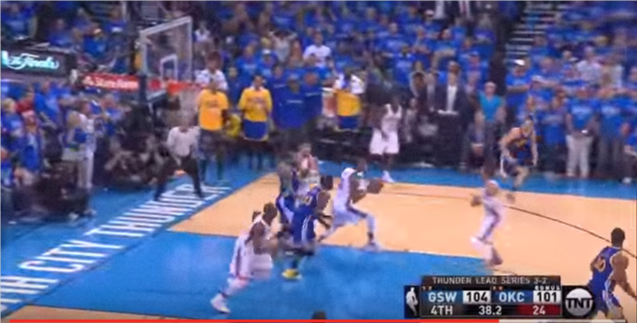 That’s Kevin Durant with the ball.

He’s about to give the ball to Westbrook, but you can see Draymond Green in the middle of the paint, about to get into the passing lane.

There’s a reason the bounce pass is better than the chest pass, and is generally the more recommended play when trying to move the ball within a relatively contained area: It is more difficult for the defender to bend over and reach closer to the floor.

Yes, this is only a five-foot pass, but a bounce pass would have made it a lot harder for Green to intercept the delivery. Durant threw a (not-that-crisp) chest pass Green subsequently deflected. The Warriors — consistently killed in this series by Oklahoma City’s ability to gain extra possessions on the glass — managed to secure more possessions in the final two minutes because of the turnovers the Thunder coughed up. This steal by Green was Draymond’s biggest contribution in Game 6, and by extension, his season with the Warriors. The play set up the Steph Curry dagger bucket which took this series to Game 7 in Oakland.

Fatigue, more than stress, creates that kind of turnover.

Durant didn’t panic in that situation. If you’re able to watch the YouTube highlight of that play, Durant’s actions (in the process of making that chest pass) are fluid and automatic… but wrong. Fatigue leads the mind to lose track of a basic detail — bounce pass instead of the chest pass — which makes all the difference on a relatively simple play. Stress is more evident in a late-clock situation or when a player is double-teamed near a boundary. What happened with Durant with 38 seconds left in Game 6 was more the result of a weary mind, which had carried a long, athletic body within an eyelash of a return trip to the NBA Finals.

Why this emphasis on fatigue? It’s worth bringing an important historical comparison into this discussion.

In Game 5 of the 2014 Eastern Conference Finals, the Miami Heat took a 3-1 lead into Indianapolis against the Indiana Pacers. LeBron James got into early foul trouble, and Heat coach Erik Spoelstra was not aggressive in keeping Bron on the floor. Narrowly viewed, the decision seemed horrible. You need your best player on the floor in the latter stages of a conference finals game if you intend to win it.

However, coaches are paid to make decisions in larger contexts, not just immediate ones.

Miami led the series, 3-1. Second, the Heat led the series with a home game — Game 6 — on the horizon. The Heat were not hosting Game 5 and in position to avoid a road trip for Game 6 at all costs; they had Game 6 in their hip pocket. That was the game they absolutely had to win in order to finish off the Pacers two years ago.

LeBron played only 24 minutes in that Game 5. In the video above, you can see how fresh — and influential — he was in Game 6. Limited minutes — and some twists of circumstance — put LeBron in perfect position to be a monster in a home-court close-out game for the Heat. He got to the rim. He set up teammates. He made lucid plays unaffected by fatigue.

He was everything Kevin Durant wasn’t in a home close-out Game 6.

None of this means that Billy Donovan erred by trusting Durant with 45 minutes in Game 6. With five minutes left in regulation, the Thunder had everything they could have possibly hoped for, leading by seven. It was up to Durant and Westbrook to play through the heavy workload and finish the job at home. They didn’t do it; Billy D. was not responsible for what happened at the end of Game 6. This certainly rated as a game won by the Warriors more than it was lost by the Thunder, but if anyone on the Thunder lost it, it was Durant more than Donovan.

Yet, if anything should be said about Donovan’s coaching in this series after Game 6, it is simply this: Billy D. played Durant 45 minutes in Game 5, on the road, up 3-1.

Reasonable people can disagree… but it’s hard to dismiss the matter outright.

Fatigue became the Thunder’s enemy at the worst possible time in Game 6. They’ll have to find a way to manage minutes, push through fatigue, and get more from their bench in Game 7.