If I had to identify the coach who performed better in the just-concluded Western Conference Finals, I would rate Billy Donovan higher than Steve Kerr.

However, this hardly means Kerr performed poorly. Kerr’s lineup combinations were not as effective or transformative as Donovan’s roster manipulations, but the coach of the Golden State Warriors crafted a marvelous series just the same.

These statements are quite counterintuitive, so one must step back first and make a simple statement about comparison, blame and credit in a high-stakes sports competition.

It is so easy, within the dichotomy of winning and losing — one team exults, the other team curses the darkness — to assume that the winner did well and the loser really sucked, with not a lot of nuance or complexity in between. The winner must have done everything right, the loser must have choked, and that’s it. Period. End of discussion. Far too many sports fans arrive at those overly simplistic conclusions.

The reality of the Western Conference Finals is so much more complex. 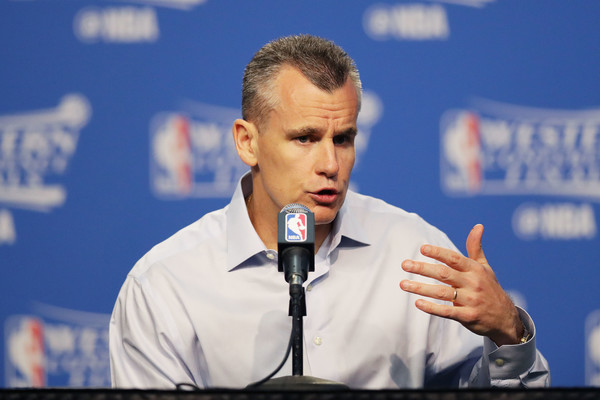 Sometimes in sports, a competition has no winners. Other times, there are no losers. Sometimes, both competitors increase and magnify each other. In separate instances, two teams or athletes diminish each other: One team (or player or coach) doesn’t excel on the road to victory. The opponent is so horrible that the winner survives by merely being less incompetent. All these shades of gray apply in different and very particular circumstances.

The Western Conference Finals provided their own very distinct tension points and contours.

Think of what just happened over the past two weeks: A 73-win team was stretched to the limit by a 55-win team. The 55-win team held a 3-1 series lead before the 73-win team rededicated itself on a number of levels and played three superior games, two of them at home.

Within this context, it becomes easier to see how one can juggle the two statements: Donovan coached better than Kerr, but Kerr was still extremely impressive. Donovan got more from his resources than Kerr did, but Kerr demonstrated considerable skill in guiding his players to a series victory. In a world of complexity, you can hold seemingly competing truths together. In a world where absolute statements — with no allowance for ambiguity — are the only form of currency, such distinctions are meaningless.

This column attempts to deliver a complex reading of events to you, the reader, so since you’re still here, consider how Kerr excelled in this series even while getting slightly outcoached.

The energy of Russell Westbrook is a marvel, and moreover, Westbrook — though a fixture in the playoffs for several years more than Stephen Curry — is still a year younger than his Golden State counterpart. Both Westbrook and Kevin Durant are 27, whereas Curry is 28. For this reason, and because of the limited nature of Oklahoma City’s bench, Billy Donovan shortened his rotation in Game 7 while giving K.D. and Russ extended minutes (46 for Durant, 45 for Russ).

It’s hard to blame Donovan for these decisions. In fact, this high-minute approach put the Thunder five minutes from the finish line in Game 6 on Saturday. Durant and Westbrook were supposed to bring OKC home to the Finals, and while they did need more support, they still failed. Donovan didn’t fall short here in terms of process, but the result of this series might give him (and general manager Sam Presti) cause to make one or two important tweaks to the roster and rotation for the 2017 playoffs.

What magnifies OKC’s situation? Steve Kerr’s use of starter and bench minutes.

Consider the way the Golden State bench stumbled in the first half of Game 7. It became very reasonable to think Kerr needed to shorten his bench alongside Donovan. The following tweets are not meant to suggest that the author of them (a columnist for the San Jose Mercury News) is off base — anything but. These tweets seemed very reasonable; after the fact, they remain reasonable:

Minutes in the first half: Draymond 22, Iguodala and Klay 21, Curry 19. Might only rest minute or 2 each in the 2nd half.

Think this is developing into a marathon game for the Warriors' main 6.

What about Durant and Westbrook in the second half?

Durant stepped out for 30 seconds in the third, and Westbrook played all 24 second-half minutes.

Guess whose jump shots were pure? Guess whose legs appeared to be fresher? Guess who led by 11 with nearly three minutes left before one last desperate Durant push?

Everyone kept wondering — legitimately, I might add — why Kerr kept running out Anderson Varejao, Marreese Speights and Shaun Livingston when it didn’t seem they had a place on the floor in this series. Why did he go to those odd lineups early in the second quarters of games? He did some funky stuff in the second quarter of Game 4 of the Houston series. What was the bigger plan?

It wasn’t so much the in-the-moment move, we can see now; it was to preserve Steph, Klay and Dray.

Steph averaged (rounded to the nearest whole number) 39 minutes in Games 5 through 7. Draymond averaged the most, at 41. Klay averaged 40. Compared to Durant’s 45 and Westbrook’s 43, the Warriors’ best players gained about four minutes of added rest per game, 12 if spread over the three contests.

This is the subtle way in which Kerr’s decisions had a positive effect on the series. Sticking with the Death Lineup in Game 6 might have been an act of last resort, but previous events in the series could have led him to make a tweak. He stuck with his No. 1 plan.

Beyond those moves, Kerr simply held his team together. The Warriors — rattled after Game 4 — regrouped and banded together, showing what they were made of not in terms of shooting skill or defensive acumen, but sheer belief in themselves and each other.

Kerr might not have done as well as Donovan, but he did well enough to guide his team through this withering crucible a champion usually has to endure to reach the NBA summit.

As a result of his considerable coaching prowess, Kerr has achieved something special in NBA history. Since 1958, only two head coaches have made the NBA Finals in each of their first two seasons on the job. Kerr is one.

This is the other: 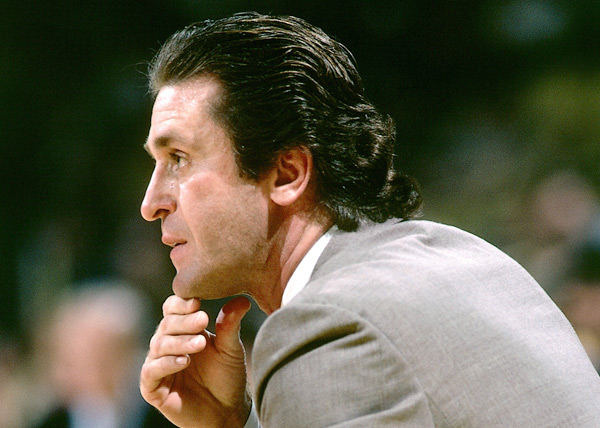 Not bad, Steve. Not bad at all.