It is a first-world problem, but a problem nonetheless, for many professional athletes: How do you perform well over a broader expanse of time when so many games lack rhythm?

How does a tennis player sharpen her groundstrokes when the opponent either hits an ace or a double fault on nearly every point?

How does a quarterback develop any precision when he hands the ball off on first and second down; endures a three-and-out; and watches his defense surrender clock-eating drives?

In the 2016 Western Conference playoffs, it should not be surprising that the Oklahoma City Thunder are on the cusp of winning them. In the Kevin Durant-Russell Westbrook era, the Thunder have often — if not always — become a team which serves up a fat clunker one night and then flourishes the next. That identity has been very much on display this spring. Oklahoma City couldn’t shoot straight in Game 2 against Dallas and then roared in Game 3 of that series. The Thunder no-showed in Game 1 against San Antonio and then saved their season with that close-shave victory in Game 2. OKC let go of the rope in Game 2 against the Warriors. Game 3 was a very different story on Sunday night.

The split personality of Russell Westbrook is, in itself, a more-than-adequate description of what the Thunder have been; what they are; and what they can ultimately become. The limits and the potential; the low tides of poor decision-making and the tsunamis of overwhelming athleticism; the agonies and the ecstasies found in Russ — these clashing characteristics are all bound and embodied in the Thunder.

When viewed in this way and from this vantage point, it’s no wonder that the Thunder are leading the West playoffs. 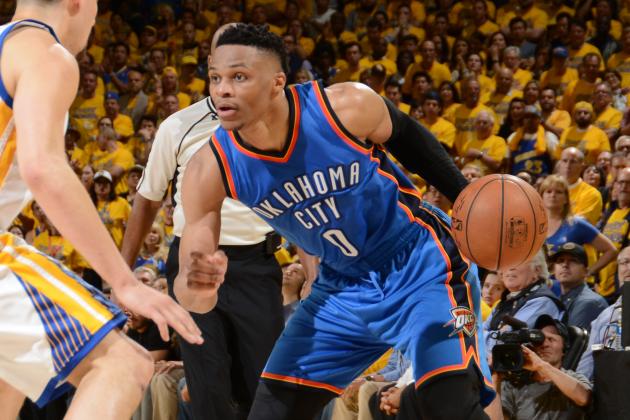 Golden State Warrior fans will cite the repeated presence of extended layoffs (something which should help Steph Curry rest from the strain of competition) as a negative influence on the Dubs’ performance. It shouldn’t be so harmful to a 73-win team, but it is… and it has been. Naturally, the Curry injury has disrupted the Warriors’ rotations, but perhaps the breaks between games are getting in the way of increased continuity, rather than rejuvenating Curry the next time he takes the floor. These developments have slowed the machinery of the NBA’s most rhythm-filled team.

The San Antonio Spurs, like the Warriors, failed to gain rhythm in these playoffs, the only difference being that the Warriors still have time (albeit not that much) to get their groove back. San Antonio got its tail kicked in Game 6, but for most of the first five games of the West semifinals, the Spurs played well in spots. The first three quarters of Games 4 and 5 were played mostly on their terms. However, anything they began to establish didn’t last very long. Conversely, the Thunder answered nearly every rough patch of play with a surge in the next 10 to 15 minutes to overcome their deficiencies.

These pendulum-swinging West Finals — close game, blowout, blowout — and the erratic West semifinals (Golden State-Portland fluctuated wildly) both followed a first round in which it was hard for any team to carry ample information into future playoff rounds.

The Warriors played the Rockets — you don’t learn anything from playing the Rockets.

The Spurs played the injury-ravaged Grizzlies. The Thunder played the similarly decimated Mavericks. Portland played the Clippers on even terms through four games, but when Chris Paul and Blake Griffin both got knocked out of that series, it was hard to say that the Blazers and Clippers shared a level playing field.

Everything about the West playoffs has been rhythmless to this point. One of many challenges for Oklahoma City in Game 4 is to replicate the opportunism and the killer instinct it exhibited in Game 3. The Thunder have shown they can bounce back from rhythm-free losses. Now they have to stack together wins in the context of a series which lacks a discernible feel and flow.