The Eastern Conference Finals between the Cleveland Cavaliers and the injured yet still scuffling Toronto Raptors are drawing very little reaction from #BasketballTwitter… and really, who can blame folks for not having much to say about this series?

Say this much for Cavs-Raptors, though: At least one team’s playing well. Sometimes, neither team does. You might see a closer game, but there’s more bad basketball to be digested.

At any rate, Cleveland-Toronto — headed either for a sweep or a five-game resolution — is leading many basketball fans to recall the worst conference finals in history. “Conferences” didn’t start in the NBA until 1971, and so we could dig around for a series or two in the mid-1970s. However, the three-point line wasn’t installed until the 1979-1980 season, which happened to coincide with the arrivals of Magic Johnson and Larry Bird. That season is considered the beginning of the NBA’s renaissance. Therefore, we’ll select the five worst conference finals since the start of the Magic-and-Bird era.

No YouTube videos — we don’t want your eyes to be hurt.

At least Game 3 of this series was entertaining, keeping the clash from acquiring a higher place on this list. Yet, by the time Game 3 arrived, how many people felt this series had any chance of going beyond five games? Atlanta’s Kyle Korver had been injured.

The quality of play suffered in this series because Kevin Love and Kyrie Irving were hurt for Cleveland. Thabo Sefolosha was out for the Hawks as well. Ultimately, this series became a mismatch because the Hawks were not used to breathing the rarefied air of late-stage playoff basketball. LeBron James and the Cavs showed Atlanta what it’s like to compete at a high elevation.

It’s absurd in the longer run of NBA history, but it happened: Byron Scott coached a team to a playoff sweep of a Rick Carlisle-coached team and made a second straight NBA Finals appearance.

The Nets and Pistons played a root-canal Game 1, taken by New Jersey, 76-74. As soon as the Nets won Game 2 in Detroit, 88-86, the series was over. When the action shifted to the Meadowlands, the Nets frolicked against the rattled Pistons, taking Game 3 comfortably and Game 4 in a runaway.

The early 2000s represented the worst period of NBA basketball since the start of the Magic-Bird era. It is no accident that the era gave us most of the worst conference finals in recent memory.

Gregg Popovich had won a title, but he hadn’t become one of the game’s elite all-time coaches. His Spurs hadn’t yet discovered the joys of Tony Parker and Manu Ginobili.

They lost only one of these four games to the mighty Lakers by fewer than 14 points. Games 3 and 4 in Los Angeles were decided by 39 and 29 points, respectively. Objectively — going strictly by point spread — this is one of the most lopsided conference finals series of all time, even more than 2015 Cavs-Hawks and several other sweeps which featured one big blowout (1998 Jazz-Lakers, 1987 Lakers-Sonics, 2013 Spurs-Grizzlies). This was a series in which two games completely got away from the losing team.

No pressure, Raptors, as you head home to Canada for Games 3 and 4 this weekend.

The fact that this series lasted six games, not four, doesn’t make it less awful. Bad basketball is bad basketball, and while television viewers can at least find an emotional tug in games which are close, the reality of ugly competition should not change a negative appraisal if the substance of the drama is lacking. Viewers were subjected to six games of garbage in this series, not four — imagine, as a point of comparison, this year’s Braves and Twins playing a 21-inning game. More baseball would not be a good thing in that case. For Canadians in the crowd, who would want to see the 2016 Toronto Maple Leafs and 2016 Edmonton Oilers play a quadruple-overtime game? You’d rather gouge your eyes out, yes?

That’s what this six-game series delivered to NBA watchers.

Look at this glorious screengrab: 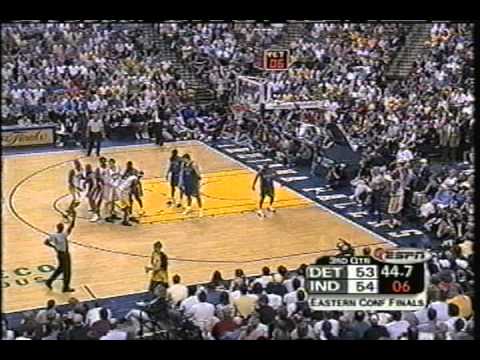 The average score for the WINNING TEAM in the six games produced by this series? 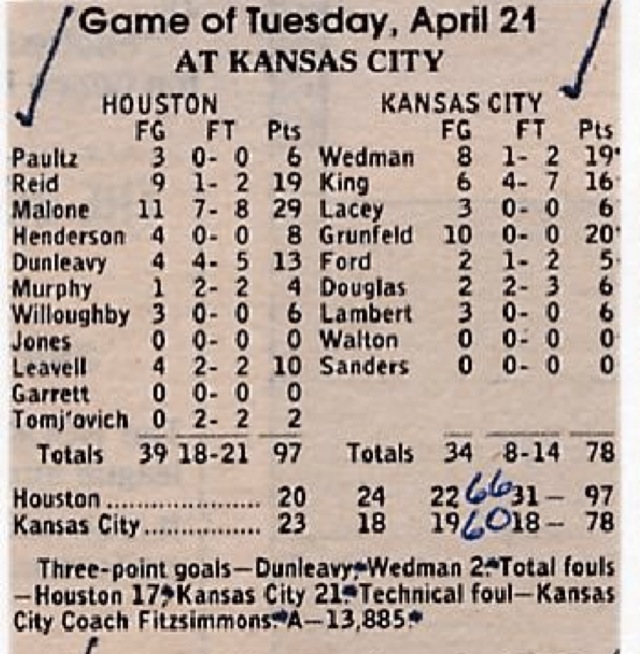 The reality of split-conference playoffs has — on several occasions — created an NBA playoff nightmare in which one conference finals series became the junior-varsity competition, and the other stood out as the varsity battle. Getting rid of conferences and seeding the playoffs 1-16 would not eliminate these scenarios, but it would certainly reduce them.

The worst example of a JV-and-varsity conference finals relationship occurred in 1981. CBS frequently tape-delayed broadcasts at this point in the league’s existence, and while viewers were deprived of the varsity conference finals in the East (the Philadelphia 76ers and Boston Celtics traded punches in seven delicious games), it’s just as well that minimal attention was visited upon the West Finals.

In 1981, the NBA (foolishly) played a best-of-three first round, which invited more upsets. The Los Angeles Lakers and Portland Trail Blazers were both knocked off in this bite-size first-round. The beneficiaries of the system were the Houston Rockets and Kansas City Kings, who then fought their way past the top two seeds (San Antonio and Phoenix) to meet in the West Finals with matching 40-42 records.

Yes, that’s not a misprint.

The quality of basketball reflected the teams’ win-loss records.

Kansas City averaged 107 points per game in the 1981 season (rounded up from 106.9), Houston 108 (rounded down from 108.3). These teams might not have been good, but they at least played aesthetically appealing ball, as did many teams in the 1980s NBA. In the West Finals, though, the weight of the moment and the size of the stage sucked them into a vortex of bad basketball. The losing team — in all five games of this series — failed to score 90 points. Only one game was decided by fewer than nine points in a series marked by constantly low scores. The Rockets — by scoring 100 points in Game 4 — became the only team to hit the century mark in any game of the series.

This is the body-snatched conference finals series from a spooky and disjointed 1981 Western Conference season, one the Phoenix Suns (57-25 in the regular season) will always remember as the fish that got away.