It is eternally true that human beings are biased.

Yes, bias can be dealt with and restrained, but reining in that impulse is a lifelong process. It is normally the case that we will be biased in favor of events, people, organizations, and other entities which enhance the reputation of our own communities.

As a resident of Seattle, I am not going to deny that I’m biased in favor of an NBA All-Star Game and weekend which cast my city in a favorable light. I am also not going to deny that I’m appealing to your emotions by referencing Seattle’s lack of an NBA team. That fact should (continue to) upset NBA fans who widely agree the league should once again sail into the Puget Sound… and not leave the harbor this time.

Nevertheless, with that preamble out of the way, it is entirely reasonable — debatable, but reasonable — to say that the 1987 NBA All-Star Game is the best All-Star Game in league history, and that the weekend attached to the game is also as good as the NBA has ever witnessed.

It’s hard to believe it’s been nearly 30 years since Seattle welcomed the NBA for its February festival, but stop and ask yourself: When was the last time the All-Star Game AND its dunk contest AND its three-point contest converged to produce defining moments in each of the three respective competitions?

In 1997, Kobe Bryant won the slam-dunk contest, and in 2000 — the last unforgettable staging of the event — Vince Carter left an indelible imprint on the art of dunking. In those years, two gifted shooters — Steve Kerr (1997) and Jeff Hornaceck (2000) — won the three-point contest, but as distinguished as Kerr and Hornacek were (and are), they did not rise to a Hall of Fame level in their playing careers.

As for the All-Star Game, the 2003 contest (Michael Jordan’s last) went into overtime, creating a one-of-a-kind theatrical buffet. The 1992 game — with Magic Johnson winning the MVP award months after contracting the HIV virus — provided the most poignant moment in All-Star Game history, hands down. Other games in 1993, 1984, and 1980 went to overtime and delighted both paying spectators and national TV audiences.

Yet, when did we have a year in which the Game, the dunk show, and the three-point three-for-all met (and maybe even exceeded) expectations in unison?

With all due respect to the likes of Craig Hodges or Peja Stojakovic, the three-point contest is never better than when the greats of the game take part. Bird gave instant legitimacy to the long-distance duel, whose debut year was 1986.

In 1987, Michael Jordan — with his running Superman dunk filling bedroom posters of little boys from sea to shining sea — won the slam-dunk contest:

The late Jerome Kersey put on a great show in his own right, with powerful dunks which were finished authoritatively and with a centered body which never appeared to be off balance. That Jordan eclipsed him with gravity-defying rim-rattlers marks a supreme feat in dunk-contest history. Only Dominique Wilkins and Vinsanity deserve to be placed in the same breath as MJ, and it was in 1987 when Air Jordan most famously took flight.

Those were the undercards on All-Star Weekend in Seattle.

The storylines before and after the clash in the Kingdome remain the stuff of legend. Before tip-off, it was known that Julius Erving, the Doctor, was going to play his final All-Star Game. As graceful and elegant a player as the sport has ever known, with a beauty which stood in mark contrast to Erving’s messy off-court life, Dr. J was responsible for the electricity which filled the cavernous arena in the early-afternoon hours.

After the game, writers and broadcasters were left to marvel at the storybook script which seemed too good to be true: Tom Chambers of the hometown SuperSonics — given a roster spot only because Houston Rocket big man Ralph Sampson couldn’t play — snared the MVP award with a high-flying performance in front of a giddy home crowd of more than 34,000 people. On a court with Jordan and Bird and first-time All-Star Charles Barkley; with Magic and Kareem and Worthy of the mighty Lakers; with Moses Malone and Kevin McHale and Isiah; with Hakeem the Dream, Alex English, and Mark Aguirre, Chambers somehow rose above the crowd to lift a trophy at the end.

Speaking of unlikely heroes, Rolando Blackman of the Dallas Mavericks found himself thrust into a position no player had experienced before… or has encountered since: He had to make two free throws with no time left, and no one standing on the sides of the lane, in order to send the game into overtime, with the West trailing the East, 140-138.

Here’s Blackman before the foul shots: 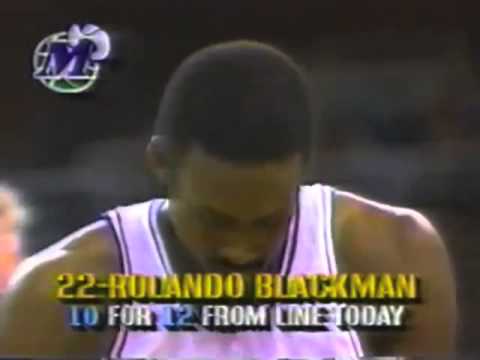 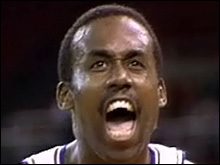 The fact that there was no live-ball sequence after the second foul shot — no one else was on the court — made Blackman’s free-throw celebration arguably the most demonstrative one in basketball history. It’s safe to say that no All-Star free throws were more vigorously cheered than those two in Seattle, paving the way for a 154-149 West victory.

The highlight compilation from the 1987 All-Star Game is here:

Michael taught us how to fly.

Blackman was the money man at the line.

If only this city will get another chance to host the league’s midwinter party.