Like “ALL IN” or “WE BELIEVE,” the words can so easily represent a cheap slogan which can be appropriated by other teams.

The only thing which matters for any team which uses a generic slogan is to live it out between the painted lines of a playing surface.

Monday night in Oracle Arena, the Golden State Warriors did exactly that, and as a result, they’re headed to the NBA Finals for the second straight season, in defense of their 2015 world championship. 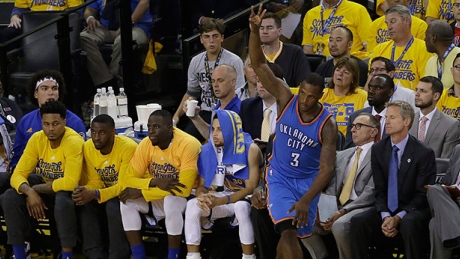 The Oklahoma City Thunder defeated the 67-win San Antonio Spurs. They won six games in a seven-game stretch against the Spurs and the 73-win Golden State Warriors. They took a 3-1 lead against Golden State and had a seven-point lead with five minutes left in a home-court Game 6.

Yes, Kevin Durant and Russell Westbrook led the charge for OKC. They played extended (40-plus) minutes in each of the last three games of the series, and Billy Donovan’s shortening of his bench almost worked out.

As much as we all gravitate to the superstars in a meeting on the mountaintop such as this one, basketball will always carve out an important, more-than-peripheral place for the role players. You can’t win games 2-on-5, as romantic as the notion might be. It’s true that K.D. and Russ stirred the drink for the Thunder in the process of giving OKC a 3-1 lead. It’s just as true that without Klay Thompson’s white-hot three-point shooting in the second half of Game 6 and the second quarter of Game 7, plus Steph Curry’s late dagger buckets the past two games, the Warriors don’t win this series.

Yet, Oklahoma City achieved all that it achieved — the takedown of the Spurs, the rattling of the champs en route to a 3-1 lead — in large part because its bench became better than the benches of the NBA’s two best teams. The Thunder’s bench outperformed the benches which were supposed to represent the industry standard in the Association.

In Games 5 through 7, that stopped.

Dion Waiters (pictured above) still played meaningful defense, but he and Anthony Morrow and Randy Foye didn’t contribute the way they did in the first four games of the series. Enes Kanter became the pivotal figure late in Game 5 against the Spurs, teaming with fellow role player Steven Adams to thwart the Spurs’ pursuit of glory. Oklahoma City’s reserves got stronger as that series continued.

Against Golden State, the bench battle swung to the Warriors down the stretch. That turn of events was partly OKC’s failure, but it was mostly the Warriors’ success.

You have to understand something very important about Game 7 and when it truly turned in Golden State’s favor: While Klay Thompson kept the Warriors close and Steph brought the win home on Monday in Oakland, the bench created the margin which fundamentally changed the contest. 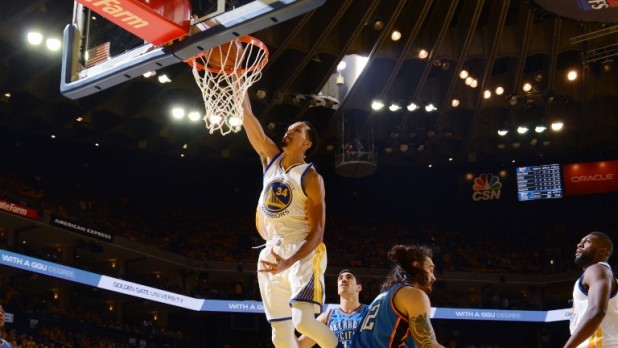 The score was 57-56 in favor of the Warriors, just past the midway point of the third quarter. The Splash Brothers had erased a 13-point second-quarter deficit with their three-point gunning, but Golden State needed complementary contributions in order to survive the Thunder in this sprawling, brawling series.

The Warriors proceeded to create a 71-60 lead by the end of the quarter, uncorking a 14-4 run to establish a healthy working margin. That margin came in handy when Durant scored seven straight points late in regulation to reduce Golden State’s lead to four. When Serge Ibaka fouled Curry on a three-point shot, the Warriors were able to attain the safety of a seven-point lead.

The number of points by the Splash Brothers in that 14-4 run? 0.

The number of points by Draymond Green in that run? 0.

The men who scored for Golden State in that sequence to close the third and turn a one-point game into an 11-point contest?

Those were the architects of the run which gave Golden State a crucial advantage in Game 7.

Consider this point as well: Golden State played Oklahoma City roughly even on the boards (47-46 for the Thunder). Of the Warriors’ 46 boards, 20 came from the bench. Harrison Barnes grabbed eight, Livingston six, Festus Ezeli four.

The loose balls which so consistently went Oklahoma City’s way for most of this series went to the Warriors in the fourth quarters of the final three games. Golden State — including its bench — made more of the hustle plays the Thunder had made in Games 1, 3 and 4.

This series was won primarily behind the three-point line — no argument will be made on that point. However, the Splash Brothers got help from their bench just when they needed it.

Strength In Numbers might be a silly slogan, but the Warriors played like a complete team when they needed to, after being rattled most of the way by an improved and persistent opponent.

This was the bench — and the team — which won 73 games. Golden State’s strength was strong when it had to be.