All-Star Weekend is just about here, but while the NBA gears up for fun and festivities in Toronto, the serious business of the league — the occasion which demands our attention — is the upcoming trade deadline, February 18 at 3 p.m. Eastern time.

Plenty of assessments will be made in the past tense once deals are completed, but that’s the calm after the storm. What about the calm preceding the upcoming week of activity in the league?

Let’s offer a very simple two-part answer, one whose explanations shouldn’t be all that difficult to appreciate: This trade-deadline period should be marked by tweaks at the top (if anything), and unloading for the NBA’s underclass.

Let’s start with the latter half of that equation, because it’s the simpler part of the NBA’s overall landscape at this point.

The New Orleans Pelicans have been battered by injuries to the point that this season has lost whatever aspirational identity it might have once possessed. The Pelicans are clearly in a position to get rid of some of their veteran assets so that they can:

and B) free up resources to find better complementary parts for Anthony Davis.

The Washington Wizards and Houston Rockets expected to contend for the Western Conference Finals if not the NBA Finals at the start of the season. Washington’s season has been sidetracked by injuries to begin with, but the failure to win even 25 games by the All-Star break still represents an underachieving season. One would think it’s time for the Wizards to get a lot younger and more nimble in the frontcourt, to complement the way John Wall and Bradley Beal play. Trimming some fat and using the post-break months as a trial run would seem to be in the franchise’s best interests.

For Houston, it’s hard to deny the idea that the franchise needs to take a step back and rethink its vision. The Los Angeles Clippers were so very generous in donating the West semis to the Rockets last May, and in some ways, that gift was a Trojan horse. It enabled the Rockets to think they were better than they in fact are. This season has affirmed such an inclination.

Houston could fight for the No. 7 seed, one supposes, in the coming spring, but that would mean a date with the Spurs in the first round. For the Rockets, the idea of retaining a roster with plenty of veteran pieces makes little sense in the face of the fortress which exists in the West’s top four, which has separated itself from the lower four playoff teams and the rest of the conference.

The Utah Jazz have a young roster they don’t need to part with. They’re building for the future and have reason to be optimistic about what they can achieve in 2017 and beyond. For Houston, and also for Memphis and Dallas, there’s no bright horizon or new dawn. Those franchises need to re-imagine what’s possible and punt this season in service of the long view.

Now, let’s shift to the top tiers of each conference. Why, exactly, should tweaks (at the most) comprise the reactions of every team to the impending deadline? 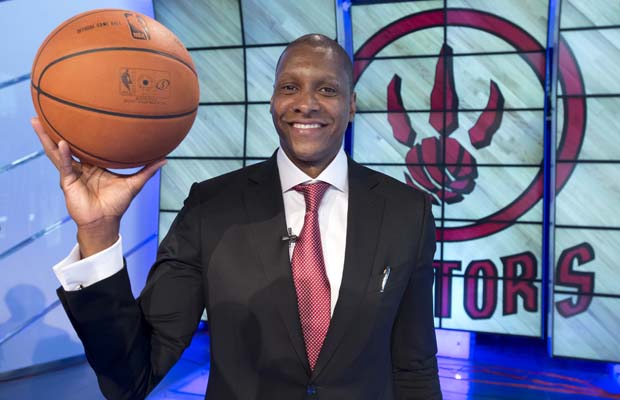 See that man above? That’s Masai Ujiri of the Toronto Raptors, hosts of the All-Star Game and close pursuers of the Cleveland Cavaliers in the Eastern Conference standings.

It is very tempting to look at those standings and say, “Well, Toronto should try to get the No. 1 seed if it can. This is a big window of opportunity for the Raptors.” In a vacuum, that statement seems entirely sensible.

However, a peek under the surface suggests that Toronto needs to be cautious and restrained in how it approaches what is a delicate situation.

The first thing to realize about the value of a No. 1 seed is that when LeBron is the 2 seed, he doesn’t lose. LeBron has won six Eastern Conference championships in his career, five as a 2 seed, only one as a top seed. The 2007 Detroit Pistons, 2011 and 2012 Chicago Bulls, 2014 Indiana Pacers, and 2015 Atlanta Hawks not only failed to beat second-seeded LeBron in an East Finals series (the 2012 Bulls never got there); they never even forced a Game 7 on their home floor, which is part of the point of having home-court advantage. (Interestingly enough, when LeBron was a top seed in 2013, his Miami Heat did force a Game 7 at home and won it.)

No. 1 seeds are overrated… at least when LeBron is the 2 seed in the East. That’s point one for Toronto.

Point two is this: The Raptors have never made an East Finals series in their history. As much as the Raptors might want to go for the brass ring, they haven’t reached certain lower thresholds in their relatively brief history. Before they try to win it all, or even the East, they need to win a couple playoff series — at least one. More specifically, they need to know that their current roster and coach can pass a few fundamental tests.

If Toronto tries to rework its roster with a three- or four-player trade which involves main-rotation guys, and the Raptors don’t get out of the second round, how can the organization identify if it’s fundamentally on the right track or not? This is the question the Raptors must honestly answer, and it’s why nothing more than a minor addition or subtraction on the margins of the roster is warranted in the next week.

The same holds true for the other teams vying for the third through seventh seeds in the East. Do you want to either go all-in on a short-term acquisition or blow up the roster, when the conference is so fluid and the 2017 season might offer a much better chance at a 55-win campaign and a real shot at the Finals, with LeBron one year older? Patience, and an accordingly light amount of (expansive) pre-deadline activity, seem to be in order. Large moves — unless they’re too good to be true, thanks to a stupid trading partner — are almost certain to be panic moves.

Then consider the West. One basic point overshadows everything else: Just because the Golden State Warriors can do something doesn’t mean everyone else should try to do the same thing.

It’s an honest inclination… but it’s not necessarily a proper one. Teams see one organization functioning at its height. The whole of a league would like to copy that blueprint, or find a bold counter-strategy to foil the best team in the sport. However, how realistic are those goals, at least within the current season?

Can a quick-fix or short-term acquisition meant solely for the 2016 NBA Playoffs adequately transform the West? If San Antonio, Oklahoma City, or the Clippers think they can make one move — for no more than one player — which would not disrupt their respective rosters, maybe that should be considered. An elaborate restructuring of a roster in order to pursue the Dubs? You can’t spell “dubious” without Dubs. Caution is warranted among the three immediate pursuers of the Warriors.

Let’s make a deal? Small ones at the top, fire sales in the lower tiers, and nothing for younger organizations which need to see what product they have before this season’s done.