In an area famous for seismic activity, there was an earth-shaking basketball game in Oakland Friday night.

It was a regular-season game, the 76th of the season for both teams. It didn’t get anybody into the playoffs or knock anyone out of the playoffs; in fact, neither team gained or lost any ground in the playoff picture in terms of seeding positions.

Yet, it was fascinating.

The Boston Celtics beat the Golden State Warriors, 109-106, bringing to an end the Warriors’ 54-game home winning streak, one that had spanned over 400 days. It also put in question the Warriors’ ability, or willingness (or both), to break the NBA record for wins in a season, something they now have to go 5-1 to do. For some reason, going 5-2 looks a lot more doable than 5-1, especially when you have two games left against the San Antonio Spurs.

The Warriors’ home winning streak, and their chase for the Bulls’ record, hung over the proceedings like a thundercloud, one you couldn’t stop watching because it had the potential to unleash a lightning bolt at any second.

Steph Curry had five turnovers…in the first seven minutes of the game!

The night in Oracle Arena made clear that the loss of Andre Iguodala, which the Warriors have survived as far as wins and losses (9-2) are concerned, has had a substantial impact on this team. The Dubs have been a high-wire act ever since he got hurt, winning games late in the fourth quarter, instead of in the first half or third quarter as they routinely did before. Friday night, Iggy would have calmed down their offense and provided the kind of perimeter defense they needed to keep the Celtics from answering every Warrior basket in the third quarter.

All of this was relatively interesting, but perhaps the greatest thing this game accomplished is that it set up another regular season game that might even be more interesting. 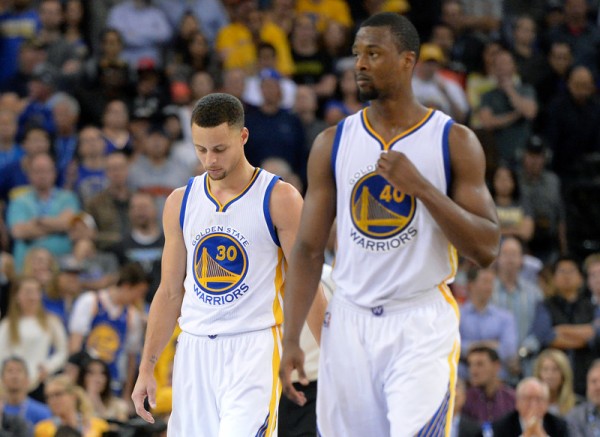 Golden State Warriors guard Stephen Curry (30), left, and forward Harrison Barnes (40) both walk off the court during a timeout while trailing to the Boston Celtics in the fourth quarter of their basketball game at Oracle Arena in Oakland, Calif., on Friday, April 1, 2016. (Doug Duran/Bay Area News Group)

On April 10, the Warriors will go to San Antonio. They will likely have locked up the Western Conference’s top seed by then, but unless they lose two games between now and then, they will be playing to either tie or break the wins record.

If that’s not interesting enough, it will also be a chance for them to hang a loss on the Spurs on their home floor. While the Warriors may have expressed ambivalence about their home winning streak ending the other night, I can’t imagine they would want the Spurs to run the table and be the first team to go 41-0 at home in the regular season.

Here’s where they have an interesting choice to make, though. The Spurs, having the No. 2 spot in the West locked up, can come into that game rested and ready. They have three roadies before then, including one in Oakland, that don’t really matter to them, although the Jazz are pushing for playoff position. The Spurs’ one in-season milestone to shoot for is the 41-0 home record. They can downshift on the road and load up for April 10 versus Golden State. The Warriors, however, may continue to play all-out for the Bulls’ record, home and away, which would bring them into the Alamo City pretty stressed out.

If, on the other hand, the Warriors look at that loss to the Celtics and say, “Whoa, we’ve got to get ourselves right for the playoffs,” they could be mentally refreshed. The Warriors could retain the mindset needed to end the Spurs’ home winning streak. That said, a road trip to Memphis the night before on April 9 will work against them.

Interesting? I thought you’d think so.

Steve Kerr’s comments the day after the loss to the Celtics were pretty clear about which direction he’d like the team to go, although he’s maintaining his stance of allowing the players to make the call. He said that “championships last forever, records are broken.” That indicates that he has some level of concern regarding the impact the record chase is having on their eventual readiness for the playoffs.

My prediction is that the Warriors are still going to try to win every game, but that you will see the minutes reduced for Steph Curry and Draymond Green over the next few games. Those are the two players who seem to me to be showing the most signs of wear. Klay Thompson has an almost robotic nature that serves him very well as the season winds down, and Harrison Barnes missed two months of the season, so he’s good. His legs will be there. As I wrote last week, the injuries to Iguodala and Festus Ezeli have somewhat tied Kerr’s hands as far as enabling players to sit out entire games.

The best way to juggle these competing tension points is as follows: The Warriors will tie the Bulls’ record if they win every remaining home game. They can afford to lose once — but only once — on the road. The April 9 and 10 back-to-back versus Memphis and San Antonio will probably determine how this story unfolds. A win in Memphis on April 9 means the Warriors could rest everyone for the Spurs on April 10. A loss in Memphis would likely push the Dubs to go all-out in San Antonio the next night.

One more point to consider: The Warriors have two nights off between the visit to San Antonio on April 10 and the season finale against Memphis on April 13 in Oracle. The Warriors would then have at least two days off, probably three, before Game 1 of their first-round series on the weekend of April 16-17. They might be worn down, but they’ll have chances to rest next week.

Now, a final word about performance and in-game habits:

As San Francisco Chronicle columnist Bruce Jenkins wrote, the Celtics’ loss could have very positive ramifications for the Warriors if they get the message that 22 turnovers will not get it done. They may find that without taking their foot off the gas a little bit, they can’t keep it on the road, and then they’ll have to decide what to do. They will play with great intensity Sunday night, that’s for sure. They don’t want to lose two in a row at home, and Portland could wind up being their first-round opponent.

A loss has simultaneously complicated the Warriors’ attempt to juggle a pursuit of history with player management for the long game that is the playoffs. Oracle Arena’s aura has been punctured to an extent, and yet this could liberate the Warriors for the next few months.

It is all shaping up to be very interesting, don’t you think? This three-point loss to the Celtics really was, with apologies to Dos Equis, “the most interesting loss in the world.”

We’ll see how costly or beneficial it is in the course of time.