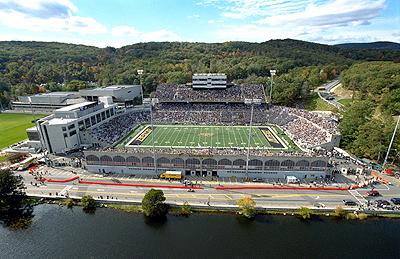 My name is Joshua Guiher, and I normally write over at my site, CollegiateStadiums.com, where I blog about my sports travels, particularly my attempt to see a game in every FBS stadium and bowl stadium. Of course I cover general college football news as well, but the real focus is on all of the amazing things I have experienced traveling to various events.

Since this is favorite’s week at Crystal Ball Run, I’m glad the guys are allowing me to share my favorite stadium, Army’s Michie Stadium. While Michie Stadium is far from the newest, biggest or flashiest stadium in FBS, the experience is among the best you will find in the country. Hopefully you all will provide me some feedback and the guys will allow me to preview a different stadium I have attended each week throughout the season.

*The playing surface is called Blaik Field, named after Earl “Red” Blaik who led Army to three consecutive national titles in 1944, 1945 and 1946.

*While Army is called the Black Knights, their mascot is actually a mule.

If you like sideline seats, look for tickets in sections 9-16 (upper level is U9-U16) for west side seating or sections 26-31 on the east side. End zone seats are sections 1-4 and 21-24, while other sections are in the corners.

Concessions are fairly basic, with a good number of stands under the east side seating. Pricing is good and you can’t really go wrong with the standard hot dog.

This is what makes a game at Michie Stadium. Get there early and pay attention to the schedule of pre-game activities. Most games are at noon, with the cadet review beginning three hours before the scheduled kickoff at the plains. After this, the Black Knight walk begins approximately two hours before kickoff.

Of course, if you just want to spend a little time tailgating first, arrive at the game a little early and check out the Black Knights Alley, which is at Gate 2 outside the east side of the stadium. Quite honestly, most fans seemed to be so wrapped up in the festivities and drinking there, that they barely made it to their seat in time for the cadet march-on. The march-on occurs 20 minutes before kickoff right after the band takes the field and is truly one of the most spectacular pre-game ceremonies you will see at any sporting event. Of course, since this is the Army, there is also a parachuting demonstration to finish the pre-game activities.

You can tailgate in your normal parking spot, but if you want to go all out, then contact Maria Tamburro at 845-938-0389 as Army offers premium tailgating as well. The staff will actually help you get a prime parking spot, and even help you secure necessary supplies such as tents, grills, tables, linens, catering, etc.

During my visit to Michie Stadium, I can’t say that the fans were more than average in terms of atmosphere and how they reacted to the game. Of course, the team wasn’t very good that year, giving up 49 points the day I was there. I will say that they stayed for the entire game and were kind enough not to boo Matt Millen when he took the field during pre-game festivities.

I recommend that you try and learn the one or two of the team songs, particularly the USMA Cheer or the Rocket Yell as you will hear them quite often throughout the game.

Also, be sure to pay attention to the cadet sections, as they will provide most of the energy for the stadium. I swear, the team could be down 80 points and the cadets would still be giving their all to cheer on the Black Knights.

If you are looking for a souvenir to take home, then head to the area around Gate 1, and look for the table. They don’t have the largest selection, but some of the sweatshirts are really good quality for the price.

If you are the type of person who wants to have a ticket in hand before making a trip, then just visit GoArmySports.com or your favorite online reseller and buy your tickets.

Ok, this is another reason to arrive early and you need to plan ahead. Parking is $15 if you purchase it ahead of time or $20 on game day. Also, anyone 16 or older must have photo ID and check in at the booth in order to gain admittance to the West Point campus. If you don’t have ID, you are not getting on the base, period. The entire process from when you arrive at the main gate to when you get parked takes about an hour on average so please, arrive early!

For parking, be sure to print off this map. Personally I parked on Howard Road just so I could take a nice walk across the base to Michie Stadium and enjoy the day. As you can see, there are plenty of options with some of the lots also offering a shuttle service right to the stadium.

Alternatively, Amtrak does service the West Point area, and I saw more than one person arriving via cab. If you prefer to fly, the closest airport is Stewart, but the stadium is not too far from JFK, LaGuardia and Newark if you are renting a car.

Since West Point is just outside of New York City, finding a hotel is very easy and isn’t something that needs to be booked too hard in advance. Just use your favorite online travel site and find an appropriate place to stay.

The official hotel of Army athletics is Hotel Thirty-Thirty in Manhattan, but it is my understanding that they don’t offer any real discount for those attending the game.

Again, West Point is different from the average college campus. It is a military base, so you can’t just walk a few blocks and find a bar or restaurant to hang out at. I suggest that you head back down Interstate 87 back to the town of Harriman and eat at one of the many local restaurants. Personally I recommend Angelo’s, a nice Italian restaurant, although they do not allow children from what I have been told.

You can’t go wrong just walking around the base, exploring all of the statues and historic buildings, while enjoying the picturesque fall foliage. There is something awe-inspiring just getting the stand in some of the same building that US military hero’s, such as George Washington, did.

If you want to dig even deeper into this history, be sure to visit the West Point museum, which is also on the base. The museum is open daily from 10:30am to 4:15pm except for certain holidays so you likely will have to go on Friday or Sunday if you are in the area for the entire game weekend.

I don’t know anyone who has been to Michie Stadium and didn’t thoroughly enjoy their experience. Mel Kiper Jr. describes the game day atmosphere at Michie Stadium “as among the most inspirational in the country” while both Sports Illustrated and The Sporting News rate the game day experience in their respective top 10 lists.

You should leave West Point with a new appreciation for how the cadets manage to balance their military obligations with Division I athletics, always playing to the best of their abilities.