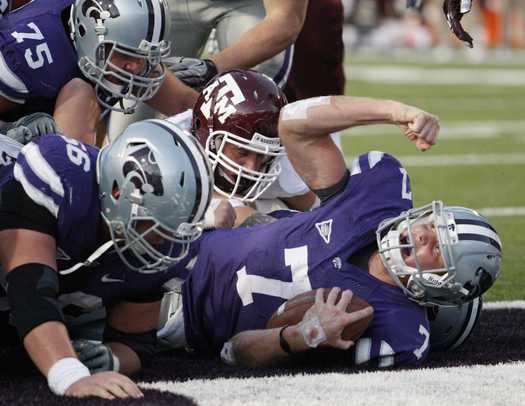 The pool of Heisman Trophy candidates at this point in the season is full of familiar names: Stanford quarterback Andrew Luck, Oregon running back LaMichael James, Alabama running back Trent Richardson.

However, if you’re looking for the one player who means the most to his team, what about Kansas St. QB Collin Klein?

Klein continued his poor man’s Tim Tebow act Saturday versus Texas A&M, leading the Wildcats to a thrilling 53-50 win over the Aggies in quadruple overtime. Klein put on a one-man show on offense, racking up 103 yards rushing on 35 attempts and – count ’em – 5 touchdowns on the ground. He was coolly efficient throwing the ball as well, completing 17 of 27 attempts for 281 yards with a touchdown and an interception.

With KSU’s rushing attack otherwise bottled up, coach Bill Snyder called Klein’s number repeatedly on key plays, including in the four extra frames after regulation ended in a 31-31 tie. Klein bullied his way through the A&M D in short-yardage situations. He also made improvisational plays with his feet when the passing game broke down, including a 25-yard scoring scamper in overtime.

On the year, Klein has run for 1,009 yards, averaging 4.2 yards per attempt, and 24 touchdowns. He also sports a solid passer rating of 127.1. The talent surrounding Klein is nothing really close to what he has seen against teams like Oklahoma and Miami. And yet, at 8-2, his team sits on the verge of the top 15 and a third-place finish in the Big 12. (KSU in the Cotton Bowl?)

One of the teams that supposedly has the Wildcats outgunned in the personnel department is the one that lost in Manhattan yesterday. Back in College Station, you can bet that plenty of Aggie aficionados are approaching the end of their rope with coach Mike Sherman.

Sherman bought himself a reprieve with 2010’s 10-3 season, but he and his team clearly used up whatever magic they once had last season. In running their record to 5-5, the Aggies have shot themselves in the foot so many times that they’ve blown those suckers clean off.

A&M’s five losses this season are in one sense a function of playing the country’s most difficult schedule. Four of the Aggies’ five defeats to this point have come at the hands of top-20 teams Arkansas, Oklahoma, Oklahoma State and Kansas State. Missouri is no slouch, either.

The problem is the way they’re losing, though. Sherman’s team has gagged up three significant second-half leads. Defensive coordinator Tim DeRuyter received plaudits and head coaching offers last offseason for his apparent impact on A&M’s maligned D. This season, he’s learning what life is like without an elite talent like Von Miller, and his unit is perpetually folding. Likewise, once considered once of the best QB prospects in the 2012 NFL Draft, Ryan Tannehill has failed to match his strong fill-in performance from last year, showing notable deficiencies in decision-making and reading defenses.

With A&M heading to the SEC next year, the school’s athletic department will undoubtedly be giving some thought as to the idea that a fresh start with a new coaching staff may be warranted.

Still, despite the potential upheaval in Aggieland, this particular game belonged to Klein. Yet again, he demonstrated that he’s the driving force behind what is easily the nation’s most overachieving team.