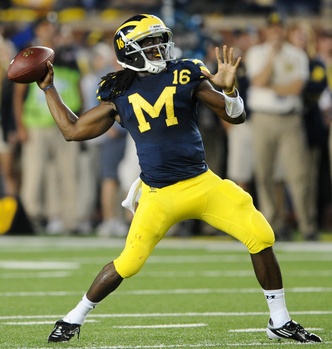 Michigan has not had to rely on its defense. It has not tried to. Not with Denard Robinson putting up video-game type numbers and his ability seemingly to score at will. The defense, if anything, was holding the Wolverines back and keeping them from taking advantage of Robinson’s offensive prowess.

To get to 6-0 and to begin making believers out of those who are not quite sure what to make of Michigan, the defense needed to step up and make plays, putting the ball in its offense’s hands. And in the Wolverines’ first road game of the year and a game Wildcats’ team with some offensive weapons, it would not be easy to finally prove the Wolverines had a top-level D.

Michigan may not have a defense at the top of the nation (as the team’s statistics may have indicated entering the game), but it is no pushover. Especially when backed with Robinson and that offense.

The Wolverines forced two critical turnovers to turn a 10-point halftime deficit into an 18-point advantage. Michigan outscored Northwestern 28-0 in the second half, forcing a critical interception on a Dan Persa-to-Drake Dunsmore pass and a fumble from Jeremy Ebert on a first down gain, which all but sealed Northwestern’s fate.

Denard Robinson did the rest, recovering from three first half interceptions to throw for 325 yards and rush for 117 more. He added two rushing touchdowns and two passing touchdowns to cap off the victory and move the Wolverines to 6-0.

Northwestern certainly pushed Michigan in the first half to build a 24-14 lead at the half.

Dan Persa looked every bit the first-team all-Big Ten player of 2010. He had the Wildcats moving at their typical brisk pace and put the Wolverines on their toes. He was equally deadly at quarterback, passing for 335 yards and completing 32 of 43 attempts.

The Wildcats let Persa take control after getting his feet wet in his first game back from a ruptured Achilles tendon last week at Illinois and with starting running back Mike Trumpy out for the year with a torn ACL.

The Northwestern defense that got torn up through the air against Illinois had its shaky moments. But with Robinson throwing jump balls, Northwestern’s secondary was able to get three interceptions and convert two of them into points. It helped as the Wildcats bent, but did not break.

This game turned out to be very much like that loss to Illinois for Northwestern – a loss the Wildcats suffered after leading 28-10.

Michigan scored on the opening drive of the second half to cut the lead back to three. The Wolverines then sacked Persa on second down and forced a three and out. Robinson marched down the field and gave Michigan the lead for good.

Northwestern got another chance to try and get back into the game, but Persa’s pass to Dunsmore was tipped and intercepted. Michigan answered with a score. The Wildcats started driving again when senior Jeremy Ebert put the ball on the turf. Another score ensued.

At long last, Michigan’s defense came up with the big plays to support an offense that slowly wore down Northwestern on the ground and took advantage of a soft secondary.

Road test passed. And surprisingly perhaps, Michigan is halfway to an undefeated season, Robinson somewhere in the midst of the Heisman discussion.