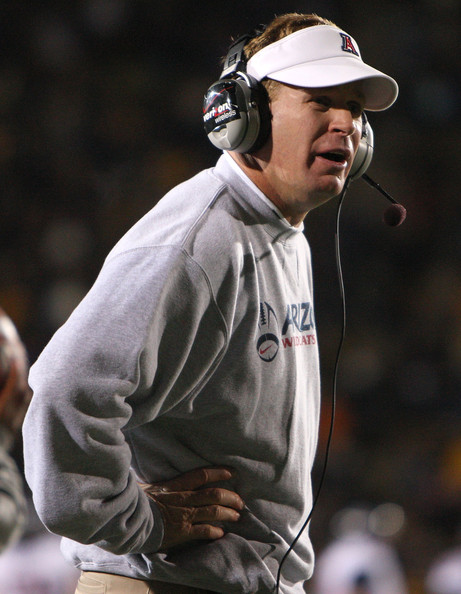 It appears as though college football’s coaching carousel started a little early this season. At least according to reports on Monday night that Mike Stoops has been fired as the head coach at Arizona.

The news was first reported by the Tucson Citizen:

Defensive Coordinator Tim Kish will lead the team for the remaining six games on the schedule.

As things stand, the team is now 1-5 in 2011, with their sole win coming against FCS school Northern Arizona to open the season. Dating back to last season, Arizona has 10 straight losses to FBS teams, after losing five straight to close out a highly disappointing 2010 year. A season which started 7-1 and saw the team get to as high as No. 15 in the polls in the first week of November, ended with a 36-10 beat down in the Alamo Bowl courtesy of Oklahoma State.

At the same time, it’s hard to totally put the blame- especially this year- on Stoops either. Yes, the team is 1-5 in 2011, but upon close inspection of the schedule, most all of those losses are understandable, even if the final scores weren’t excusable. The Wildcats have lost to three of the Top 10 teams in college football, falling at Oklahoma State, and in Tucson to Stanford and Oregon. A fourth loss was by just one touchdown to a USC team which is now 4-1. If anything, the schedule makers had as much to do with Stoops’ problems as anything else.

Looking deeper, the problem was of course two-fold. The first isn’t so much that Arizona lost those games, but more importantly, how they lost them. In the three losses to the ranked teams, Arizona was simply beat down, getting outscored 130-56 against those clubs. On the season, Arizona is ranked 117th nationally in scoring defense, allowing 37 points per game. Only UNLV, New Mexico and Kansas are worse. Needless to say, that is not company that you want to be in.

Of course while losses to Oklahoma State, Stanford and others are excusable though, the one that Stoops and the Wildcats suffered Saturday in Corvallis, Oregon wasn’t. Arizona lost 37-27 to an Oregon State team which entered the game 0-4, including a defeat at the hands of the mighty Sacramento State Hornets. For those scoring at home, that would be the same Sacramento State team that is currently sitting at 3-3 in the FCS level, with losses to Southern Utah, Weber State and Montana State. Egads.

Beyond the ugly defeats though, the question has to be asked: Was this the right move for Arizona? At least right now?

Yes the recent record is bad, but given the tough early schedule, and given that last year was a historically strong season in the, then Pac-10 (Stanford and Oregon combined to go 24-2 on the season), was it totally fair? This is total conjecture, but had Arizona opened Pac-12 play with say, UCLA, Colorado and Washington State instead of Oregon, Stanford and USC, would Stoops still have his job? Considering that the administration won’t hire a new coach until the off-season, couldn’t they have waited to see if Stoops could turn things around against a much more manageable second half of the schedule?

More importantly, what exactly does Arizona plan to do from here? Simply put, Arizona is not a major power in the hierarchy of the Pac-12, let alone nationally in college football. The Wildcats were just 2-10 in the season prior to Stoops’ arrival, and hadn’t played in a bowl game in 10 years before he took them to the Las Vegas Bowl in 2008. Beyond that, Arizona had only gone to three straight bowl games once in the entire program’s history before Stoops took them there from 2008-2010. Even if Stoops might’ve worn out his welcome- and he did- it is entirely plausible that whoever comes to town next will end up less successful than the guy he replaced.

As for what is next for Stoops, it’s tough to say.

Because of his personality on the sidelines (which at best would be described as “volatile,” and at worst as “terrifying,”) it’s hard to see him ever being a head coach again. But with a very solid record as a defensive coordinator (he held the title at Oklahoma when they won the 2000 BCS National Championship), it isn’t inconceivable to think that he’ll gain that title at another school. As my colleague Allen Kenney pointed out to me this evening, it seems like current Oklahoma coordinator Brent Venables is due to get a head job somewhere soon. Could Mike Stoops replace him in Norman?

Ultimately only time will tell what will happen for both the school, and their now former coach.