Our man Josh Guiher of CollegiateStadiums.com is back, with another stadium review and guide.

After breaking down Army’s Michie Stadium earlier in the season, Josh now turns his attention to the other end of the Commander In Chief’s Trophy and Navy-Marine Corps Stadium, which gets sets to host the exciting Air Force-Navy game Saturday afternoon.

Located in picturesque Annapolis, Md., Navy-Marine Corps Stadium itself is nothing spectacular, but the entire aura is top-notch. Just like a game at Army, I don’t see how you could not be amazed by what the athletes go through to be able to compete. The game this Saturday against Air Force will only add to the mystique.

The seating at Navy-Marine Corps Memorial Stadium is all chair-back except for the general admission hillside. Don’t try to figure out the numbering of the sections as you will drive yourself crazy. The sections are 1-8 and 101-108 on the press box side and 25-32 and 125-132 on the opposite side. Then the end zone sections are A-D on the hillside and the suites are E-H.

The only areas I would try to avoid would be the lower couple of rows toward the end zones just because of the angle. I sat in section 32 down by the field and I could see everything except for a small corner of the opposite end zone.

If you want to check out the seating chart, here is a link.

I enjoyed the concessions at Navy. There was a lot to choose from and you even got a side with some of the sandwiches. For instance, I got a BBQ pulled pork sandwich, a 4 oz. side of potato salad and a 32 oz. soda all for just $8. If you walk around the stadium, they have various concession stands that sell a nice variety of foods, including a decent cheesesteaks.

One thing you need to watch for at Navy-Marine Corps Memorial Stadium is the “March-On,” which starts one hour before the game. The Midshipmen all march into the stadium and file into their seats from the field, a true college football spectacle.

The postgame singing of Navy Blue & Gold is just as important.

The tailgating around the stadium was more of a backyard gathering with lots of grilling, socializing and responsible drinking, rather than the excessive alcohol consumption that seems to be the norm around the country.

The parking lots basically surround the stadium and are pretty easy to get into. (For a full map, click here.) Just be sure to pre-purchase your $20 parking pass or you 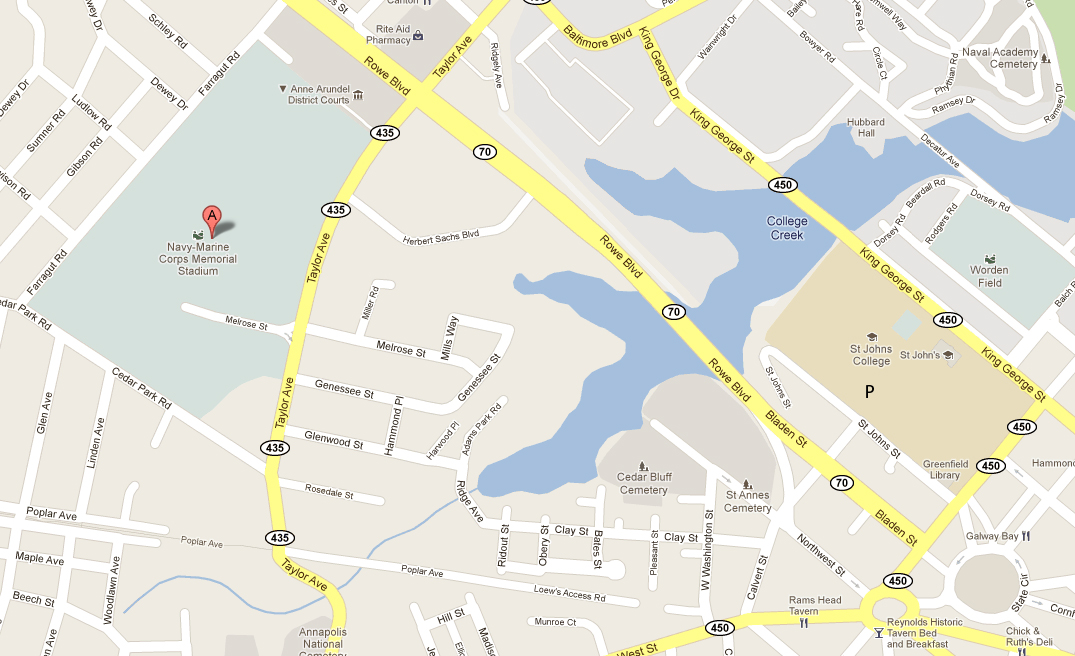 can’t park at the stadium. If you follow the link, there are also a few off-site parking lots you can use. However, not mentioned is my favorite place to park, which is at St. John’s College, and you can walk about ¾ of a mile to the stadium from there. In fact, to the right is a picture of where I parked.

I really enjoyed the fans. They were knowledgeable, friendly and were really enjoyable to be around. What I liked most was the majority of the fans I talked to had all served in either the Navy or the Marines, which I felt gave them a very tight bond and loyalty to the team.

Also, even though Navy was up by 14 points with less than four minutes to play, all of the fans stuck around, which turned out to be a good thing since the game got exciting at the end. Central Michigan scored twice and only a failed two-point conversion on an attempt to win in regulation allowed Navy to finish off the win.

Tickets are $20 for the general admission seats and $35 for the rest, but it was very hard for me to find one to scalp at the stadium. I finally was able to find a group who had a no-show, but it took a lot more effort than I am used to. Therefore, I suggest you think ahead and don’t wait till you are at the stadium.

Annapolis is easy to get to, just down Interstate 97 from Baltimore and Route 50 from Washington. There is also a park and ride option and a public transportation option, which are both outlined in the parking guide linked above.

If you are flying in, you wind up with BWI airport probably being your best option, but Dulles or Reagan airports are also within an hour.

Hotels around the suburbs of Washington and Baltimore should be easy to find. Look for something in the Glen Burnie or Odenton areas for something close but at a normal rate. In the link below, there is a list of the Navy-recommended hotels, but they all seemed to have increased rates, so it was better travel 45 minutes to save $50-100.

Downtown Annapolis is beautiful, and you should make sure you walk around and explore the area. The Navy fan info guide has a great list of the local restaurants. Based on the recommendation of Patrick Stephens (@D1scourse) of the Washington Post, I ate at the Federal House Bar & Grille and highly suggest you do the same.

If you like to go main stream, then there is a Chick-fil-A in the area as well.

You obviously are going to want to visit the Naval Academy base. There is a walking tour you can take, but for some reason it wasn’t going on the day I was there, so be sure to make plans ahead of time.

Another option is the Pirate Adventures on the Chesapeake, which is a cool experience, especially if you have kids. They sail on most Saturdays and Sundays in the fall, but be sure to book your adventure ahead of time.

Despite the stadium being small and older, I enjoyed my visit to Navy-Marine Corps Memorial Stadium and I am certain that you will too. It is a look into the true purpose of college football.