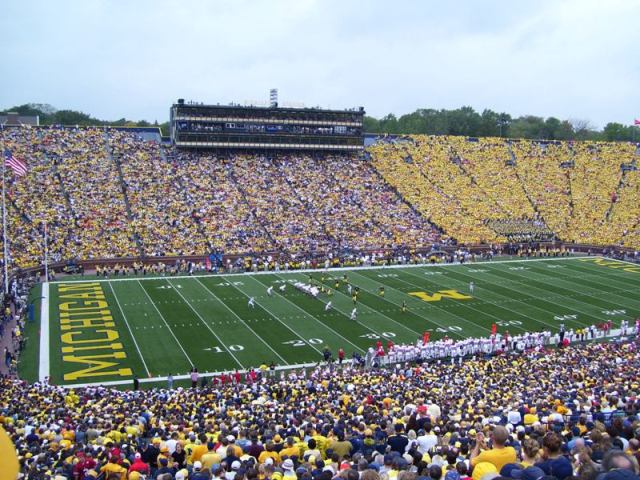 Joshua Guiher is a college football fan whose goal is to visit all 120 FBS football stadiums. He will be writing a weekly column for Crystal Ball Run, highlighting a different stadium he has visited each week.

Josh’s first piece on Michie Stadium can be read here and he returned last week to share his take on Notre Dame Stadium as well. To read the rest of his work, please check out collegiatestadiums.com. You can also follow him on Twitter @collegiatestdms.

Today, shares with us everything we need to know about Michigan Stadium, as “The Big House,” gets set to host their first night game against Notre Dame.

* Michigan Stadium has an official capacity of 109,901
* Michigan Stadium hosted the largest paid crowd to ever see a college football game on September 4, 2010 against Connecticut when 113,090 fans showed up
* Michigan Stadium will host its first every night game this weekend versus Notre Dame
* During construction, a steam shovel sank into the soft ground and is still buried below the playing surface
* Official capacity always ends in a “1” because one seat is reportedly always saved for Fritz Crisler, although the exact location of this seat is a secret
* Michigan actually had 10 live Wolverines that were kept at the Detroit Zoo, with two (Bennie and Biff) brought to the stadium in a cage each game day as part of the pre-game ceremony, but this was stopped after just one year (1927).

Michigan Stadium is basically a big bowl dug into the ground, with only the top few rows of the stadium above ground. Seating is bench style and the distance between seats is very small, resulting in some of the tightest seating in the country.

Personally I would avoid seats in the first few rows as they can be so low that the players and television cameras will block your view of the game. Also, since the stadium design is a bowl, if you have the lower seats you will have to climb almost 90 rows to get back out to use the restroom, grab a bite to eat or leave.

The most recent expansion added both indoor and outdoor suites that really changed the look of the stadium, while adding some more spacious seats for those who can afford the suites.

For those interested, the seating chart is available here and a stadium map here.

Basically, the design of Michigan Stadium means that all concessions are located at the top of the stadium, outside of the seating. This means that the number of concession stands is small, especially considering that Michigan Stadium is the largest in the country, leading to long lines. Some concessions were added during the most recent renovation, but I still recommend that you eat before showing up to the stadium.

The entire Michigan program oozes tradition, but be sure to get to the game a little early and check out the Michigan band, truly one of the best in the country.

The team also runs under the “Go Blue” sign as they enter the field, one of the most famous team entrances in college football.

There is plenty of tailgating that occurs at Michigan on game day, so be sure to bring along some of your favorite beverage and some food.

Most people park on the golf course, which can be accessed from three different sides from either Stadium Boulevard, State Street or Ann Arbor – Saline Road. There are plenty of other lots as well, but you will need the proper parking pass. For more parking information, check out this link.

I personally recommend that you don’t drink too much before the game, because if you looked at the stadium map link above, you will notice that there is a major shortage of restroom facilities, so you will miss large portions of the game if you need to use the bathroom.

I enjoyed the fans during my visit to Michigan Stadium. In fact, I found the fans to be quite passive for being the largest stadium in the country. We had an incident free visit and everyone was very polite even after Michigan won on the last play of the game, ending Penn State’s unbeaten season.

The fans were fairly well educated on the rules of the game and didn’t boo too much beyond obvious situations.

Tickets for a game at Michigan Stadium can be expensive on the secondary market and darn near impossible to get through the school.

You are likely going to need to resort to a site like StubHub to find tickets. I recommend that you try to avoid seats in the corner sections if possible (5-10, 14-19, 27-32 and 36-41) because the angle of the view is not very good.

The easiest way to get to Michigan Stadium is to drive in on Interstate 94 and take exit 177, which is State Street and follow it right to the golf course parking.

If you are staying downtown, then you can take “The Ride” a public transportation shuttle service run by the Ann Arbor Transportation Authority that costs $1.50 each way with plenty of pickup and drop off points around town. For a full look at the schedule, ticket information and stop locations, click here.

There is an airport in Ann Arbor, but flying into Detroit is going to be a much cheaper option, even after factoring in a rental car.

If you are going to use the ride program mentioned above, then you might as well stay in one of the hotels that have a stop right outside. The list of hotels is wide ranging from economy to luxury so just pick one from the list in the link above.

If you have trouble finding a room in Ann Arbor, or at least an affordable room, check out some of the western Detroit suburbs. You should be able to find an affordable room within a 30 minute drive of Ann Arbor without much trouble.

Ann Arbor is not the nicest town, but it is far from the worst. If you walk around, you will find plenty of eclectic shops and some nice local restaurants.

Personally I spent more time on campus as the architecture was amazing, but we did enjoy eating at Krazy Jim’s Blimpie Burger at the corner of East Madison Street and South Division Street.

If you are looking for more food options, try checking out the few blocks around Main Street and Liberty Street.

If you want to explore something outside of campus and the athletic facilities, try taking a visit to the Ann Arbor Hands-On Museum if you have kids. For more information, visit their website.

Another option is to take a visit to the Matthaei Botanical Gardens, a beautiful nature area that is worth the visit. Admission is free, but there is a donation box if you would like to help support the gardens.

Be sure to check in next week, as Josh takes his talents to South Beach, and previews the site of the Ohio State-Miami game!