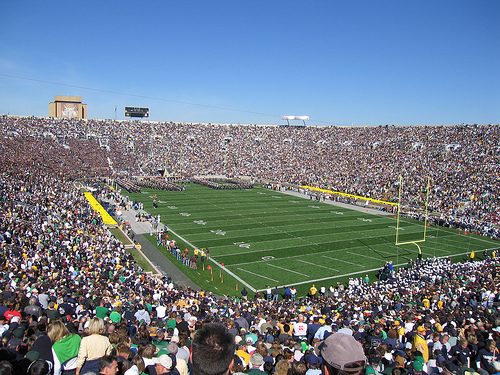 Joshua Guiher is a college football fan whose goal is to visit all 120 FBS football stadiums. He will be writing a weekly column for Crystal Ball Run, highlighting a different stadium he has visited each week.

To read Josh’s first piece for CBR on Army’s Michie Stadium, click here. To read the rest of his work, please check out collegiatestadiums.com. You can also follow him on Twitter @collegiatestdms.

Today, he looks at the hallowed grounds of Notre Dame Stadium, as the Irish get set to host the South Florida Bulls in the opener of the 2011 season on Saturday.

Seating in Notre Dame Stadium is bench style, with slightly less room between seats than most stadiums. While the stadium has some sections that have nicer benches, a good portion of the benches are old wood, likely dating back to when the stadium was built. Do not expect to be overly comfortable in your seat. I also joke that the wooden bleachers we sat in were so old that they were probably the same bleachers run on by Knute Rockne’s players when they got in trouble.

Another thing you’ll notice if your seats are in the corners of the upper sections (100’s) is that the sections don’t line up with the lower sections and the upper sections are not labeled well. You can see what I mean by looking at the seating chart here. It makes it very difficult to find the proper section for your seat. Probably 80 percent of the people in our section had to ask for assistance or originally sat in the wrong seat, something that could be fixed with better signage.

Notre Dame has a wide variety of concessions, with everything from traditional stadium fare to carving station delis and chocolate stands. The prices are a bit high compared to the other college stadiums in the state, but not so high that you feel like you are at Yankee Stadium.

If you want a full map of the concessions for both levels click here.

Traditions (What To Watch For):

One main attraction that should draw your attention when you walk in the stadium are the statues at each gate. At the North Gate, you will find a Knute Rockne statue, Gate B has an Ara Parseghian statue, Gate C has a statue of Frank Leahy and a statue of Lou Holtz. Trying to get a picture of each will take you a while so plan accordingly.

The band is OK, but not something that is an absolute must see.

Parking at Notre Dame is $40 at a nearby golf course and $25 at the auxiliary lot that requires you to ride a free shuttle to the game. Therefore, if you are traveling with multiple people, be sure to carpool to avoid paying too much as $40 is a bit excessive.

We parked a lot cheaper at St. Mary’s College and walked along St. Mary’s road through the campus to Notre Dame Stadium.

Also, as I mentioned above, the campus is an alcohol-free zone, as are some of the parking areas at the various local colleges, so be sure to check out the parking map and the Notre Dame tailgating rules for further clarification.

As noted in the quick facts, the stadium is packed for every game. The fans are loyal, but something I noticed was that a good number of them seemed like it was their first visit or at least in a few years. It almost seemed as though Notre Dame sells out every game but the fan base is always changing. That is obviously unlike some stadiums, where the same people sit next to each other year after year and the conversations become part of the atmosphere.

That isn’t to say Notre Dame doesn’t have fans that show up every game, just that they have a higher than average number of fans who don’t come very often, yet they still sell out.

Tickets can be hard to find as Notre Dame has a policy of revoking the season tickets of anyone who is caught re-selling tickets. This leads to a smaller and higher-priced secondary market. I recommend you try out StubHub, since if there are any problems, you at least get your money back.

Notre Dame is pretty easy to get to if driving, as South Bend is right off of Interstate 80/90. There isn’t much need to explain any other roads, as the traffic backs up right to the Interstate. Just follow the main flow of traffic and you’ll be fine.

If flying, try coming into Indianapolis or if flying Southwest Airlines to Chicago-Midway and drive to South Bend, rather than going to the more expensive South Bend airport.

If you would like to take a train, you can take Amtrak from Chicago to South Bend on the Lake Shore Limited route.

Hotel prices in South Bend can skyrocket on game weekends, so be sure to check out the surrounding areas if you want to stay cheaper. Elkhart, Ind., and Niles, Mich., are two close areas that usually have much cheaper rates.

Your weekend should start at the College Football Hall of Fame, located just a few miles from Notre Dame (although 2011 is the last year that the hall will be located in South Bend before it moves to Atlanta).

The traditions start on Friday, when they have “tunnel tours” where you can walk through the same tunnel to the field that the players do on Saturday and you can take any pictures you want. It is open from 10am – 2pm, except if the visiting team is going through their walk-through.

On Fridays, you can also take a guided tour by showing up at the Eck Student Center for the tours that begin at 10am, 1pm and 3pm. Otherwise, print off a campus map, and give yourself your own tour. Be sure to check out the Basilica, “Touchdown Jesus” and other famous buildings in the area. But again remember, the campus is an alcohol-free zone, even on game day.

My expectation going into my Notre Dame was for my visit to be one of my greatest ever to a college football stadium. While it was a good visit to a historic stadium, it did fall a touch short of my expectations. A lot of popular websites and publications usually rank Notre Dame Stadium in the top five college football experiences. I think when I am finished with my entire stadium tour, Notre Dame Stadium is more likely to finish between 12th and 15th. An experience in the top 10 percent, and one that you will certainly enjoy, but nothing Earth shattering.

To read Josh’s first piece for CBR on Army’s Michie Stadium, click here. To read the rest of his work, please check out collegiatestadiums.com, and also follow him on Twitter @collegiatestdms.