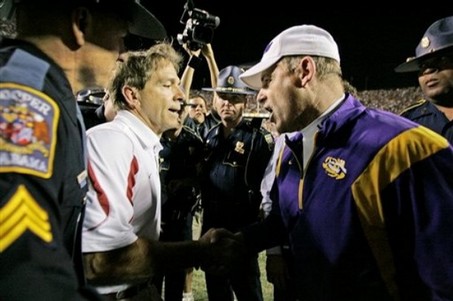 For those of you who are regular readers of Crystal Ball Run, you know that every Friday afternoon, our staff makes their picks on the biggest games of the week, in a segment we like to call “The Dirty Dozen.”

But with this weekend’s mega-showdown between LSU and Alabama, we decided to break the preview down into two parts.

Later on this afternoon, you’ll see our staff picks on the rest of college football’s biggest games. But right here, right now, we give you a bonus edition of the “Dirty Dozen” as each of our writers shares their thoughts on LSU-Alabama.

Allen Kenney’s Take: Damn is this game ever hard to predict. I’ve been back and forth on it all week.

Both of these teams predicate their offenses around establishing the running game. Both also excel at stopping the run. In that sense, both teams will have to get out of their comfort zones a bit to find a way to win.

I’ve been leaning to LSU for the simple reason that the Tigers have shown a better ability to hit big plays in the passing game. Both of these teams are so strong inside the box that the team that can loosen up the other should get a big leg up. Rueben Randle is averaging nearly 20 yards per catch, and Russell Shepard also has some big play ability. The Crimson Tide have solid options at receiver, but no one that will leave DBs shaking in their shoes.

But… Do I really want to go against Nick Saban in a game like this?

I hate to play that card, because it just sounds so lame. Well, lame you’re gonna get. The fact of the matter is that I just trust Saban and his staff so much more when it comes to putting together a game plan in situations like this. Same thing goes for in-game adjustments.

Wish I could give you more than that, but it all boils down to this: I’ll roll with Saban.

Tom Perry’s Take: Alabama is going to neutralize the Honey Badger and run the ball like no other team has been able to do against LSU. I could see Trent Richardson having a Heisman-winning type of game. Plus, I just can’t pick against the genius of Nick Saban.

This one is going to be fun.

Some poke fun at coining this game “The Game of the Century” and while that may be overreaching, it is mostly jealousy.  Alabama and LSU are where you want your school to be, don’t lie. Now finally the big game has arrived.

Alabama has only allowed one team all season to go over 100 yards rushing, Penn State which had 107.  Alabama is only allowing 1.67 yards per rush and only two scores on the season.  The longest rush of the season given up by Alabama was 31.

On the other side LSU has only allowed two teams to go over 100 yards rushing, Florida 113 and Tennessee 111.  On the year LSU is allowing 2.5 yards per rush, and have allowed 5 scores on the season.  The longest rush of the season given up by LSU was 29 yards.

While these teams are quite possibly the two top in the country – there is no luck behind it.

This game is the culmination of two great coaching staffs and two great teams meeting for a leg up in the Crystal Ball Run.

Some numbers to ponder:

As even as the two teams are defensively – the same rings true on the offensive side of the ball.  LSU and Alabama are No.’s 1 and 2 in the SEC in points per offensive drive this season.  LSU is averaging 2.76 points per drive and while Alabama is averaging 2.65 points per drive.  These two teams are also one and two in the SEC in drive efficiency – with LSU scoring on 49.5 percent of its drives and Alabama on 48 percent.

Confused enough about this game? Yeah me too.  So what gives?  This is a game that will come down to the fourth quarter.  Alabama has a +61 (69-8) scoring margin in the fourth quarter – leading the SEC – while LSU is tied with Arkansas at +50. (78-28). This is about big-time players making big-time plays in four quarters of action.

Kevin McGuire’s Take: Absolutely love this match-up because I am a fan of defense and running games. That is exactly what this one is going to come down to. Alabama plays a more physical defensive style while I think LSU plays a more athletic style. Both get the job done but in a game that I expect to be a bit of a slugfest I will give the slightest of edges to Alabama. I also suspect that Alabama’s offensive line will have a dominant performance and wear down LSU’s defensive front as much as anybody can, while Trent Richardson pounds out some yards in key moments to extend drives for the Crimson Tide.

I don’t think either teams has a distinct advantage over the other in any category, although after looking at it some more following my discussion with Michael Felder on my podcast, I would give a special teams edge to the Tigers. But this game, as many are, will be won in the trenches, and I think Alabama thrives just a little more in that area.

Michael Felder’s Take: Early in the week I loved the Tide because of my belief in Nick Saban’s prep and this teams ability to field an almost carbon copy height-weight roster of an NFL team. The Tide is the prototype for every college football team in the country and if your coach could trade with Nick Saban odds are he probably would because, let’s face it, your team doesn’t look, act or play like this one.

Then as the week wore on my roots started to affect my head. I’m a Les Miles guy. I have been a Les Miles guy since he took over the job from the departed Nick Saban. He’s a football players coach and he doesn’t much care what fans or media think about his style. There’s a level of admiration in seeing a guy who instills true confidence in his players, not just his own scheme or teachings. The players work, not the scheme.

I’m going to roll with the Bayou Bengals, not because they’re necessarily better but because on gameday I never bet against Les. Saban’s team will be more prepared schematically but Les’ team doesn’t mind getting a little wonky when it hits the fan.

Aaron Torres’ Take: Unlike most everyone here on this website (and nationally, really), I actually didn’t have too much of a tough time making this pick. I didn’t lose sleep, my hair hasn’t turned gray, and I haven’t seen Nick Saban in my dreams (or maybe “nightmares” is more applicable).

LSU is going to win this game.

There is just something about this team. It doesn’t matter the circumstance, the venue or opponent, or who may or may not be playing because of suspension or injury. This team just finds a way to win, and win big. They’ve played against ranked teams on neutral fields, road venues and at home. They’ve played without their starting quarterback (Jordan Jefferson), and arguably their most important defensive (Tyrann Mathieu) and offensive players (Spencer Ware).

Yet regardless, every game has ended the same. LSU has gotten up early, and then suffocated the opponent with a power run game, and overwhelming defense. They did it against Oregon. And West Virginia. And in SEC play against Tennessee, Florida and Auburn. All different opponents, with different coaching and playing styles. All double-digit victories for LSU.

That’s no knock on Alabama, they’re a great team.

But LSU is a transcendent one. They’ll find a way to win Saturday.

(And for the record, I absolutely, positively did not see Felder’s pick before I made my own. If you don’t believe me, I even posted it here)

(In addition, our Matthew Elder- who writes a weekly “small school” column for Crystal Ball Run, weighed in with his take on the top NFL Draft prospects that will be featured in this game. Enjoy!)