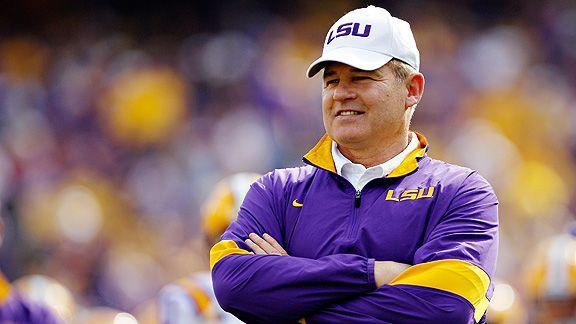 Ask any college football fan and they’ll tell you that while the Chick-Fil-A Bowl might not have the cache of some of the “bigger” games this postseason, few will be as entertaining as the matchup between Clemson and LSU in Atlanta Monday night. No, a championship won’t be determined at the Georgia Dome, but even a performance by Justin Bieber couldn’t make New Year’s Eve any more rockin’. Clemson and LSU are going to end your 2012 in style!

And while the Chick-Fil-A always fun, the 2012 version of the game seems to carry extra weight; it not only features two 10-win teams, but two clubs who got those 10 wins in completely different ways. Clemson continues to score points in bunches with rising coaching superstar Chad Morris at offensive coordinator, while LSU is and always will be defined by their defense.

It’ll be a classic battle of offense versus defense on Monday night in the Chick Fil-A Bowl.

Now, let’s see who has the edge heading into the game.

While Johansson might not quite be the queen of Hollywood, she’s pretty darn close. Heck, if you asked 100 warm-blooded American males, my guess is darn near 100 would be willing to chop off an arm, leg or at least a finger to hang out with her for an evening (I mean after all, do we really need all 10 of those fingers? I don’t think so.).

Now granted, it’s hard to imagine anyone doing anything that extreme to get a ticket into the Georgia Dome on New Year’s Eve (although you never know with college football fans). But at the same time the Johansson comparison seems applicable: If this isn’t the “best” bowl game of the 2012 season, it’s certainly in the discussion.

A Word About Our Sponsor: So yeah, I’m guessing you’ve probably heard of Chick-Fil-A by now. You know, that company that claims that they “may not have invented the chicken, but they did invent the chicken sandwich.” You’ve seen those cheesy commercials, right? Good.

Yeah, well that company has hundreds of franchises worldwide, including 68 in the Atlanta region alone. They seem like an entirely appropriate host for a Southern-based bowl game.

Aces: So we mentioned that offense, right? I thought so, and when these Tigers do take the field on Monday night, it will be with one of the fastest-paced, highest-scoring attacks in college football. On the season Clemson scored a staggering 42.9 points a game, thanks in large part to ACC Offensive Player of the Year Tajh Boyd. In 2012, Boyd threw for 3,550 yards and 34 touchdowns, numbers which ranked him in the Top 15 in both categories.

Deuces: Speaking of that 10-2 mark, umm yeah, let’s talk about that for a second. Because while it looks great on paper, the execution of those 10 wins is a bit concerning for us. In particular, we’ve got to ask: Who is Clemson’s best win this season?

Again, we’re not knocking the Tigers, but they played a grand total of two ranked opponents all season and lost to both, in games that- to be frank- weren’t even close. On the flip side, of their 10 wins, the only one which came against a club with more than seven wins was, ahem, Ball State. Not exactly a college football super-power, ya know?

I guess what I’m trying to say is that as much as we know about Clemson, we still have a lot to learn.

Wild Card: I mean, how could it be anyone other than Sammy Watkins? The sophomore started the year suspended for two games and never really got going after that, finishing with just 57 catches for 708 yards and a meager three touchdowns on the season. Those numbers pale in comparison to his true freshman season where Watkins caught 82 balls for 1,219 yards and 12 touchdowns and was named to just about every Freshman All-American team in college football.

Well, after a disappointing season like that, you think Watkins will be stoked for this game? Especially going against an LSU defense in which two of their top three corners are true freshmen? Yeah, we thought so too.

Aces: Like pretty much every other year since Les Miles took over, the 2012 LSU Tigers success starts with its defense. A unit which was expected to take a step back after losing Morris Claiborne and Michael Brockers to the pros and Tyrann Mathieu to suspension in the off-season barely missed a beat, finishing in the Top 15 nationally in total defense (No. 8), scoring defense (No. 11) and rushing defense (No. 9). A young secondary “only” finished ranked No. 18 in the country in pass defense. Shame on them, huh?

Add in a running game that featured seven different players who scored a touchdown and four who finished the season with at least 350 yards rushing, and as we all knew… It’s good to be Les Miles.

Deuces: Of course as good as the running game and defense were, there is that tiny little problem of quarterback play, and at LSU in 2012, as much as things changed, they’ve stayed the same. This is a program that hasn’t seemed to have quality quarterback play since Matt Flynn left in 2007 but was expected to get a bump in play when Zach Mettenberger stepped into the starting role this fall.

Only that didn’t happen and Mettenberger finished his first season as a starter completing just 58 percent of his passes with 11 touchdowns. For comparison’s sake, the opposing quarterback in this game, Boyd, threw for 14 touchdown passes… in his final four games of the regular season.

It also poses the following question: If Clemson can jump out on LSU early, will the Bayou Bengals have enough fire-power to catch up?

Wild Card: Is it too cliché to call Les Miles the Wild Card in this game himself?

If so forgive us, but if there’s one thing we’ve learned through the years it’s that Miles isn’t afraid to throw a wrinkle into the game-plan, and do it when the opponent least expects it. Be it a fake punt or simply by going for it on fourth down, there’s a reason he’s garnered the nickname, “The Mad Hatter.”

Remember also that at the end of the day that the Chick Fil-A Bowl is in fact just an exhibition. There isn’t a championship on the line, no game to prepare for next week.

Because of that, expect Miles to let it all hang out Monday night.

So You Don’t Forget: LSU will take the field without the services of Brad Wing, a one-time All-American punter. Wing was suspended for this game a few weeks ago, and at the time decided to declare himself eligible for the NFL Draft.

In a game which field position will be LSU’s best friend, this could be a huge loss.

Crystal Ball: The more we evaluate this game and look at these two teams, the harder it is not to think about that 0-2 mark Clemson had against ranked teams this season. For all the success the Tigers had against everyone else, the Tigers had two showcase games and came up empty in both.

So what we’re trying to say is that while it isn’t unimaginable to see Clemson pulling out a victory Monday night it seems like a much safer bet relying on the tried and true run game and defense of LSU. Especially when you consider that Miles is 5-2 in bowl games in his career, including a Chick Fil-A Bowl victory on New Year’s Eve in 2008.

For all his opinion, insight and analysis on college football be sure to follow Aaron on Twitter @Aaron_Torres.