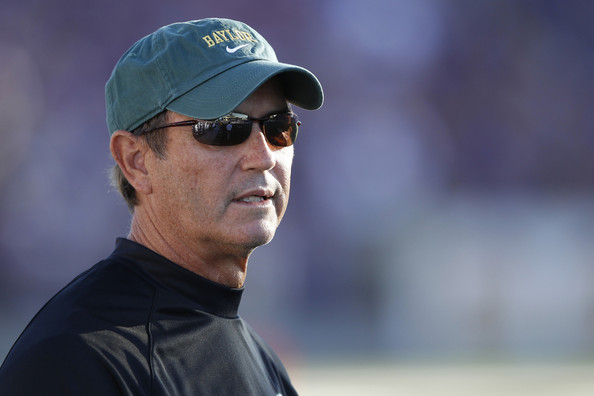 SAN DIEGO— If there is one, single appropriate way to describe the 2012 Holiday Bowl, it might be as the “bizarro game of the college football bowl season.” UCLA entered Thursday evening as a heavy favorite, with their opponent, Baylor viewed by most as a high-scoring sideshow, expected to throw the ball all over the field and do little else.

Well Baylor did throw the ball Thursday night, although with less frequency than they have all year. Instead they used their defense and running game to dominate UCLA from start to finish in a 42-26 victory that wasn’t nearly as close as the final score indicated.

And as crazy as it sounds, the win was as much thanks to Baylor’s defense as anything the offense did. For a unit which was the butt of bad jokes after last year’s Alamo Bowl and amongst the worst nationally during the 2012 season, this was undoubtedly their most complete game in a long time.

“We had answers,’” Baylor defensive coordinator Phil Bennett said on the field following the victory. “It was the staff, and I think the players were into it. Last year we didn’t play well against Washington, and we wanted the challenge of playing a Pac-12 team.”

Well to quote Barney Stinson from How I Met Your Mother, “Challenge accepted!”

Looking at the stats, what Baylor did on Thursday night against UCLA was simply mesmerizing. The Bears- who ranked 123rd out of 124 college football teams in total defense entering the game- held UCLA to just 362 yards, more than 100 below their average of 474 with most coming after the game was well out of reach. Baylor also held the Bruins well below their 35 point a game average in 2012, with UCLA’s final touchdown coming on the final play of the game. Again, the game was much more one-sided than the final score might indicate.

But to speak strictly about the stats would be to take away from how dominant Baylor’s defense looked simply by watching it. No, it wasn’t just about the raw numbers Baylor allowed, but more importantly about how they allowed them. Bennett said his team had “answers,” and watching Baylor all night, that certainly seemed the case. When UCLA dropped back to pass, the Bears defensive linemen tipped passes and their defensive backs jumped balls. When UCLA tried to run sideline Baylor gobbled them up behind the line of scrimmage. And for poor Brett Hundley, no matter what he did, he just couldn’t escape Baylor’s pass rush. The Bears finished the game with a season-high six sacks, and it seemed like there were two dozen more times where they pressured Hundley into rushed throws.

Beyond just the defense though, you can’t talk Baylor without discussing the offense. Only on this night, the story wasn’t Nick Florence, Terrence Williams and the pass game, but instead all about the run game. Baylor’s offensive line dominated the line of scrimmage, allowing for easy running lanes and for the Bears’ to attempt their fewest passes of the entire season. Florence threw the ball just 13 times on Thursday. It was just the second time he attempted under 30 all season long.

“Best o-line in America,” Florence said. “Hats off to the o-line, that’s all I’ve got to say.”

It certainly looked like that against UCLA on Thursday night, when Baylor battered UCLA up front and finished the game with 306 yards total rushing. To put some substance behind the numbers, just know this: Baylor had three players finish with at least 37 yards rushing; UCLA All-American running back Johnathan Franklin was held to just 34.

The star of the game was the Offensive MVP of Thursday’s Holiday Bowl, former Oregon running back Lache Seastrunk. Seastrunk made headlines a couple weeks back when he proclaimed himself as the early Heisman favorite in 2013, but against UCLA showed that proclamation might not be all that far off. Seastrunk finished with 138 yards rushing, while Glasco Martin finished with 98 yards and three scores.

Reflecting in on the big picture, it’s easy to see just how much this win meant for Baylor as a whole. This is a school with little football tradition and a program that was expected to take a major step back in 2012 after losing Heisman Trophy winner Robert Griffin and fellow first round draft pick Kendall Wright as well. Instead, Briles continues re-write the school’s record books as head coach of this team.

Baylor entered the Holiday Bowl with seven wins for the third straight year, marking the first time since the 1949-51 seasons that has happened. They also finished the regular season as college football’s best offense, a remarkable turnaround for a program that ranked 85th nationally in the year prior to Briles’ arrival. Most importantly, the program thrived even without Griffin; not only did they win their second straight bowl game for the first time since 1986, but individually, Florence broke RGIII’s single season passing record on Thursday night.

Clearly, the present is bright in Waco, and with Seastrunk and a handful of other key players returning, the future appears to be the same as well.

On Thursday, they not only beat UCLA.  They proved they have long-term staying power on the college football landscape.